Of the many changes being introduced in Dominion, there was none more thoroughly subjected to scrutiny than how ownership of star systems will change hands.

While the basic mechanics have remained the same, the actual flow of how conquest works has been under constant revision for weeks.  This speaks highly of the solid work done on the Infrastructure system and how it will allow us to continue improving this aspect of the game in future releases.

To arrive at this point we have walked the design past all of our designers and discussed the various aspects at great length.  Most importantly, we delayed finalizing this part of the design because we wanted to maximize our interactions with the EVE community. By reading your forum feedback, speaking with the CSM and listening to you at FanFest, it is reasonable to say that this feature of Dominion has had more influence from the players than any other we've done.

As I said earlier, there have been numerous iterations on this process.  The whole idea is for the null-sec battlefield to be much more dynamic and force both attackers and defenders to make choices.  To summarize the design at its most basic level, here are the primary goals we set out to achieve:

We have removed starbases from their previous role of being sovereignty structures.  The old game of spamming towers and waiting seven days for them to negate another alliance's territorial claim are gone.  In Dominion if you want to take someone else's land, you are going to have to fight tooth and nail for it.

Before we look at the actual path of conquest, there are a few new structures we need to introduce you to and explain their functionality.

This is your TCU: 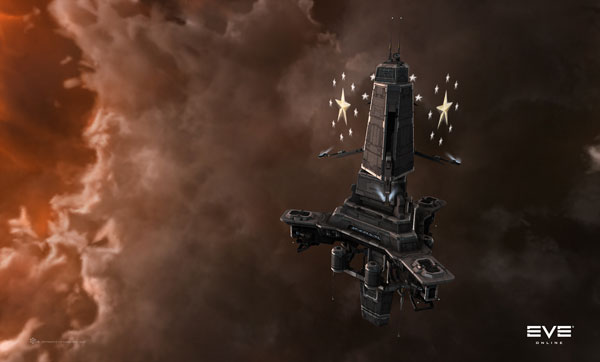 When you enter an unclaimed system, you plant your TCU in order to establish a link with the stargates present and claim the system as your own.  Your own alliance logo will be proudly displayed for all to see.  Once your TCU is online, you will be responsible for the monetary upkeep of the system and your TCU will become an invalid target in the local data net.  TCUs are the symbolic representation of your commitment to a star system in EVE.  When your TCU falls, so does your control of the system.

Depending on your approach to how you live in nul-sec, meet your new best friend / worst enemy.  SBU(s) represent an attacker's intent to take away what is yours.  They are the battering rams pounding on your doors... erm, stargates.  When a SBU is onlined at a stargate, it disrupts the connection linking your TCU to them.  If this is done at 51% of the gates in a system, your sovereignty control is in jeopardy and you've got some work to do (killing these things).

Infrastructure Hubs are what allow you to develop your sovereign space.  They are the key to making sure you can do everything from anchor Jump Bridges and Cyno Jammers to improving the spawn rates of certain types of anomalies and even affect the appearance of wormholes.  Another blog will go into more detail about the upgrades and how the Hubs work but for now you need to know that the Infrastructure Hub is also one of the key defensive structures of your sovereignty.

In Dominion, both Outposts and Infrastructure Hubs will have a dual reinforcement timer, one for shields and one for armor.  Owners of the structures will be able to set a preferred time that they wish for them to come out of reinforced mode and then a random variable will be applied that determines the exact time they will exit reinforced.

This mechanic serves two purposes in that we do not want to see station ping pong return and we also want to try to mitigate ‘time zone warfare'.

How does all of this work? 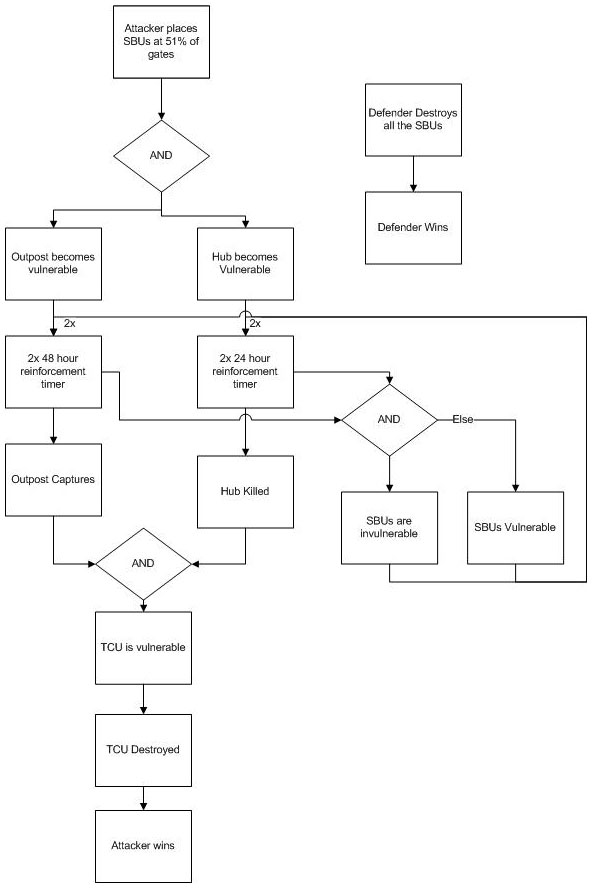 As you can see, both Outposts and Infrastructure Hubs play a part in how a battle might play out.  What is not immediately obvious is how SBU(s) can affect this dynamic.  It is easiest to explain this by detailing the various conditions which can exist in a system and the different structures interdependencies.  You can consider these the ‘rules' by which the chart above works.

Both structures have dual reinforcement timers to avoid being blitzed by an attacking force.

The Outpost has 2x 48 hour reinforcement timers to ensure at least 4 days between it switching hands.

The Infrastructure Hub has 2x 24 hour reinforcement timers to ensure at least 2 days before it can be destroyed.

SBU(s) are vulnerable while being anchored and onlining.

Once an Outpost and/or Infrastructure Hub is reinforced, the SBU(s) enter a parallel reinforcement cycle. That means that the SBU(s) are invulnerable as long as there are no vulnerable structures in system.

Should the attacker at any point lose control of a number of SBU(s) that makes the total number of gates covered less than 51%, the siege is considered over. The Outpost / Infrastructure Hub will revert to an invulnerable state until a time where the attacker re-establishes onlined SBU(s) at more than 51% of the system gates.

Systems with no Sovereignty but with an Outpost

Systems with Sovereignty but no Outpost or Infrastructure Hub

As the attacker, do you go for your enemy's Outpost or his Hub?  How much force do you commit to each objective, knowing that you also have to prevent the defender from eliminating your SBU(s) that are making his structures vulnerable?

As the defender, do you try to prevent your opponent from advancing further with an active defense of your structures?  Or do you mount an all out counter-offensive against their SBU(s), risking your fleets to bring the siege to an early conclusion?

Transition from Apocrypha to Dominion

What's going to happen to my stuff?!

When Dominion launches on December 1st, your Cyno Jammers, Jump Bridges, Cyno Beacons and Capital Ship Assembly Arrays will all keep running.  During downtime of Dominion patch day, we will run a script that checks to see if a system is held by an alliance.  If it is, a TCU will be automatically anchored and onlined.

We are going to back-date each Alliance's sovereign claims into the new system so that they properly reflect the amount of time each system has been held.  This allows you to meet any of the time requirements needed for certain structures.

You will then have seven days, until December 8th, to set up your Infrastructure Hubs and install the upgrades you wish to have.  Essentially, there will be a week-long grace period before the new rules of the Infrastructure system apply to any structures which require an Infrastructure upgrade. This will allow you the time to do some shopping, build and install your desired upgrades and get your defenses in order.

When the grace period is turned off on December 8th, you will need to have the appropriate upgrades active in your systems, otherwise the structures which require them will go offline.

From the beginning we wanted to ensure the new design would be able to incorporate new content or changes with minimal disruption to the day to day goings on of alliances in EVE.  The choices above indicate only the beginning of what we can do with this new system.  Once the dust settles and we see how the new system performs, we will begin to look at adding additional elements for both the attacker and defender to use.

There were many ideas we had to drop from Dominion or push back to a future release.  The main reason for this is that when making changes on this scale we felt it best to ensure everything currently in game now worked properly before adding additional elements or layers.

We are working hard to get every bit of this into your hands on the test server so please watch the Test Server Forum for event announcements.  We are monitoring your feedback on this feature very closely and will continue to refine it right up until Dominion launch day.