EVE Fiction: A Note From a Professional Liar

Hi folks. I'm CCP Abraxas; you may know me from such dev blogs as "Hey, we're going to do a lore wiki" and "Oh wow, we did a lore wiki".

I'd promised that I would keep you abreast on future developments of our lore, and now that I've got a better handle on how it all went and where our priorities lie - including new parts that I hadn't announced in the last dev blog - I wanted to drop you a quick note to tell you where we're headed.

As a side note: While admittedly I am, like all fiction writers, basically a professional liar, I assure you that I will tell you the truth. Not those other guys, they can go to hell - but you and me, we've got a connection. We've seen things.

I'm actually amazed at how well the Fiction Portal launch went. Most people seem really happy with it, which is a good thing to hear after you've devoted a year of your professional life to that very aim. The most important part of the launch, to me and Mercury and everyone else involved, was that nothing would break badly enough to put a major damper on your ability to access and enjoy our content.  So far, so good.

In the weeks since launch, we've done a ton of minor edits to various pages. This includes not only aesthetic ones (including spellchecks, style checks, and unifying the '(tag)' suffixes we used to differentiate our lore from similar pages), but also reviewing several dozen page comments on lore consistency and improvement suggestions. This is something we'll be doing constantly from now on. If you ever feel that a Fiction Portal page is in error, use its Discussion tab to let us know. If you have more general comments about the Portal, post on the Fiction forum section. I review all threads that have anything to do with the EVElopedia, and note down anything we can use to improve it.

What we haven't done is add a ton new content. We want to do so in strategic fashion, so that you won't always have to trawl through the extant thousand pages of lore just to see if anything new got added. For the most part we'll be adding articles alongside patches and expansions; there was a small bunch coming out with the January release, for example. In terms of future expansions, CCP recently nailed down what we'll be working on and releasing up to and including this summer, so Mercury and I are hard at work right now figuring out what new lore we want to write up for you guys to tie in with those features. If you ever want to see what's new, just head on over to the Updates and Credits page.

Aside from articles tying into expansion features, there is a lot of published content we haven't yet gotten around to writing up in wiki form. We have almost the entire news archive to go, plus the three EVE novels, various bits and pieces of other published work, and, of course, our in-game PvE content. Major aspects of our canon, including the factions and notable persons, also need a going-over soon. Moreover, we want to rewrite the entire chronology section so that it'll be event-focused rather than purely date-focused. And somewhere, over the horizon, there is the fabled in-game connection, which I'll be quietly working on in between other content projects.

(A side note on in-game content and live events: The Arek'Jaalan project is a special case, and CCP Dropbear and I plan to figure out a workable way to transition A'J info into official canon.  It'll happen, but it's probably going to take a while.)

There really are three major points I'd like all of you to take away from reading this part of the blog: Firstly, we plan to do a lot more for this project. Anything new will get announced on the Updates page.

Second, it's all going to get done, albeit at a slow but steady pace. It's a great deal of work, and most of us at CCP have a lot on our plates these days, but I have a pretty good track record when it comes to delivering what I promised (such as the Fiction Portal itself).

Third, and very importantly: All of this is only possible thanks to the amazing efforts of our Mercury volunteer team. If you want to help contribute to our fiction, you should defintely consider joining them. 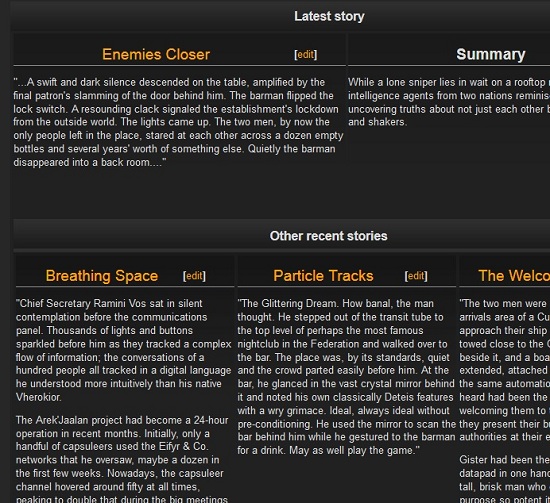 The EVE Chronicles are, for the most part, a collection of over two hundred short stories set in the world of EVE. I wrote about a hundred of those, over a period of four years - it was basically the biggest part of my day job at CCP before I switched over to doing the Fiction Portal and various other things - so I've been heavily involved with them for quite a while, and I want to make sure they're treated right.

Ever since beta times, they've been hosted several layers deep on the eveonline.com site. They have long since outgrown their place there, and now that eveonline.com is going to be given a total, streamlined redesign, we figured it was high time we moved them to somewhere that was a bit more amenable to EVE fiction. The natural decision was to create a separate portal for them on the EVElopedia.

Here's what this means for the chronicles from now on (not 'going forward', because I don't even know what that phrase means.) We'll need help from you, so look to the end part for that.