"You died not when you expired, but when your life was neatly packed away."

That's at the start of the novel. Actually, a lot of people die very soon after, and not very neatly, either. 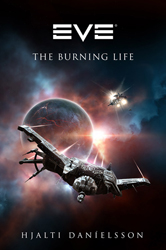 The novel is called EVE: The Burning Life, and it's out now in the UK and very soon in the US (March 30th). As per the title it takes place in EVE, or New Eden rather, and tells the story of ...

Well, in one way it's the story of two people who go through a boatload of hurt, but it's also a story about the empires, and the pirate factions, and how all of us reading this have come to dominate their world. It's almost a travelogue: We get to see Gallentean bodymod conferences, Amarrian convents, Caldari Mind Clash games, and a strange Minmatar exodus. There are the Angels, all marching in step; and Guristas, living their crazy lives. There are the Sansha, in their quiet metal hell. And the Sisters of EVE, trying to save a few souls along the way. They're important to the story.

It's a novel about revenge and redemption, about putting away old things - or settling scores, depending on who you ask - and moving on. About change, really, which is a concept every EVE player will be intimately familiar with. We're good at adapting to new circumstances. We're also pretty good at revenge.

"They went in through the eyes"

That's near the middle. It's a creepy part, though not in the way you'd think. It's fun to subvert the readers' expectations, and the novel hopefully manages to do that a few times. As much as The Burning Life is science fiction and takes place in a dark, brutal future universe, it is, like fiction should be, about people. Spaceships come and go (and get blasted to pieces), and there's terrific fun to be had from describing all the ways they can be destroyed, but it's even more fun to write about the wonderful, terrifying, beautiful, awful, desperate and above all surprising things that people get up to when you put them in a bad situation, make that situation even worse, and then push and keep pushing until something gives way. I don't believe in starting stories with action or crazy mad excitement; the reader has no emotional investment in the characters yet, and completely lacks the orientation to realize the full extent of what's happening. Instead, I like to start stories right after something terrible has happened, and pay close attention to the aftermath. That's when you see the truth. That's when people show you what they're really like.

I'm fascinated by good people who do bad things - for, I should add, reasons that they feel are entirely justified. Nobody's a bad guy in their own mind. And even though I have a reputation for writing spooky stories, I keep returning to the idea of humanizing the horrors of EVE. One of the starting points for The Burning Life came out of my obsession with the Blood Raiders, a spacefaring part of the Sani Sabik. The Sani Sabik worship blood, and the Blood Raiders actively harvest it. Raiders are scary people who fly scary, red-mottled spaceships. But you can't build an empire solely on scariness; people simply don't work that way. Terror and oppression, certainly, those are tried and true ways of keeping your populace in order; but if every single inhabitant in your faction is eagerly engaging in the kind of balls-out craziness that drives them to kidnap spaceship crews and suck out their blood, something has gone rather spectacularly wrong. A nation of billions is not composed solely of bloodthirsty crazies.

So what do the rest of the Sani Sabik do? How do you, as a presumably sane and well-adjusted person in that faction, reconcile your normal (albeit religiously devout) life with the idea that somewhere out there, someone is kidnapping, mutilating and murdering innocent people in your name? What kind of stamp does that leave on your society? If a nation can adjust to that incredible, frightening peculiarity, where else will you see its effects?

In short: What if these are real people, trying to live their real lives? Same goes for the ones who reside on the space stations, and the planets, and on the fragile, unprotected, easily targeted asteroid colonies. What if it's all real? What are their lives like, down there?

That's right at the end.

In time we may tell many different stories, but in a way it's always the same basic experience. I've published eighty short stories, had two plays performed at Fanfests, written a bunch of in-game text and other unpublished EVE stuff; and now there's a novel with my name on it. Each time, you share what's inside your head, but more than that, you share your experiences with the world: How you saw them, what you thought of them, and what happened next.

The Burning Life is the same novel as it was almost a year ago, but it's been polished and fixed and rewritten and tweaked in countless ways. The editors - Simon Spanton at Orion/Gollancz and Eric Raab at TOR - deserve thanks, and thanks upon thanks, for all their hard work. I spent a weekend in the TOR offices going over the novel page by page by page with Eric, and believe me, when you're a young editor living in New York and working in an office that overlooks the very heart of Manhattan, there are many things you could be doing over the weekend other than editing my book. It's a joy to tell stories, but you need good people with sharp eyes to ensure it's fit for others to enjoy. A story is not a proper story until it's been heard.

Likewise, a book isn't a book until it's been read. A book - a novel - is a shared experience. This one has existed in my head for over a year, and now, at last, it'll take on its own life. To me, the novel won't properly exist until it belongs to others, much in the same way that EVE doesn't exist unless it's a shared experience. There isn't just you: there's the people in your corp or alliance, the ones you mine with, the ones you fight alongside and the ones you fight against, and everyone you see on local, doing their own thing.

And then there are all the people you didn't see. The ones on the spacestations, making way for your passage. The ones on your ship, scrambling for their escape pods when you drop into hull and the bulkheads start smoking. The ones on the colonies, refineries, pleasure hubs and all those other places that exist only a as brief, bright explosion and loot drop site for the rest of us. Some of those people, they had a very definite experience because of us. Some of them very much want to share it. At least one of them wants vicious revenge. The Burning Life will tell you what he did, and why.

*Abraxas/Hjalti is a humble man. It is my solemn duty to help sell his dark mind's work.  You can purchase it in bookstores, for sure, but also online via Amazon UK and the Macmillan store US Version in a several formats. Buy his book. You won't regret it. - CCP Manifest