Fifty-Nine Down - Ship balancing for Retribution

We’re getting close to the December 4th release of Retribution, our 18th free expansion to EVE Online. Retribution includes big changes to our Bounty Hunting system, Crimewatch, Factional Warfare and much more, but the area I’m most excited about is the massive collection of balance changes we’re preparing for you all.

This expansion is where you’re seeing the balance team here at CCP really hitting our stride, and I’m extremely proud of what we’ve accomplished in the past couple months. We’re releasing 40 new or rebalanced ships in Retribution as well as bringing adjustments to many modules including missile launchers, electronic warfare, and the infamous ancillary shield boosters. Every time EVE’s balance changes it creates new opportunities for clever players to demonstrate their creativity and separate themselves from the pack. We know that our customers are amazingly creative with ship fittings and tactics and that if we give them a new set of tools they’ll do things better than we could have imagined with them.

Our plan for the Tiericide Initiative has always been to remove the old tiers systems that enforced inferiority for a huge portion of the ships in EVE, and replace it with a series of ship lines that stretch through multiple hull sizes. These lines are intended to just be a guideline for pilots so they can get a basic idea of what to expect from each ship as they advance and so that they can identify other ships to try once they have identified an aspect of the game they enjoy. The beauty of EVE is that once players get their hands on a ship they can use the infinite combinations of modules and tactics to stake out their own individual playstyle. CCP Ytterbium has covered the idea behind Tiericide in some of his previous blogs, and I’ll borrow this (now finally complete) image from him showing how the lines interact with the ships that will be rebalanced by Retribution:

We have also received many questions about whether this or that ship will get rebalanced. I can promise you that Retribution is only the beginning of our balancing work and you can expect more and more changes as we go forward. CCP Ytterbium recently posted a blog providing a taste of what we’re working on directly after Retribution, and for anyone wondering if we’re going to fix your favorite ship I have produced a simple flow chart that covers the issue comprehensively: 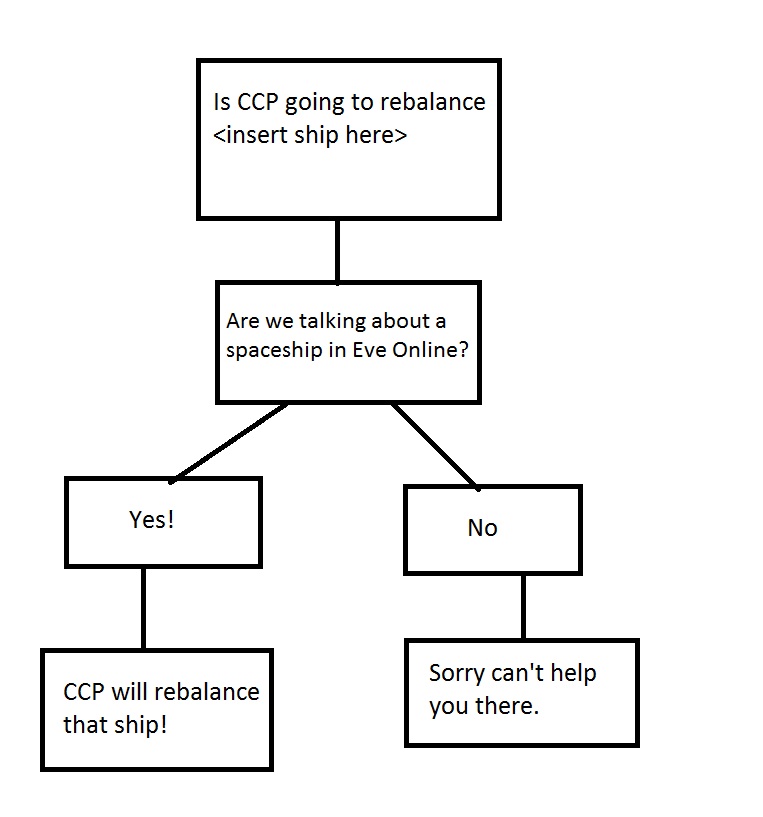 This dev blog is going to summarize the changes we have ready for Retribution in one place, so if you’ve been keeping up with each and every sticky in the Features and Ideas forum there won’t be much here to surprise you. For those people who have been journeying with us every step of the way so far I want to say thank you for your dedication and for all the great feedback you’ve given us. For everyone who hasn’t been watching dev posts every day, this blog will serve as your one stop shop for every major ship and module balance change in Retribution. Each section includes a link to the forum threads going over the changes in more detail.

We started the Frigate rebalancing back in Inferno with some of the Combat Frigates, and continued the work in Inferno 1.2 with the Attack Frigates and Rookie Frigates. These changes have been very well received and are providing affordable and fun tools for both new and old players. In Retribution we are completing the Tiericide of the Frigate class, rebalancing the remaining 15 frigates and adding one new ship in the ‘Venture’ Mining Frigate.

The Combat Frigates are the frontline brawlers of the frigate world. Capable of both taking and dishing out beatings, they are versatile and powerful in the hands of a skilled pilot. Combat Frigates are some of the most cost-effective solo PVP ships in the game, and are especially well suited to take advantage of the frigate-only complexes in Factional Warfare contested space.

The Disruption Frigates are built to support their allies and weaken their enemies through electronic warfare. These ships are most ideally suited to group play and offer an excellent way for new players to contribute to their corporation in PVP.

The Support Frigate class is all-new in Retribution. Remote repairing is a huge part of EVE’s fleet combat, but until now there has not been an effective repping ship that was cheaper or easier to skill into than the extremely powerful Logistics Ships. To help with this problem we are introducing a new line of Support ships at the T1 frigate and T1 cruiser levels to provide new options for people wanting to keep their allies alive. The Support Frigates are easy to train for and agile enough to keep up with a frigate roam. They can also enter even the smallest Factional Warfare complexes. To work alongside the ship hulls we have also rebalanced the fitting requirements of the small remote armor and shield repairer modules. We’re very excited to see how all of you take advantage of these new roles.

The Exploration Frigates are getting an expansion of their role beyond their aptitude for scan probing. They are still the ideal ship for the budding prober with improved bonuses to scan probe strength, but now they also have bonuses to the core mini-professions of Hacking, Archeology and Salvaging as well as boasting stronger combat ability through ample dronebays.

With the conversion of the old mining frigates into Support Frigates there was an opening for a completely new Mining Frigate from the ORE corporation, to provide both an effective ninja-mining platform and a stepping stone into ORE’s selection of Mining Barges (rebalanced in Inferno 1.2).

Our current crop of Destroyers were in a fairly good place after their last rebalance in the Crucible expansion, so we gave them a less invasive set of tweaks than most other classes. Fitting within the Attack role, Destroyers are intended to be deadly hunters of Frigates that hit harder than their opponents would expect, and the changes made to these ships reflect the desire to make them all useful for that purpose.

In Retribution we saw an opportunity to release some new ships into the previously very small Destroyer class. Destroyers are extremely popular ships that players of many stripes have been enjoying but with only one Destroyer per race the options were very limited. Retribution brings four completely new Destroyers that use the other main weapon system for each race.

Like their frigate counterparts, the Combat Cruisers have a solid balance of offense and defense. They are slower and heavier than the Attack Cruisers but are able to field a much stronger tank at respectable speeds.

The Attack Cruisers are the fastest and most aggressive of the fighting cruisers. They are all built to take advantage of their speed, either by keeping range from their opponent and peppering it with long range damage or by charging into battle to deal excellent damage at close range.

The Disruption Cruisers are built for electronic warfare support and are split roughly into two categories, the hybrid disruption/combat Arbitrator and Bellicose, and the range-bonused fleet ewar ships in the Blackbird and Celestis.

Another very exciting set of Retribution changes can be found in the Support Cruisers. These ships are currently attempting to straddle the roles of mining cruiser and support ship and generally failing at both. We’re refocusing these ships as pure support vessels that can work alongside their more expensive Logistics Ship brothers. A guiding principle in the design of the Support Cruisers is that they should be able to fit into a fleet that has a mix of T1 and T2 support vessels. When a newer player shows up to a fleet in one of these ships we expect that the FC will welcome their help rather than scorning their youth. All of these ships also benefit from the reductions in fitting requirements for medium remote reps.

There are a number of changes to turret weapon fittings we are making in Retribution to go alongside the ship changes.

CCP Soniclover and Team Superfriends are doing another balance pass on the special modules they introduced in Inferno, as well as adding a new module and new drone: the Micro Jump Drive and Salvage Drone!

Thanks for sticking with us through this giant list of balance changes for the Retribution expansion. I’m very excited to see how these newly balanced ships and modules get used by all of you.

If you want to try out all these changes right now, they are live on our Buckingham public test server for your enjoyment. To help get you in the mood for new awesome Cruisers we will also be holding a special Devs vs Players brawl on Buckingham this Thursday the 15th of November (my birthday!) starting at 16:00 EVE time. Our last Devs vs. Players event focused on frigates and was a smashing success and we expect this will be no different.

Thanks again and look for the biggest ever set of EVE balance changes coming to your computers on December 4th with the free Retribution expansion!