Here at CCP, we know that our players are some of the most enthusiastic people in the universe when it comes to spaceship related warfare and carnage. With this in mind we'd like to make sure that while you guys are all trading ammunition and shrapnel with eachother, you get the best experience possible out of a fight.

Given that quite a substantial war seems to be brewing, we've been watching the fleet fight notification system and would like to clarify how it should be used to maximum effect in order that the correct nodes are properly reinforced.

The Fleet Fight notification system is completely automated, and only reinforces the actual solar system that is requested. We've noticed a few comments on fleet fight notifications over the course of the last couple of weeks that have contained things like "please reinforce this whole constellation", or similar requests.

While this is good practice for letting us know where the cluster is going to be heavily loaded, it does not guarantee that the correct system will be reinforced. Let's take the recent fight in Tribute as an example: 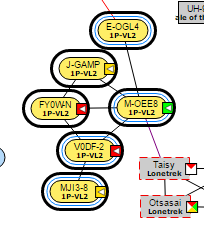 With the fleet meta that's emerging around the Aegis Sov mechanics, more often than not there is the need for either multiple systems or a whole constellation to be reinforced so that large scale fighting can take place. In the case of the fight in Tribute, only part of the constellation that served as the battle ground was reinforced, which resulted in varied performance in different systems in the area.

If you're planning to roll in and mess with eachother's claims to space, please make sure that you submit a request for each system.

With this being the first large scale conflict that's occurred in some time now, we're looking at how the fleet fight notification system is being used, how you guys are deploying, and what we can do to make this process more smooth in future, and may look to upgrade or tailor it to be more efficient as time goes on.

For now though, make sure you keep those requests coming, and that all systems you'll be fighting in are covered with requests to ensure that we can give the best environment to brawl in.