I am CCP Cascade, Associate Technical Producer working in the Core Technology Group. I have been given the role of Internet Herald to tell you about some of the projects the Core Infrastructure team, CCP Atropos, CCP Mandrake, CCP Sputnik, and CCP TopKnot have recently worked on. The team works on a lot of in-house tech that you don’t often get to see, but they also work on some pretty important stuff that you see every day, such as the installer, patcher and repair tool. You might know them from the forums or dev blogs like "Fixing Lag: And I, for one, welcome our new automation overlords," "When patching fails, repair" and "The EVE Repair Tool and You."

Most recently, they have worked on two projects: the Generic Patcher and the Multi Payload Installer.

To sum it all up:

The Windows full installer was previously available in two flavors:

Since the Incarna expansion and patches, the total size for the installer has exceeded 4 GB.

There is a hard limit on how large a single executable can be on Windows; that limit is 4 GB on 32-bit systems. Furthermore, operating systems that run on the FAT-32 file system have a 4 GB file size limit, so no file stored on a FAT-32 system can be larger than 4 GB. Most users do not run on FAT-32 anymore; NTFS is more widely used today. We decided on a solution that caters to everyone, whether they use FAT-32 or NTFS. We split the so-called payload (the compressed file containing the game) into multiple files.

So what does this mean to me?

Since you already (hopefully) have the game installed, probably not much. But if you were to reinstall the game or carry the client around on a USB stick, then there have been some changes that you should be aware of.

By downloading them and placing them into the same folder you can install the game just the same way you would have done before. The size, currently, isn’t that far over the 4GB limit; the current total is 4.5 GB.

If you are using the regular installer, the changes we have made are all in the background; as a user you will not notice it.

And as a bonus to resolving the 4 GB issue, we have added functionality for resuming downloads. If you happen to get disconnected, experience a power outage or just accidentally click cancel during the download, the next time the installer starts up it will simply pick up where you left it.

With EVE going through patches and expansions, the size and quantity of patches we create with every expansion/patch has increased and the older the client you’re using is, the bigger the patch gets. This is not only bad for you (more data to download) but makes our build and test times that much longer. This slows us down when there are fixes to roll out to Tranquility, so any reduction in the time required building and testing is a massive benefit to us. To cut down on this, we are currently limiting ourselves to building around 20 patches, which means that if you have a client which is older than 20 patches (generally a client that is roughly 8 months older or more) you would have to reinstall the game to be able to play. 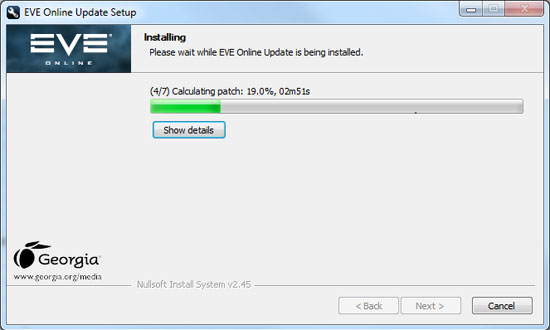 All of these changes mentioned here in this blog are improvements to make the installing and patching experience better and more convenient for you. We have already started working on the next steps which we are really excited about bringing to you, but more about those in a later dev blog. We also very much welcome your ideas for future stuff you would like to see in the feedback thread!