I didn't want that ship anyway

It was November of 2004, and CCP had just released the brand new Exodus expansion a couple of days beforehand. With extreme confidence, I dock up in Yulai X - DED Assembly Plant and purchased for myself one of the newly released ships, a Catalyst class destroyer. I then proceeded to spend over ten million ISK fitting the newest tech two modules to it.

I went forth, in search of war targets of my corporation at the time, and at the second gate I came to, I found an enemy interceptor. Still feeling confident - a destroyer is meant for killing smaller targets after all, I locked on, warp scrambled him and started firing. Certain of victory, with all eight blasters ablaze, I watched the shields and armor of my opponent rapidly fall. Not paying enough attention to the status of my own ship, I didn't notice the dire straits I was in until it was too late. I saw my ship explode, and realized just how essential fitting a stasis webifier when fighting interceptor class frigates really is. But that was ok, I didn't want that ship anyway. Or so I told myself, as I logged out in a fit of nerd rage, but not before a decent bout of local smacktalk though.

So, are you really as alone as you feel when you lose your newly purchased ship to an autopilot ‘malfunction', or misjudge a situation such as I did? Well, for the last few months, the number of ships getting blown up is something that we have started to monitor much more closely as a measure of activity within EVE. Realising that this subject is dear to the hearts of much of our player base, we decided to release some of the more interesting statistics.

So, where to start? Well, the obvious place would be just total numbers. All numbers and graphs in this blog exclude rookie frigate and shuttle losses, and only count ships lost in PVP combat (a player-piloted ship lost to another, or multiple other, player piloted ships). The total number of ship losses in April of 2009 was 198,885, or an average of 6,630 per day. At the end of April, we had 299,064 active paying accounts, leaving us with about 0.67 ship losses per subscriber during that month.

Whilst all of these numbers sound great, us in Research & Statistics at CCP do find, as we are sure you will all agree, graphs to be incredibly exciting. To quote one of my most esteemed colleagues: 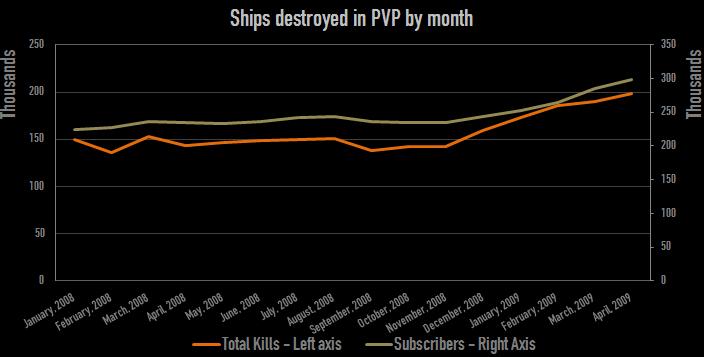 The graph above shows both ships destroyed by month (left axis), and the total number of subscribers at the end of that month (right axis). As you can see, unsurprisingly the number of ships destroyed has followed the subscription trends very closely. As such, the rapid subscriber growth as of late seems to be the primary cause of the increased number of PVP kills. 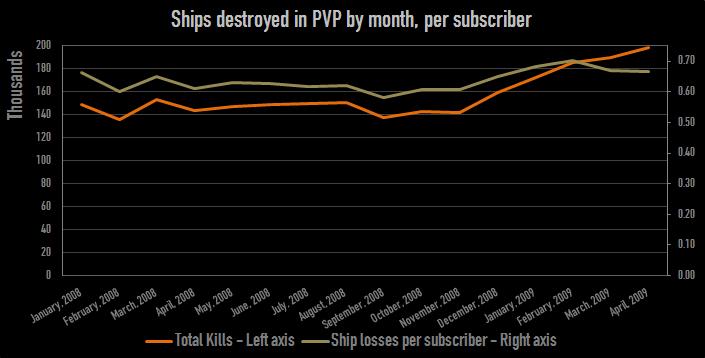 This is the same graph, but instead of total subscriber numbers, the average ships destroyed in PVP per subscriber. The drop in the average ships destroyed per subscriber in March of this year can to a large degree be attributed to the large influx of new players that was seen with Apocrypha. The increase from December 2008 through February 2009 is very interesting, and coincides with a large number of experienced players returning to the game over that period. 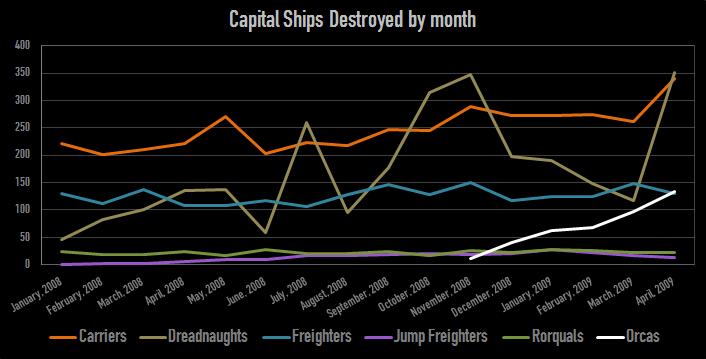 One of the things we found interesting when looking through this data, was the data for the capital ships. In particular, dreadnaught losses change a great deal from month to month, and can be easily linked with battles reported in those months, and the first quarter of 2009 seemed to not have many large battles involving dreadnaughts. This is less noticeable with the other capital ships, which tend to be used on a much smaller scale most of the time, whereas dreadnaughts are more often than not used in very large groups. 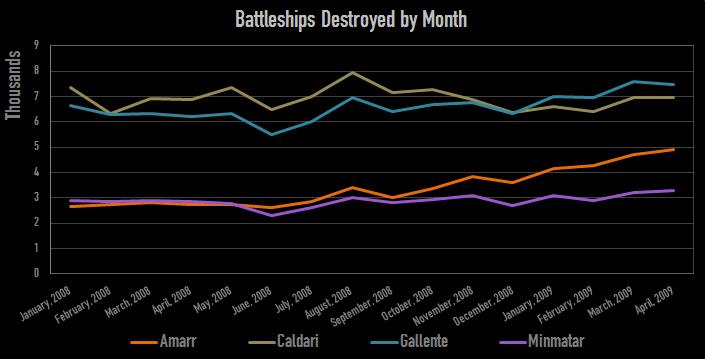 Above, the numbers of battleships of each race can be seen. The last few months have seen two interesting changes - Gallente battleships taking over from Caldari battleships as the most destroyed, and a very rapid increase in the popularity (or at least the destruction of) Amarrian battleships. 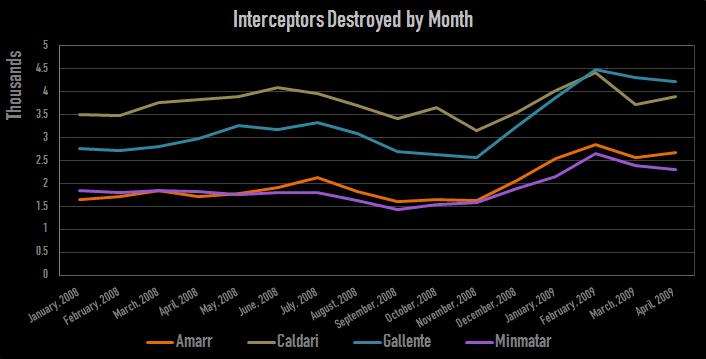 As you can see the ratios between each race in terms of interceptors compares very closely to those of the battleships. Gallente interceptors have recently taken the lead over the Caldari in terms of total destroyed. Interestingly, the interceptors of all races have gained a lot of popularity in recent months, after balancing changes with the Quantum Rise expansion in November 2008.

Well, that's it for this blog. We had considered going into much further detail, however considering the vastness of what could potentially be shown, we thought we would ask - what would you like to see? Please post in the comments thread with any feedback you may have.

As we are sure you will all be glad to hear, the QEN for Quarter 1 2009 is in its final stages and should be published within the next week.