U and I made some changes: Odyssey 1.1. UI changes

CCP karkur here with some news from the late Team Pony Express. You won't be hearing much more from the team in the future but that's all good because we recently formed one super team, Team Kuromaku, with the members from Team Prototyping Rocks.

I want to tell you about changes Pony Express made that are being released in Odyssey 1.1 with testing support from the new team.

Ok... let's me just start by saying that I know drone management is a bit of a mess and it needs a lot of love.

I'm not going to tell you that we are doing a total revamp of it in Odyssey 1.1 or solving all its problems, because that would be a lie. However, I will tell you about a few quality-of-life changes that will hopefully make the drone life a little bit easier.

Just to get it over with: I'm sorry, but no, we are not adding a "Launch Drones" shortcut now. Not because we are trying to be mean or anything (that's just a nice bonus ;)), but the fact that you normally organize and launch drones in groups makes it a bit tricky. Not at all unsolvable, but requires some design time and is a bit outside of the scope of these smaller changes now.

On to what we are doing: Those of you who have read my previous dev blogs probably know how much I like dragging and dropping, so of course we are adding some dragging functionality to the drone window! After Odyssey 1.1, you will be able to launch any drone by dragging it from the drone bay part of the window and dropping it either in space or onto the "Drones in Local Space" folder. And you will be able to do the same with any drone group to launch all the drones in that group.

To recall the drones, you can drag individual drones or drone groups from the "Drones in Local Space" section and drop them onto the Drones in Bay" folder and they will magically return to the drone bay. Or perhaps not so magically since they, of course, still have to travel back your ship.

Additionally you can drop drones onto groups to move them into that group.

It's worth noting that the drone rules have not changed at all. Like before, you can only have a limited amount of drones in space, and different types of drones cannot be grouped together.

While I was poking at that drone window, I fixed that incredibly annoying random collapse of the "Drones in Bay" and "Drones in Local space" folders so now you will not have to reopen those sections again and again.

Other minor changes you might notice in the drone window are that the group folders are a little bit more transparent than the main folders and the order of drones and groups has been changed. Now all groupless drones are first listed in alphabetical order, followed by drone groups in alphabetical order rather than having single drones in between groups.

A bigger change you might notice are Radial Menus on drones, but that is a topic for another blog :)

I wrote a forum post about these drone changes (among other things) and in the thread you pointed out the poor usability of sending your drones to assist someone. I'll admit it, I have never flown in a huge fleet with drone assist so I was a bit stunned to learn that people had to be pretty decent at the alphabet to find the person who they wanted to assist. Especially because most of the time there's only a small set of pilots, your watch list members, who are receiving the help.

So we decided to add a submenu, called "Watch List", to the Assist and Guard menus to give you an easy access to your watch list members. 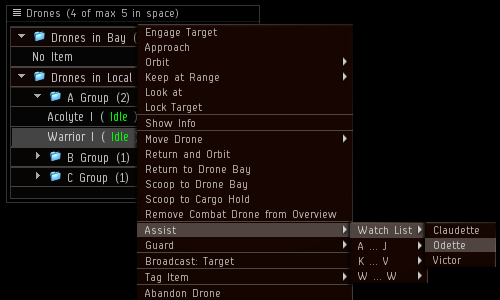 Anyone else tried more than 10 times to drag the skills from the Prerequisite tab of the Show Info window to the Training Queue or to link in chat? Admit it, you have! Or perhaps you, unlike me, are some sort of a normal person who learns from your experience and stops trying if something doesn't work. In any case, it only makes sense that you can drag the skills from there so we are making it so!

Shortly after I'd made that change, this happened in Help chat on Tranquility:

Elder Ozzian > CCP karkur a little thing: Could you make it possible to drag & drop skills (as links) from your character skill-set.
CCP karkur > Elder Ozzian i always forget that it doesn't work... but yes, that goes very well withanother change I was making
Elder Ozzian > Awesome!

And then it got done. Now you will finally be able to drag skills from your character sheet and skill queue to chat to link them for your friends to see.

I have often seen you guys suggest that bookmarks are not in the most sensible order but never really got what you were on about because their order always made sense to me, that is until Debir Achen asked if we could fix the folder order when creating/editing bookmarks and realized I had been looking at the wrong bookmark list. So in Odyssey 1.1, we are changing that nonsensical order to alphabetic order so now it will hopefully be easier for you guys to find the folder you want to save your bookmark in.

One of you recently said that if the Agent Finder had a way to find locator agents it would be perfect. Well, we do like perfect things, so we added a checkbox that will allow you to only show Locator Agents.

For a long time now, we have wanted to clean up the Attributes tab in the Show Info windows, as having the values listed under the attribute names makes for a very poor readability. We have finally done something about it and changed it so the attribute names are listed on the left, with the values aligned to the right hands side of the window. 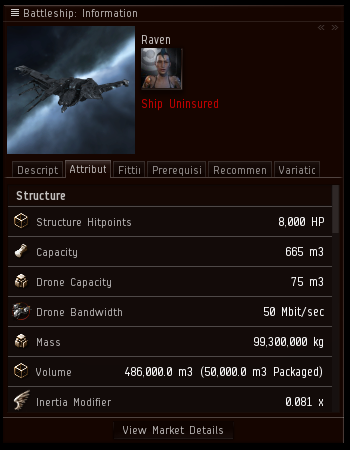 That's it for now, fly safe!