Livin' on a Prayer | EVE Online

Livin' on a Prayer

Whoa, we're half way there. You might be wondering why I'm spouting Bon Jovi lyrics. It's because much like Tommy who worked on the docks and Gina who worked in the diner all day, we at CCP are also half way there. Half way to bringing you Tyrannis, the next free expansion to EVE Online. I'm CCP Hammerhead, Lead Game Designer of EVE. Take my hand and we'll make it - I swear.

The Singularity Test Server should be updated with the latest in-development code by the time you read this. That means enterprising young hackers will be poring over the latest code and raw game data in an attempt to theorycraft the latest scoop about Tyrannis. Well in the spirit of transparency and in an effort to manage your expectations I'd like to tell you about the Planetary Interaction feature which is coming in Tyrannis and which you will be able to spot bits of if you really dig around on SISI (SISI is the test server's nickname). This is a no holds barred trip into where we're going and what you can get a tiny glimpse of and then watch evolve over the next months.

But before we get into that I would be remiss if I didn't give a modicum of back story. Interacting with planets is something we've always wanted to do. We have even shown a rough prototype of planetary flight at the first FanFest. Well, a lot has changed since that first FanFest but our desire to explore these thousands of worlds has remained unwavering. The EVE universe is such a rich and interesting place it's been a shame we haven't been able to immerse ourselves deeper into it. Until today where we are witnessing the first baby steps out of space and into the place where the rest of the inhabitants of the EVE universe live. Steps which will soon be followed all the way to the ground by a link into DUST 514 and inside stations with Incarna. Our final destination being an all encompassing sci-fi simulator where you can experience any sci-fi experience you desire. But I'm getting ahead of myself; we're here to sing 80s tunes and talk about Planetary Interaction.

A little about what Planetary Interaction is; PI is a feature in which industrial minded pilots can now take advantage of the resources on planets which had previously been laying dormant. To do that one simply opens the planet browser, finds a suitable planet via a scanning interface then plunks down various things we have internally been calling PINs (planetary interaction node), links those PINs together and then configures routes for all of the stuff moving between the PINs. PIN is just a working title and we've got our highly trained sci-fi experts on the task of renaming everything so you should expect the name to change by the time they reach Tranquility. Our ultimate goal being to create a nice additional revenue stream for people that's wrapped up in a sexy UI with lots of sci-fi feeling content that eventually ties in seamlessly with DUST 514.

So now let me go a little deeper into the feature and tell you about what is and isn't going to be visible on SISI. I'll take it from the high level and move deeper into the granularity as I feel that's the best way to wrap your head around the game mechanics. The first thing we had to do was come up with a method of distributing all of the resources to the various planets. We need to do this both globally and locally. By that I mean we need the resources distributed so there is a landscape to the regions including risk vs. reward balance of hi/med/lo sec space then that the individual planets also have resources spread across them in a way that looks natural when viewed from the planet viewing UI. This system for distributing resources is getting close to ready on the back end but no authoring or balance work has taken place yet. So on SISI the most you will could possibly get today is "1" of certain test resources. We're currently using our special development server dev hacks to put resources where we want them for testing and balancing on our local servers.

Once the resources are in place it would be nice to have some tools to find said resources. Well we're working on that too. The way one goes about this is to launch a satellite over the planet they are interested in, then pick a specific resource in the new planetary scanning window and get a graphical representation in the form of a heat map of how that resource is distributed on the planet. We use sexy colored spherical harmonics to represent hot spots for the best resources. The "scan planet" button currently only prints "mouseClicked" to the log so sorry you can't use it yet. You can Google image search for spherical harmonics to get a preview. Our version is so cutting edge it's only running on one computer in the whole world.

If your scanner worked or if you have fancy slash commands and GM menus you would be able to find a good spot to put down your Planetary Command Center. The PCC is your base of operations for all of your infrastructure on a given planet. Skills will likely allow you to have PCCs on multiple planets. After your PCC is down on a good location the next thing you want to do is start placing extractors in good locations based on your survey results. Extractor PINS pull the various resources from the planet be they solid, liquid or gas depending on which type of planet you're prospecting on. There isn't really anything to extract on SISI currently unless you're a dev but trust me, it's amazing.

When you've got an extractor and PCC placed you're going to want to do something with all those lovely resources and my recommendation to you is to add some storage PINS to hold your stuff while you're offline. Although you won't be able to move your stuff from the extractor to the storage without making some links. Links have (or will have) various levels of bandwidth. We've currently got only one test version and it's called Highway to the Danger Zone. Once everything is linked up your next task to use the route designer (GM only for now) to set the resource flows around you network of PINS.

By now you should have a network of PCC, extractor and storage PINS on your imaginary planet (because you've been doing this in your mind as you read the blog). You might be thinking it's time to get this stuff off the planet and onto the market BUT WAIT, THERE'S MORE! Why waste valuable storage space in your rocket or space elevator (more on that later) when you can do some processing dirt-side and just send up the good stuff? I thought the same thing. This is why we have process PINS. All kinds of process PINS for all kinds of processes which use all kinds of schematics (subject to change of course). You will be mixing and matching various resources and commodities based on those schematics to come up with intermediate commodities to eventually create final products. Some final products can be produced entirely on one planet but most will require transport to other planets to be produced. Nothing on SISI is currently balanced and you most likely won't be able to get this far without dev hacks anyway but this would be a boring story if I just stopped halfway through so let's continue.

Are you wondering about the Space Elevator I mentioned earlier? I am at this very moment. We call our first test version Stairway to Heaven. The Space Elevator is the best way to move things off of a planet. It is so good in fact that many planets won't even have them and we're not even sure if players will be able to build them in Tyrannis. Wars have been fought over access to these Space Elevators. I know because I've seen it. It isn't the only way to get rid of your stuff though. Each command center can launch cargo rockets on occasion and there is a space port PIN that acts as an upgrade from the command center. There is also trade hub PIN which lets you buy and sell commodities from your neighbors on the planet. With a trade hub and a trade agreement setup it's possible to create more complex networks that facilitate more advance process trees. THAT MEANS MORE FUN AND PROFIT! But of course you can't do that yet on SISI as it's technology from the future that hasn't been invented yet.

So I hope you will join me in impatiently waiting for May and the launch of Tyrannis. Check out SISI now for a first glimpse of PI but also be sure to check back in 3 weeks to see all of the progress that happens during a single sprint. I know you can't be here with me wandering around the office bugging everyone to work faster but I can assure you that's what I'm doing. Should I sing Power Ballads until Tyrannis is out the door? Sing with me; YOU LIVE FOR THE FIGHT WHEN IT'S ALL THAT YOU'VE GOT WHOOOOAH WE'RE HALF WAY THERE!

Big hair bonus round: As a treat for everyone who read all the way to the end of the blog we've decided to give you a special something. CCP Nimbus, one of our QA engineers on the Planetary Interaction team drew up some concept art for the basics of how the UI and functionality in PI works. What follows is the unedited results of his labor. We hope you enjoy it and that it helps you visualize the complex structure of the PI feature. 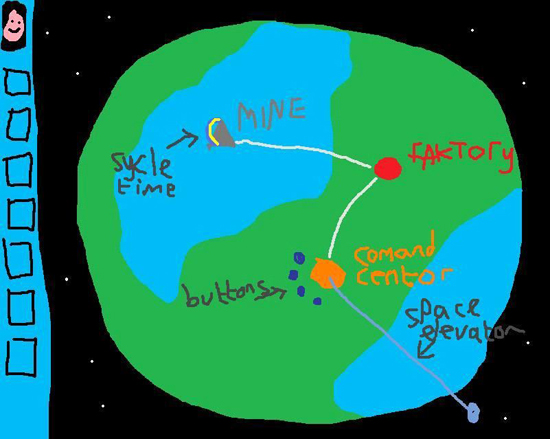 * Instructions for downloading the test client and logging into SiSi can be found on the Singularity page in EVElopedia.