Hello Capsuleers. I’m CCP SoniClover from Team Super Friends here to tell you some more about what the team’s been working on for Retribution. This blog is a follow up on the first one I did, which covered our work on a high level. I recommend you skim over that one if you haven’t already, as this blog assumes the reader has at least rudimentary knowledge of what’s going on. But I’ll quickly summarize what the team has been working on – we’ve been re-doing the broken bounty system so that now bounty is paid out proportionally based on the loss inflicted in a kill. We’ve refactored the kill right system so that players can now get others to help in exacting revenge on their former assailants. We’re also continuing to iterate on the war system and adding and adjusting a few modules.

The team has used the time since the last dev blog to implement, refine and polish the features, taking into account feedback from various sources – the CSM, the forums, test servers and so on. This feedback has resulted in us making some adjustments to our work and priorities and will be discussed in more details below.

On the whole, we’re on track to deliver what we set out to deliver. A few items have fallen of the to-do-list, but there are a few new ones on it instead. We aim to continue working on these features post-Retribution, so expect further iteration down the road. We’ll keep you posted on the details here as the time comes.

So without further ado, let’s look at some of the stuff we’ve been doing.

In addition to the Most Wanted List, we’ve added a Bounty Hunter List to the Bounty Office. This lists the characters with the highest total bounties claimed in ISK, as well as the number of kill reports they’ve been on where a bounty was claimed. There is separate list for corporations and alliances, though those do not list number of kills. 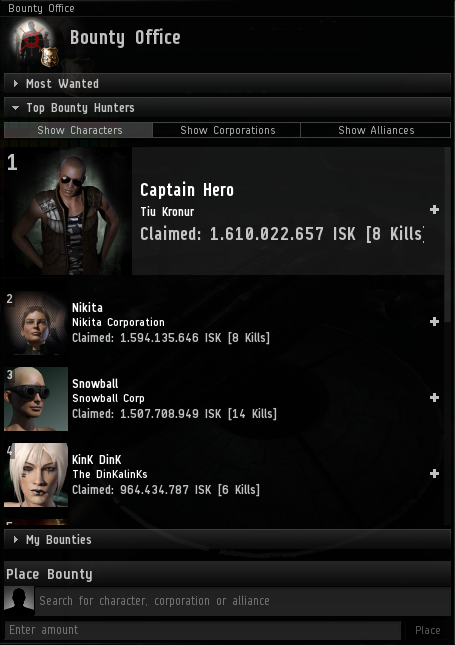 There is also a tab where you can track all bounties you’ve placed (My Bounties).

When you have a bounty placed on you, the notification you get sent now also includes the name of the character that placed the bounty on you.

We’ve reduced the minimum amounts for placing a bounty on corporations and alliances, from 50 million and 500 million to 20 million and 100 million respectively.

It will not be possible to place bounties on NPC characters (like agents) or corporations (but you can place a bounty on a player character in a NPC corporation), nor on CCP developers or ISD people.

A final note on bounties, there have been a few misconceptions floating around regarding them that we want to clear up/restate: 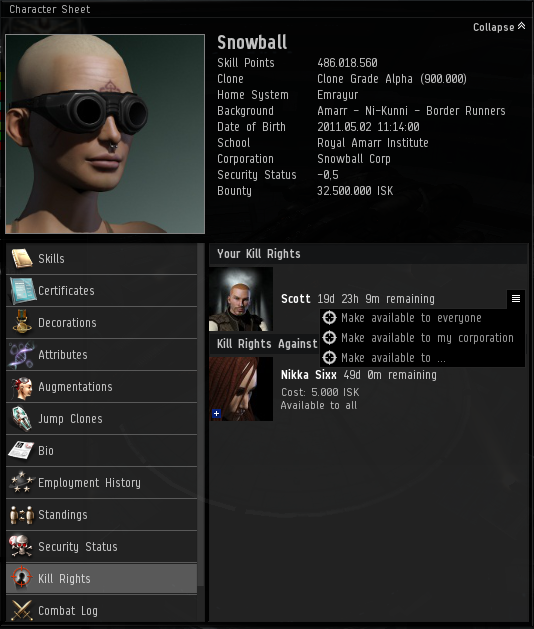 You can also revert your choices here and cancel the availability of your kill rights, using the same menu. Currently there are no restrictions on how fast or frequently you can cancel kill right availability or make them available again.

To be able to spot better those you have kill rights available on, we’ve added a new icon to the overview and the chat channel. You can set these to show those in your vicinity (overview) or system (local chat channel) that you can activate kill rights on. Note that there is also a bounty icon already in existence that is now more viable to show than before.

The Suspect flag means that anyone in the vicinity can now attack the flagged player. Running through the scenarios of what this entails make this less of an issue than at first glance.

The Rules of War

We’ve done two iteration stories on the war system from the Inferno expansion. These are the stories we got to this time around, but there is more work to be done here.

The aggressor now has the option to retract a war that has been made mutual by the defender. This ends the war in 24 hours. The other option here was to give the aggressor a chance to accept or refuse making the war mutual, but we felt the retraction was a cleaner and simpler solution.

The other story is a bit of refactoring of the war declaration cost. We’ve removed the cost multiplier based on number of wars you’re in, as this was causing issues when wars are being copied around, plus it’s much more severe to be multiplying the base cost now compared to before (50 million and 2 million respectively).

Tools of the Trade

Here’s some more information on the two new modules we’re making for Retribution.

For the Micro Jump Drive, we will start by just doing a large version of this module (Large Micro Jump Drive), which only battleship size ships can fit (Battleships, Marauders and Black Ops). Here are a few pertinent points:

For the salvage drone, we will start with only a tech I version.

One final note is that we’re also making a small adjustment to the Noctis. We’re giving it a drone bay of 25m³. Initially, this was limited to salvage drones only, but we decided to remove that restriction, so you can now put any drone type in there.

Quick note, the drone damage amplifiers are also being adjusted (their damage bonus is increased), but this is the work of Team Game of Drones, so I’ll only mention it in passing here. Also, Team Five-0 is also adding meta-variations of the drone damage amplifiers (and other drone modules). Check out the Game of Drones dev blog here and here for more info.

That’s it for Team Super Friends. We hope you enjoy what is coming and have a happy Retribution.