tl;dr Lots of exciting things are happening, including some changes to the way standings work for players. The most important bits are bolded, so scroll down and have a look-see.

Hi everyone, my name is Greyscale, and I'll be your systems designer for various upcoming client changes related to the next EVE release, and tying into the new EVE Gate social network site. Today I'm going to give you an overview of what we've got coming up, how it's going to affect you, and dive into a few changes we're considering for existing systems.

I'm not a web specialist, so I'm going to stick mainly to client-side changes, and let the interweb dudes explain their shenanigans in a later blog. In general though, we're following a mandate to ensure that functionality is comparable in the client and on the web. Pretty much everything I'm describing here will therefore be available in your browser too.

We've got two teams handling the feature work on this project - Team Stonehenge and Team Yggdrasill. Each team is responsible for a particular key feature, and contains a mix of client, server and web programmers, to ensure we can deliver on the web and ingame simultaneously. Both teams have their own QA resources, and a shared design team ensures that everything matches up at both ends.

Anyway, without further goodbye, here's what the teams are working on. 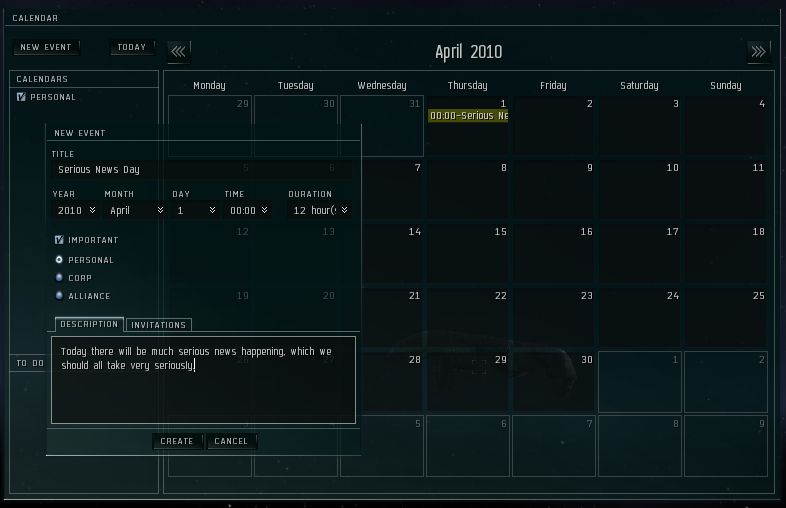 Yes, we're adding a calendar. The above image represents about half a sprint's work, so it's essentially an early visual prototype and in no way even approaching "done". Expect it to be approximately eight times more awesome by release.

For now we're only planning on having a "month" view; we think the majority of players are unlikely to have more than two or three events per day, and the fact that we're a 23/7 game means trying to show "day" and "week" present some visual hurdles. Events can be created for yourself, or for whole/corps alliances (restricted by roles), and we're also planning on having a "CCP" category for occasional official use, and on allowing you to invite other players to personal events. The filters on the left will allow you to toggle all events in a given category on and off, and there will also be an "upcoming events" box in that area (and perhaps in other places such as character selection).

Our initial target has a fairly concise feature set, to give us more room to polish the product. EVE Gate will be an ongoing project, and improvements there should in most places be replicated in the client too.

Here is another work-in-progress half-a-sprint UI prototype of the new contacts section of P&P: 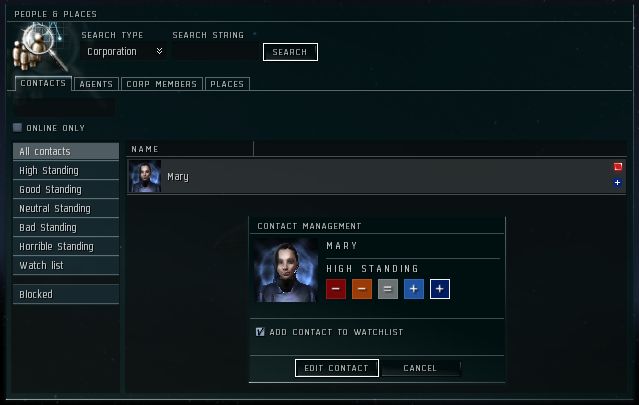 This window is the frontend for contacts management in the next expansion. It merges the functionality of the address book and the personal standings list, and adds a few cherries on top. Things that you will likely notice:

·         A lot of the words may seem out of place - this is because they're not final yet! We're still deciding on final terminology.

This last thing is probably what you noticed first, and it's worth repeating in a more obvious way, I think: there will only be five levels of standings in the new system.

Currently there are ~200 settings you can choose, which in the vast majority of cases is overkill. Indeed, in the majority of cases there are only five states that you care about: dark blue plus, light blue plus, nothing, orange minus, red minus. These five correspond to the five options you see here, in a fairly obvious way.

There are three situations we've located where this represents an in-practice reduction of functionality:

·         Diplomatic book-keeping. For entities managing large numbers of standings with a wide range of nuanced diplomatic states, the old system was useful in ensuring that everyone knows exactly what the relationship with a given entity is. With this new system, we feel that the advantages of a simpler system outweigh any disadvantages in this respect - and we're pretty confident that our players are more than smart enough to find their own alternate solutions here.

·         Starbase forcefield access. The reduction of granularity here degrades the functionality somewhat, but we're hoping that it won't cause widespread issues. Nobody here at CCP will deny that, as with several other aspects of starbases, this whole area of functionality could do with an overhaul, but that is unfortunately out of scope for this release.

·         Player-owned station charges. The current system uses a fairly arcane formula for calculating various pricing options, the most significant of which we think is the refine tax rate. Again there's some degradation of some functionality here - assuming you're only letting friendlies dock, you're essentially limited to two settings now, which may be slightly restrictive for some alliances.

We're anticipating a range of player opinions on these issues, which is why we're discussing this so early in the development cycle. We'll be paying attention to the feedback thread, and taking any well-reasoned arguments into account going forward. Also, see the final paragraph of this blog for bonus info on these systems.

Other things you should know:

On that subject, there are two other changes we're considering that we'd appreciate feedback on.

Firstly, the way standings are calculated for color tags in the overview and so on. Currently the code goes down the list of tags, checks if a pilot (or whatever) meets the criteria for each in turn, and as soon as it finds a match it uses that tag. When it comes to standings, it checks to see if any standings (personal, corp or alliance) that apply meet the criteria. This means that, in the default setup with the blues first, it's essentially "highest standing counts". (If you flip the tag ordering, you can force it to do "lowest standing counts" instead, I believe.)

The change we'd like to make here, at least as far as it relates to in-space tags, is to make alliance standings override corp standings, and corp standings override personal standings. (It would go alliance-alliance, alliance-corp, alliance-personal, corp-alliance and so on.) This means that you can have friendly personal relationships with people in enemy alliances (which is relevant to EVE Gate functionality), but have them still show up red in space.

Secondly, corporate membership lists (for player corps). Currently you can see this in two places: in your P&P, and in the corp interface. We'd like to remove it from P&P, because it doesn't really belong there, and we've been discussing adding it to the corp's "show info" instead. The question then is whether the corp member list should be globally viewable, or just viewable to corporate members. This becomes more complicated when you add EVE Gate to the picture, because if you have the same publically viewable information there as in show info, it's considerably easier to build a corp membership database by simply pulling all the pages and associating names with corporations. The info is obviously already available through the client in principle, but compiling it is a non-trivial exercise; a web version simplifies it considerably. Opinion is still divided here on whether this is a serious issue or not.

We welcome feedback on both these issues!

Some other cool things

In making these changes, we're probably going to have to make some changes to corporate and alliance standings management. We can't make any promises about the eventual functionality, but at the very least it's unlikely that we'll discover a way to make these windows any harder to use...

There's also a little story I'd like to tell about Alliances. See... Alliances don't really exist - not in the same way that corporations exist, anyway. That's why, for example, there's no such thing as "alliance roles" - the thing that you attach corp roles to doesn't exist for Alliances (at least, this is what I understand when the programmers try to explain it to me). It's also at least part of the reason why Alliance "standings" are currently a bit... odd.

For those of you who've never poked around in the politics tab of an Alliance, you "set standings" by selecting options for what are essentially +10, +5, -5 and -10 from a dropdown. It works, but in a bit of a non-standard way - which is why you can't use alliance standings for useful things like configuring outposts, or stopping your starbases from arbitrarily deciding to kill all your friends.

Well, in the process of implementing the new standings system, it has been determined that it's easier to rewrite Alliance standings than make the old system play nice with the new Contacts system. As a convenient side-effect of this, Alliance standings will now be used whenever stations or starbases make a standings check. This, we hope, should make managing these things much easier in most scenarios.