The four price indices of New Eden have been calculated for November 2011.  My apologies for failing to deliver the index blog for October.  For more detail on the indices, please refer to the Market Indices page on Evelopedia.

Prices of PI made products rise considerably in November and started doing so mid October, with another spike at the end of November.  The first spike coincides with a blog announcing player-owned customs offices and changes to import and export tax, while the other spike happens at the launch of Crucible.  Despite increased capacity of planetary links, these changes are bound to lead to higher production costs, which might in turn affect supply to some degree, at least in the short run.  The development of these prices should prove interesting to watch in the coming months.

The last price index blog mentioned a suicide ganking initiative undertaken by the Goons, aimed at reducing the supply of ice mined in Gallente high security space.  The average price of Blue Ice rose by 152% from September to November, while the price of Oxygen Isotopes rose by 124% in the same period.  The initial effect on traded volume was quite different, as Blue Ice quantity dropped by a whopping 80% from September to October while Oxygen Isotopes only fell by 22%.  Although high-sec suppliers of Blue Ice were largely driven out for the time being, Oxygen Isotopes were still being supplied from outside of high security space.  However, traded volume of Oxygen Isotopes fell by a further 46% from October to November, probably due to reduced demand as more starbase operators lost patience with the high prices and switched to starbase types that require different fuel. 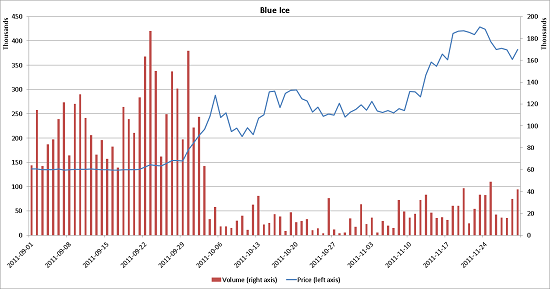 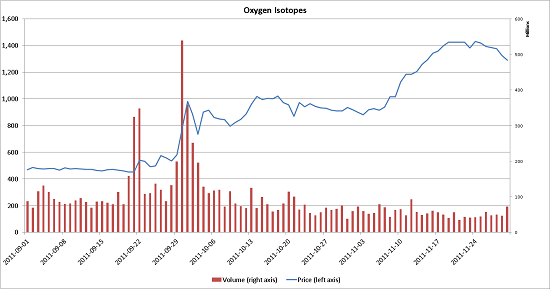 PLEX prices rise by 13% from October to November, having risen by 7.9% the month before.  At its peak on November 15, the daily average reached 498 million ISK, which is an all-time high.  The spike may have been driven by speculation, with the rising price convincing more and more people to keep their stock or add to it.  In the end, the Crucible expansion burst the bubble as many sought to fund their purchases of  newly introduced items through PLEX sales, thus significantly increasing PLEX supply.  This dropped the price by 10% from November 28 to December 1. 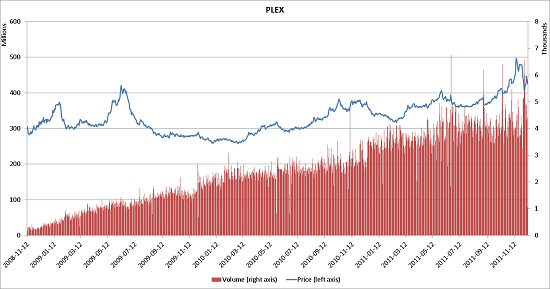 The index values for November are: 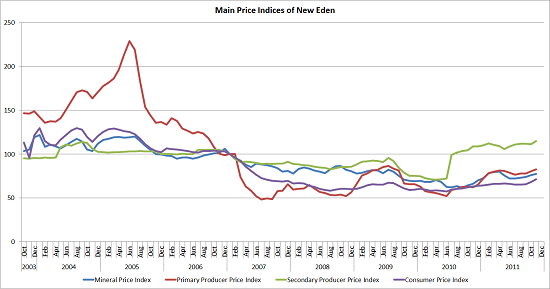