Something wiki this way comes

What is EVE Online?  Bums, Education drop outs, Marketing, Scholars have argued this question for many years and come up with such answers as: “EVE is an MMORPG” (you can just taste the scholarship at work there) or “EVE is REAL” or “EVE is ruining my god damn life and my girlfriend is about to leave me but I got a sweet kill last night in my HAC."

In any case, EVE is this huge, hard-to-define entity that is pretty bloody cool, “somewhat” complex and so deep you can easily lose yourself within it.  Players like to write about EVE, whether it be a guide to the latest really complex lovingly crafted system, whose face their alliance just grinded into the dirt, or a guide to that mission or complex they just completed.

So some bright spark at CCP decided that it would be cool to have a central repository where people could put all of this stuff and others could easily locate it.  Someone said wiki’s were cool, so the EVElopedia was conceived and brought to life.  It had a bit of an unsteady birth; issues with moderation and various other things initially hampered its growth, but it has since steadily grown in popularity and use.

What is the wiki

So the EVElopedia is a wiki.   Put simply: it allows users to create simple Web pages on whatever they like and other users to search and locate that information.   For the EVElopedia, this means any and all information related to EVE.  For example:

But it says beta?

It’s a bit ugly though.  It’s also still in beta.  It also has some lingering annoyances.  So we decided it was high time we kicked it up the arse so we have the release version coming out very soon™.   Unfortunately for me and wanting to show off in this blog, we mainly fixed a ton of boring behind-the-scenes work that was getting in the way of us progressing the EVElopedia along with the players like we wanted to.  But here’s what we did change that you will notice: 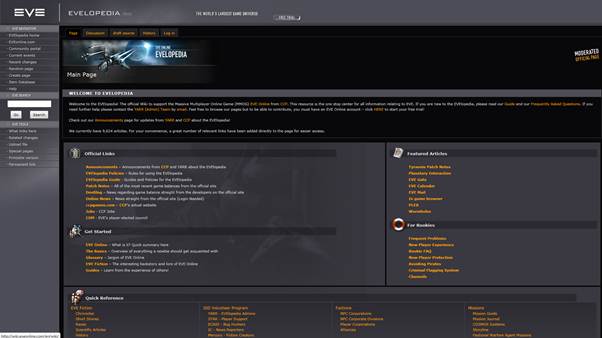 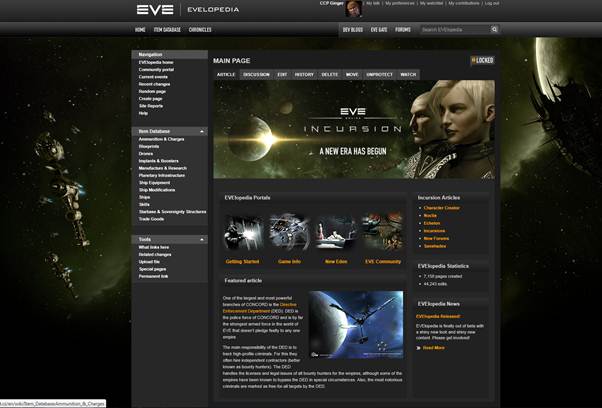 We removed the moderation queue

We had a system where you would edit a page and then it would go into an internal queue where our volunteers would check the edits and then approve the changes made to a page.  While our vols did a great job, it really wasn’t the best idea.  So we tried a few things and decided to go with the best suggestion: remove it.  So we removed it.

We still have a very few pages that we will simply just lock. 99.9% of the pages on the EVElopedia you can edit at will.  I know what some of you are thinking!  Don’t do it, we will ban you.  We will still be looking over all the submissions and anything that breaches the rules will get you spanked and possibly banned depending on how naughty you were.  The rules aren’t that complex, but basically boil down to “don’t be a wanker.”

We fixed our backend

So many potential bad jokes. Anyway, this took ages and is boring, but during the initial development cycle and birth of the EVElopedia we did some things right and some things not-so-right.  So we took a long look at it, chucked out a lot of stuff that was getting in the way of enabling players to contribute, and added a lot more support that allows us to easily add player requests, for example new extensions.   We put in support for localization (not everyone likes English, you know) and laid the groundwork for better links from in-game to EVElopedia.   EVElopedia is now much more closely aligned with its mediawiki core, which basically means we can move faster and operate better, allowing us to bring player requests and suggestions onboard to expand and improve EVElopedia.

We are implementing a portal system to make it easier to navigate around various subjects, something we were really lacking before.  Hunting for something specific is fine, but trying to find all the help you can on mining or PvP can be laborious.  We’ve started the portal system in this release and hopefully the some of you will come on board and help us expand it post release.

There are a lot of good EVE Online wikis already out there.  We want to work with these to both projects advantage.  To that end we are working in partnership with EVE University and EVE History wikis to port over some of their best articles onto the EVElopedia, which we will then link directly back to the original.  Also once we have implemented the in-game help links, your site's guide might be linked directly from the in-game window related to it.  Which is pretty cool, IMO.

I’m thinking most of you will just want somewhere you can go search for a guide on advanced mining techniques, how to be a space ninja, or who are the Goonswarm – I like you people.   A lot of you however will want to make new articles or update old ones – I hold you people close to my heart.  Some stalwart souls will even want to really get involved and help us develop and progress the EVElopedia – you are my special people.

If you want to help further, how do you do it?  We have a volunteer team (named YARR, much to their modest delight) who help us develop, support and moderate the EVElopedia.  These guys liaise with you and then talk to us about what you need and require and then we get that implemented (new extension, hate the font size, etc).  They happen to be recruiting!

If that’s not your cup of tea and you just want to see what people need help with or contribute to on-going projects then the Community Portal is the first stop shop as well as a hub for the community on the wiki.  We currently share a forum which our volunteer EVElopedia admins and CCP watch, and you can email YARR at evelopedia@isd.eve-online.com.

Or you can simply create a new article on your favorite subject.  However, please be sure that you search for the topic first, as chances are someone else has already made something and you can go and improve that instead.

So that’s whats going to happen; this is what we want to happen in the not so distant future...

The current, basic wiki editor is rather awful, and we’d like to get something WYSIWYG-like in place to allow more people to easily create and update articles.  This is sensible, we are sensible.

This was actually going to make it in for the summer, but my heart was broken and it got delayed.  Basically, we want to turn the help button you have on windows to directly go to an appropriate EVElopedia help article.  This seems sensible; our current help doesn’t.

We might already have this in place by release.  But we like more languages.  More languages are sensible.

We're hard at work on the first part of the Immersion Project, a central storehouse of all our lore so far. It's up to nearly a thousand articles, and it won't be long before we can let you guys get your first look at it.

So what does all this resolve into.  A leaner, easier to use, more pretty EVElopedia.  Its my fervent hope that the community will get even more involved with the EVElopedia and we will see all manner of beautiful and crazy articles appear.