“glitter is the herpes of craft supplies”

Demetri Martin, because everyone else is using quotes.

As we enter our sixth sprint, titled Superion, team "T3ch" is still working relentlessly towards its goals. Having accomplished a lot in previous sprints (named Magnaboss, Voltron, Zeta Gundam, and Devastator) things are going smoothly. For many of us, this is our first time working within a scrum team and the operation has been very successful so far.

Team "T3ch" consists of Tuxford and 2Kay from software, Lemur and Dionysus assuring quality, Chiliad, our “Product Owner”, finally Chronotis and I heading up the designs. As can be gleaned from the team name, our primary task is introducing Tech 3 but we're also working on a new and improved fitting screen, mechanics that allow you to save and share your setups and of course, the eternal task of general improvements and bugfixing. In this blog you’ll get a short summary of the dark delights of Tech 3 ships

The elation of happening upon a unique fit, some fresh and clever setup, has always been a very appealing aspect of EVE. One of our primary goals for the Tech 3 ships was to bring this customization to a whole new level. The new ships are a fundamental departure from the tried and tested, offering such unparalleled customization that discussing them on the same terms as previous ships belies their true extent - we're talking full-fledged, independent systems within the system. A little bit scary, really. They are called Strategic Cruisers, where "strategic" refers to the internal scalability and dynamic nature of the setup options- not a battlefield role like coordinators or command ships. Of course, they can align beautifully with virtually any fleet on any mission, but just as well prowl as lone wolves. 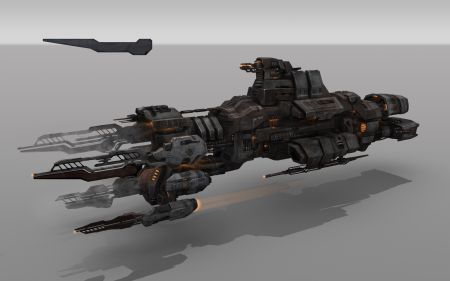 To assemble a Strategic Cruiser you need a hull (the base ship chassis) and 5 subsystems:

Defensive Subsystem - Determines the general "toughness" of the ship, how much damage it is capable of taking or how hard its outer shell is. It will also scale the cargohold and dronebay.

Offensive Subsystem - Will be able to modify hardpoints, launcher slots, give different damage bonuses as well as control the drone bandwidth.

Subsystems not only change the ship's attributes, slot layout and bonuses, but the geometrical shape and appearance as well. As stated, each vessel consists of 5 subsystems and a hull. Once the ship has been assembled, players are free to switch out the subsystems completely at will, given they are docked at a station. Each subsystem category has multiple possible variations. Within a single category the available variations do not go from worst to best according to expenditure, but instead have their complimentary strengths and weaknesses. This way, every single subsystem combination will be allowed, whereas with a "bigger is better" approach we'd have had to restrict certain combinations, lest the most expensive combination render all the others moot.

Now, if we just take a moment to consider that every subsystem configuration is available on each of the four different ships, what we end up with is a total number of variations reaching into the literal thousands - and that's before you fit it. This might almost seem daunting, but hopefully careful implementation and a lucid interface will ease you into the spiraling complexities of this whole new ship breed.

The Tech 3 entry level will be very similar to the Tech 2 one, only requiring fairly basic skills to pilot. Of course, additional skills will be required to fully utilize the different subsystems.

Each race will have a set of 5 subsystem skills as well as a ship skill. The subsystem skills have very basic requirements and are only "rank 1". These affect the subsystem bonuses. Don't think we decided to have them rank 1 just to be cordial though; they don't function like other skills when it comes to ship loss. This is important: Due to the sudden rift in the symbiotic ship relationship that exists between a pilot and a Tech 3 ship, losing a Tech 3 ship will result in a random skillpoint loss from one of the racial subsystem skills. The penalty is one level off the top. Observe that whether that is a downgrade from, say, level 2 to 1 on your underdeveloped electronics or a painful fall from level 5 to 4 on the spit-polished offensive subsystem, is entirely dependent upon lady luck. Ejecting or self-destructing does prevent the penalty, giving players an incentive to abandon ship from time to time.

The initial struggle of birthing behind us, we've finally come to the point where we can begin balancing the subsystems. Joining me for these emotional first steps is a familiar face to many of you, the one and only TomB.

In the grand scheme of things we want Tech 3 ships to take a much broader role than any other ship class. Whereas Tech 2 ships are highly focused, Tech 3 ships will fulfill multiple roles through customization and versatility.

Seeing as how every variation of all 5 subsystems has to be carefully granted advantages and disadvantages with due consideration to how it combines with all the others(sigh...), a long and arduous balancing act lies ahead. Player scrutiny and feedback will be a great asset to us while balancing the Legion, Proteus, Tengu and Loki (the four Tech 3 ship classes). We hope that most of you will assist in bringing about the monumental leap to the next generation.

Chronotis will enlighten you about Tech 3 production in his upcoming blog, Tuxford or 2kay will undoubtedly want to inform you all about the mechanics that lurk behind the scenes. As we're going to be relying much upon player feedback, you can expect seeing the Strategic Cruisers on Singularity soon. All I can say now is, welcome to the wonderful world of interstellar Lego.