Welcome to another blog on the upcoming Citadel expansion by Team Game of Drones. It’s been a while since we last discussed the Citadel feature and we felt some update was sorely needed. So come on in, make yourself comfortable and enjoy the show. Just stay clear of that mushroom-shaped house in the corner, that’s where CCP Guard lives. 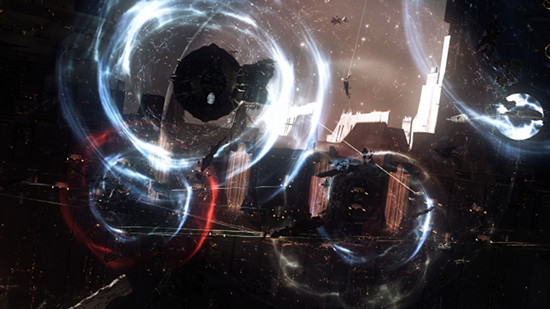 The above picture shows our latest mass test involving a player fleet fight around the largest Citadel, the Keepstar. Model is work in progress. Picture courtesy from Lord_Maldoror. 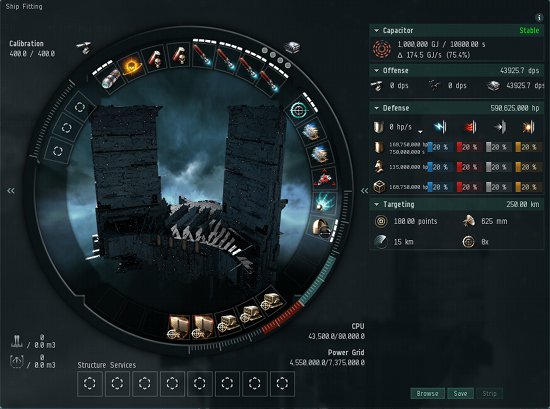 Fitting of the Keepstar during one of our internal playtests.

Let’s recap what we have already talked about regarding fittings in case you haven’t followed progress closely  since Fanfest 2015.

Unlike existing Starbases (also known as Player Owner Starbases or POSess), the new Citadels will not rely on deploying multiple structures to add more functionality to your little space castle. They will use a fitting system in a way almost identical to ships, with slots and modules to achieve customization gameplay.

These slots are sorted into different categories:

In the same fashion that a Caldari Raven battleship doesn’t have the same role than a Scorpion, not all structures are going to be alike. Structures will focus on different themes, each having specific strengths and weaknesses. Citadels focus on defense, logistics, and office capabilities, which make them naturally good as staging points. Other structures we will introduce with time will tackle other fields like industry, resource harvesting, propaganda, intelligence or even long distance movement.

What that means in practice is that, while most of the various structure rigs and modules that are going to be available can be fitted into any type of hull, some will be better suited than others at a specific task. For instance, while a Fortizar (large Citadel) could be fitted with manufacturing service module and rigs, it will not offer as good Material Efficiency and Time Efficiency rates as a dedicated Assembly Array structure fitted on the same fashion.

This specialization will be achieved through the use of specific bonuses available on each of the new hulls.

For Citadels, these will be:

Unlike ships, these bonuses are fixed and not dependent on character skill level. In fact, no existing skill will affect any of the structure hulls, modules or rigs. That means Engineering will not increase powergrid on any of the new Citadels for instance, and that none of the missile support skills will function for the structure missile launchers.

This decision was made on purpose to:

We are still going to require a few skills to operate the structures and give few bonuses, but their effects will be limited for the reasons mentioned above.

All of these skills have rank 2, train with Charisma and Willpower, and have very low skill requirements.

Please note the Starbase Defense Management skill will stay untouched until we remove Starbases, at which point it will either be repurposed or reimbursed.

Since the Citadels have slots, they rely on standard ship fittings like powergrid, CPU, or even calibration to install modules.

Details are listed below: 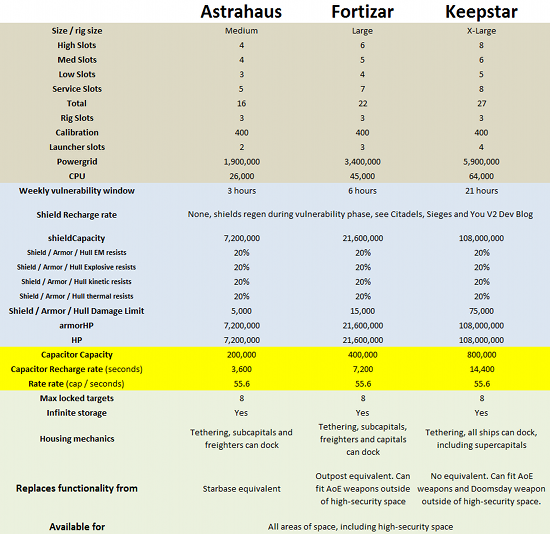 We have listed most of the structure modules and rigs that will be shipped in the first release in the “Building your Citadel, one block at a time” blog. Now is the time to give you more details on what those modules actually do.

As usual, please note all names and numbers are subject to change based on time and playtests.

As a side-note, the various missiles shot from the structure launchers will either have high hitpoints or be invulnerable to attack to minimize firewall tactics. This will be decided during playtests. We are also going to increase all capital ship signature radius to at least 10km to account for the structure missiles listed above.

Another difference is that structure rig bonuses will vary based on the solar system security-status of the structure they’re in. As such, low-security, null-security and wormhole spaces will always receive better rig bonuses compared to high-security structures. This is made to preserve the various changes in gameplay in those different areas.

Finally, rigs of different sizes will offer the same bonuses, but will cover more or less attributes. For instance, while a Medium Missile Application I rig would offer 10% increase missile explosion velocity, the Large Missile Application and Projection I rig will still give a 10% increase to missile explosion velocity while also increasing missile velocity by 10% at the same time.

There may be exceptions to this – for instance the reprocessing rigs below do not follow this pattern as we want to preserve existing reprocessing differences between structure types.

Unlike existing Starbases, new structures will only require fuel when service modules are online.

The fuel cost is split up in two:

Since fuel costs are tied to individual service modules, it will be possible to consume more than existing Large Control Towers, or less than Small Control Towers depending on which activities are available. Below is a list of the four service modules we intend to ship with the Citadels and their associated fuel costs.

We initially announced a new fuel block type that would be produced from all racial isotopes, but after much internal debate we’ve come up to the conclusion this creates a certain number of issues, one of which being too much hassle to import all the materials around.

As such we are going to allow the four existing fuel blocks to work with the Citadels for greater flexibility. Since Citadels don’t use Strontium Clathrates for their reinforcement mode, we will add this particular material into the composition of the four existing fuel blocks to maintain its demand. The current number we have in mind is 400 units of Strontium Clathrates for a batch of 40 fuel blocks.

As a side note, we are not going to require the use of the infamous Starbase Charters in high-security space as we feel it is an overkill requirement.

As usual please remember all the above numbers are still works in progress! Expect changes in the future based on feedback and iteration. We are planning to release the new structure skills and change the existing structure components as mentioned in the last Blog in March to give you guys some time to adjust before we release Citadels. We are also planning external playtests on our test servers, so keep your eyes peeled for updates.