Time flies - it has almost been one year already since our first Dev Blog on the rebalancing initiative, and much has happened since then. The balancing team, extended with the addition of CCP Fozzie, the machine sent from the future to kill Sarah Connor, and soon to be joined by someone else you guys know about, has so far tackled tech 1 Frigates, Destroyers and Cruisers. With Battlecruiser changes planned for Retribution 1.1 time has come to purge the ship skill requirements with fire as we promised a while back.

Since the changes have far-reaching consequences, this blog will go into as much detail as possible to make sure everyone understands exactly why, how and when this is happening. So, take your time reading it and don’t hesitate to spread the news; copy then paste it in your corporation forums. Discuss it in-game, or on your favorite social communication tool. Print it in your local newspaper and announce the apocalypse is coming. You can even tell your mom about it.

In A Land Far Far Away

Before we take the red pill and go down the rabbit hole, let’s explain why we are overhauling a system that seemingly works fine. 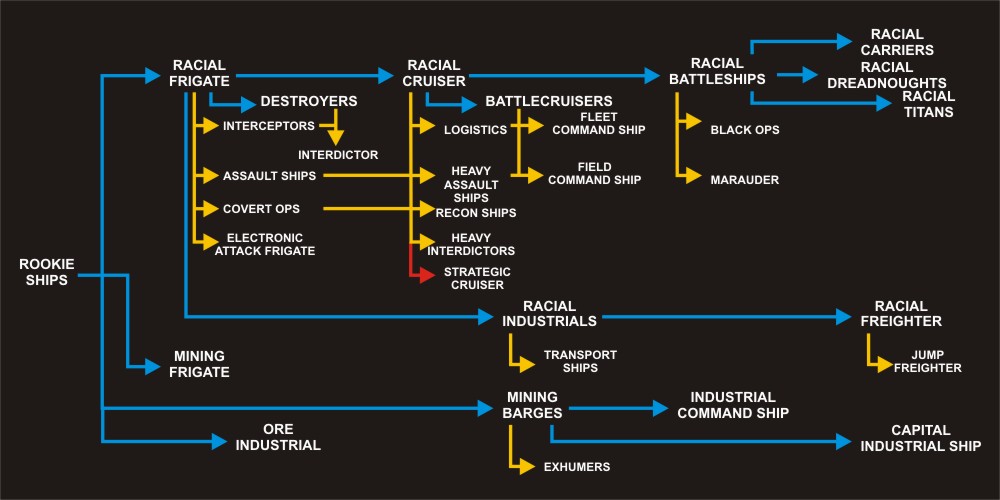 Above is a simplified view of the current EVE Online ship progression tree for one Empire Race (we will use Amarr as an example here) plus mining ships most often associated with the ORE (Outer Ring Excavations) corporation. There are several things we do not like about this tree.

This problem is amplified on the tech 2 level. To fly a Damnation (and without counting the other requirements), one not only needs Battlecruisers at 5, but Amarr Cruiser at 5. This issue exists in the first place because Destroyers and Battlecruisers ship classes were added after the original release in the Exodus expansion, and had to be integrated in a way not to disrupt training at that time. The multiplication of ship hulls since then no longer makes it a viable option to maintain.

Another point we are not fond of is the over-redundant training needed for specialization. Still looking at the tree above, some tech 2 ships require sets of skills that are not relevant to the hull you are specializing into. Notorious example is the Absolution, the Amarr Field Command Ship, with forces training of Heavy Assault Ships, itself demanding Assault Ships to be learned. While we are fine with time sinks, they should be related to the field you are specializing into and not push you into hulls you are not interested in.

Less apparent on the tree above, there also is a lack of transparency on specialized modules tied to a given ship niche. Let’s take the Heretic, for instance. Among other things, it requires the training of Interdictors 1, Destroyers 5 and Amarr Frigate 5, for a total training time that approximates 40 days – (without counting any support skill). It seems alright for a ship of this size and role. However, the trap lies that 30 more days are required to use an Interdiction Sphere Launcher. Of course, a smart player should notice the module from the ship description and react accordingly, but the point remains that the training time on the show info is misleading.

At the end of the road

So, where does that bring us? To the revamped tree below that we want to achieve Summer 2013. This will require some significant modifications on training requirements. 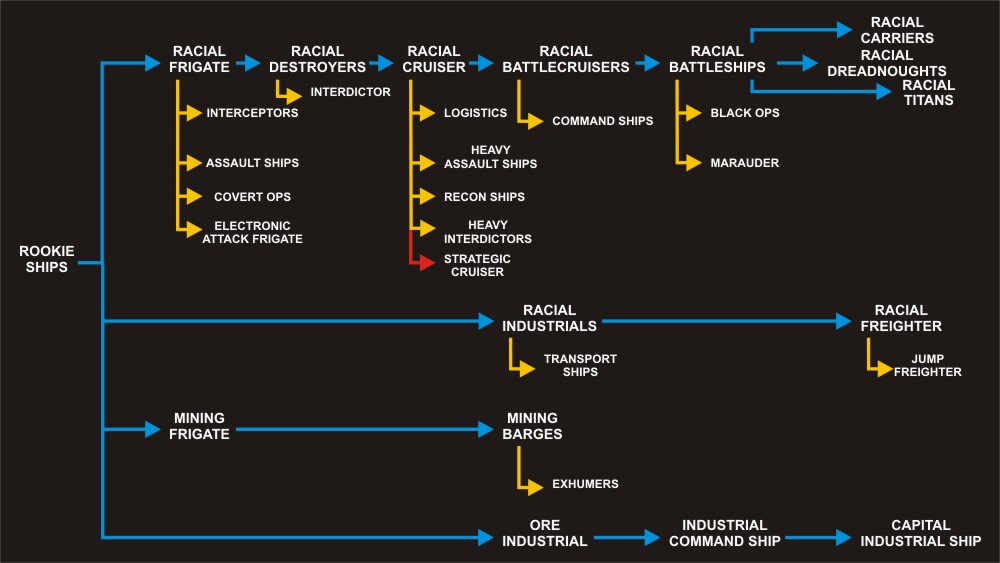 The new racial Destroyer and Battlecruiser skills will be set as requirements to train larger ship classes. To compensate for the extra training steps, all prerequisites to hop into the next, larger tech 1 hull will be reduced from 4 to 3. To train Amarr Battleship at level1 right now, one has to train Amarr Frigate and Cruiser to 4, plus a few levels in Spaceship Command. After the change the same person will need to train Amarr Frigate 3, Amarr Destroyer 3, Amarr Cruiser 3 and Amarr Battlecruiser 3 (plus a few levels in Spaceship Command, still) before being able to reach Amarr Battleships.

On the same vein as above, requirements to train capital hulls will only require battleship 3 instead of 5. Simply put, aiming for tech 1 hulls should not require training the previous class skill to 5, which is specialization, thus dedicated to tech 2 vessels. We are changing skill requirements to keep a training time close to what we have in game right now and to make sure players meet more relevant prerequisites when gearing for Capital Ships. This also means it will be easier for Capital pilots to cross-train to other races which we believe to be a good point.

Ship skill training has been further adjusted when necessary to include specialized module requirements. This is the case for Interdictors, Heavy Interdictors and Command Ships in particular. This also applies to Capital Ships, as you will see from the skill changes with Dreadnoughts, Carriers, Suppercarriers and Titans.

The ORE branch (Venture, Noctis, Orca, Rorqual plus all mining barge variations) has been tweaked to a consistent progression. For instance, the Rorqual will not need Mining Barges 5 to be flown anymore, but will instead require the Industrial Command Ship skill at 3, itself requiring ORE Industrial at 3.

What are the impacts of all of this?

Skill changes under the microscope

Except for the Navy Battleships, Destroyers and Battlecruisers (whose reimbursement is detailed in the next part) all the affected ships will still be flyable even after the change with no fancy reimbursement, provided you can fly them on Tranquility right now. This works because once a particular skill is trained, the system doesn’t care about sub-requirements anymore. Theoretical and unlikely example: you have Amarr Battleship 1 and Amarr Cruiser 3 currently trained. You are pod-killed without having a proper clone, and Amarr Cruiser 3 is reduced to 2. You will still be able to fly the Armageddon, as long as Amarr Battleship 1 is retained.

To clearly illustrate the changes, we will be using two characters (with minimal skills and 20 in all attributes, except for Charisma at 19, no implants) to compare how training time is affected in game. 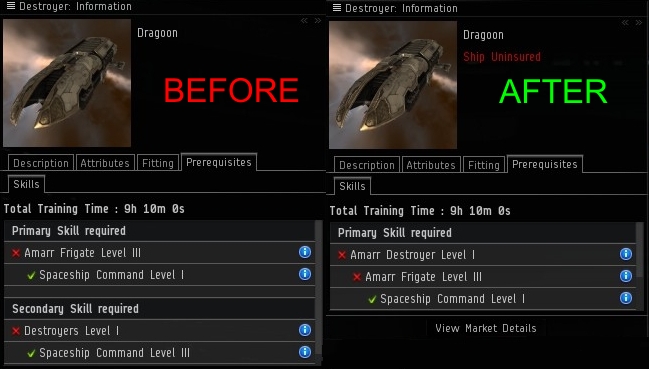 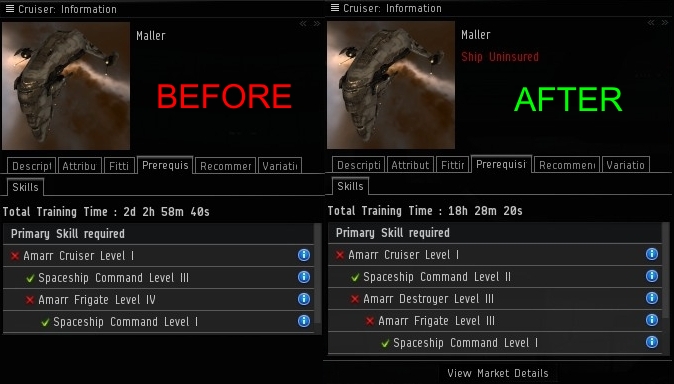 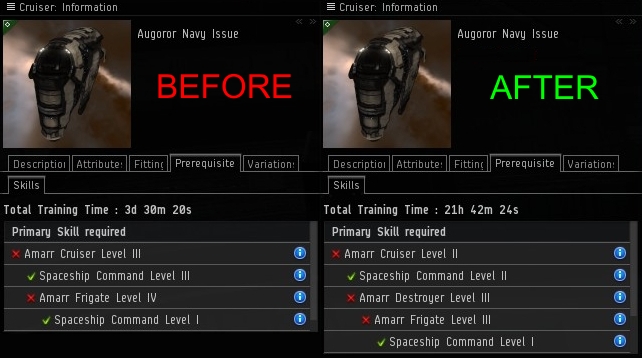 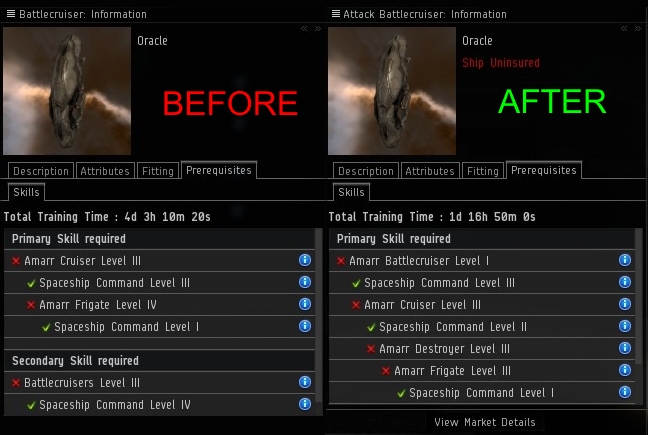 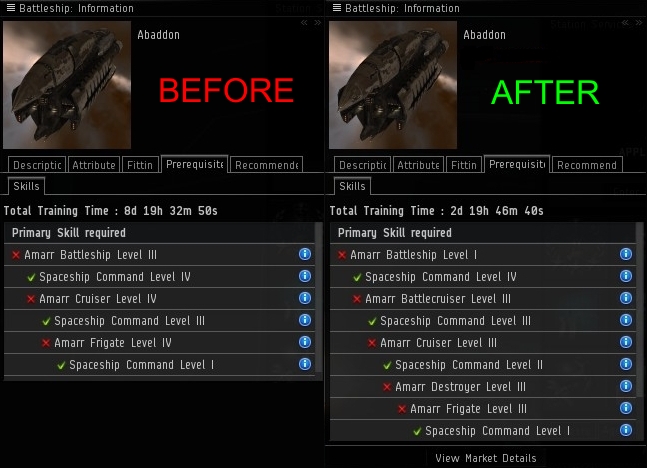 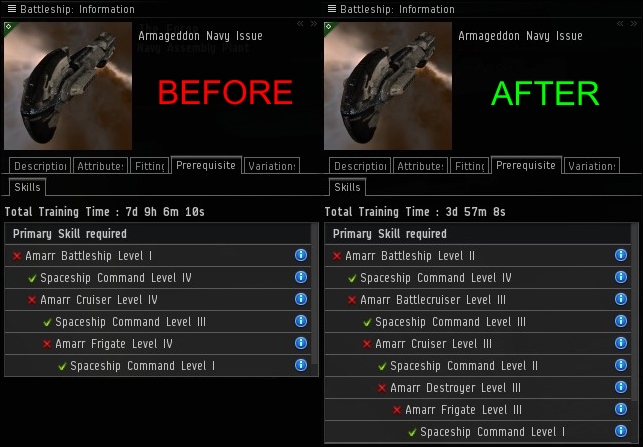 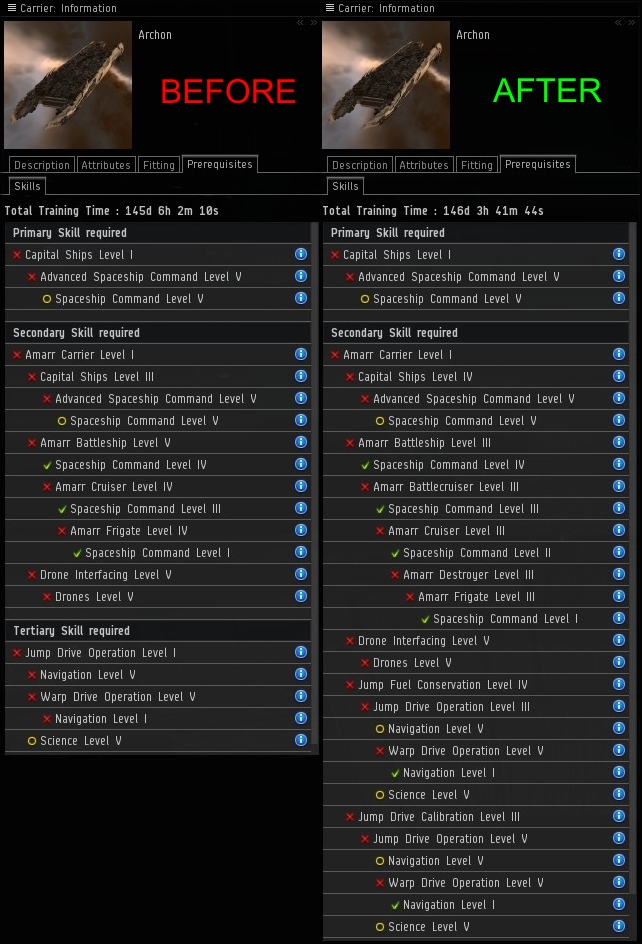 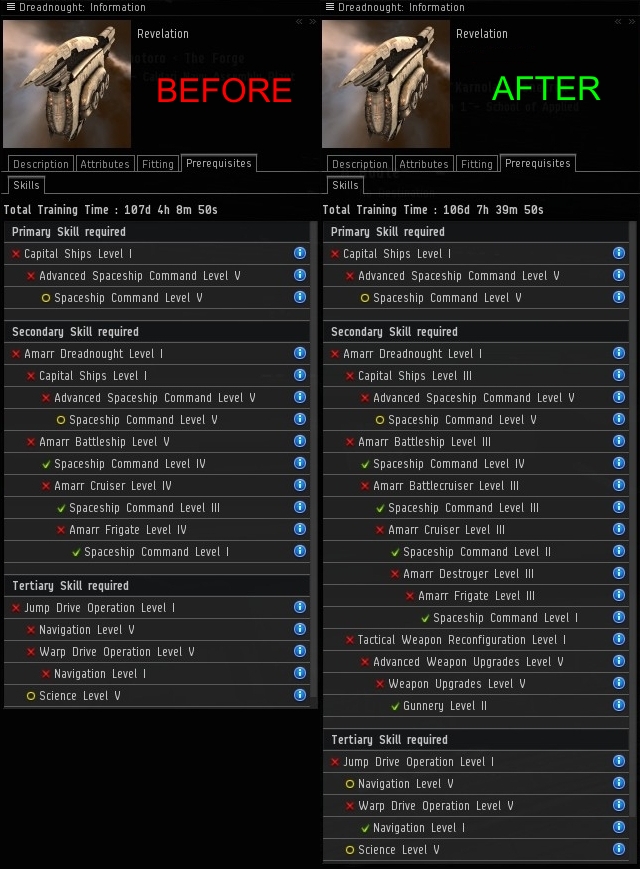 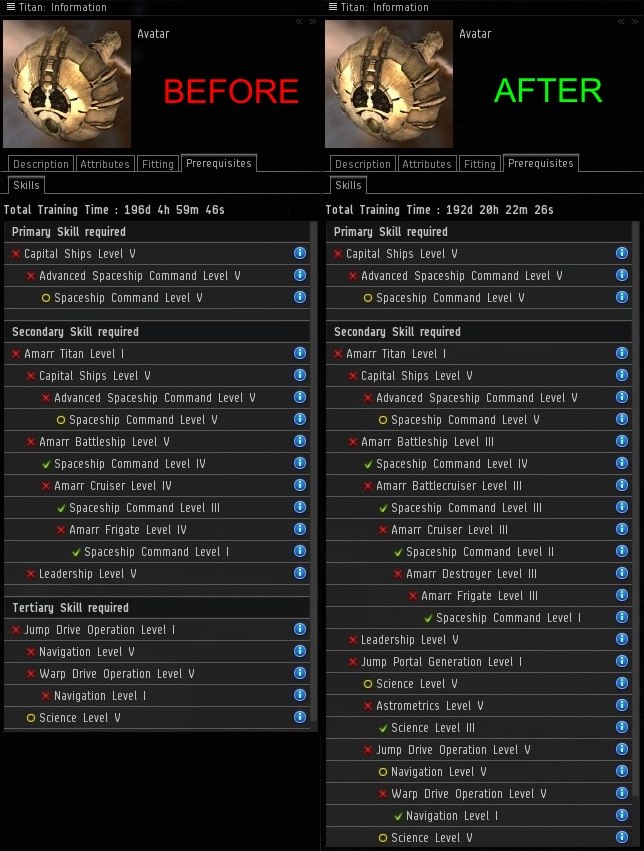 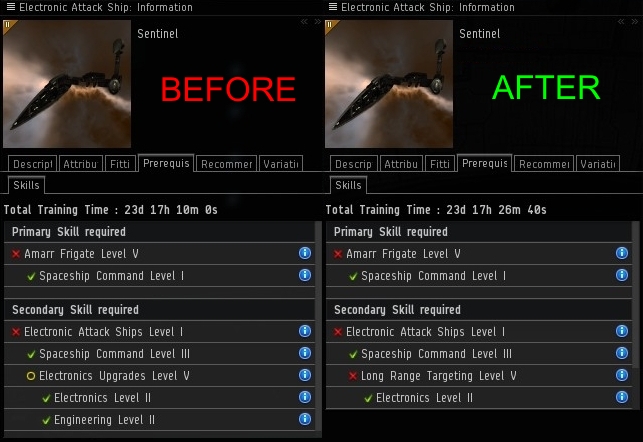 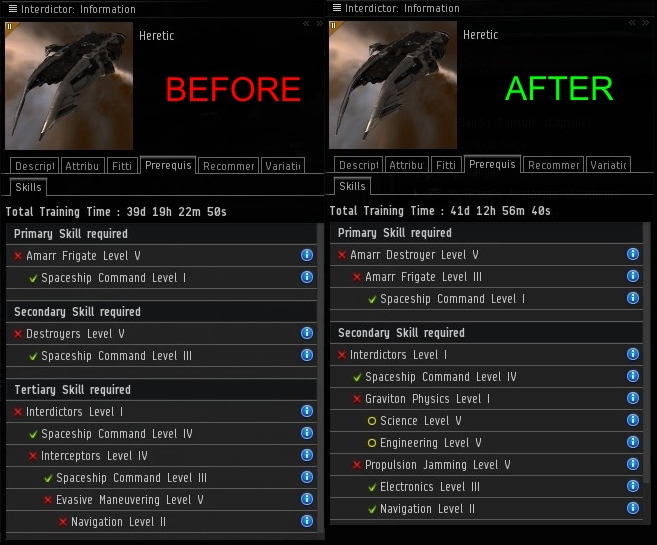 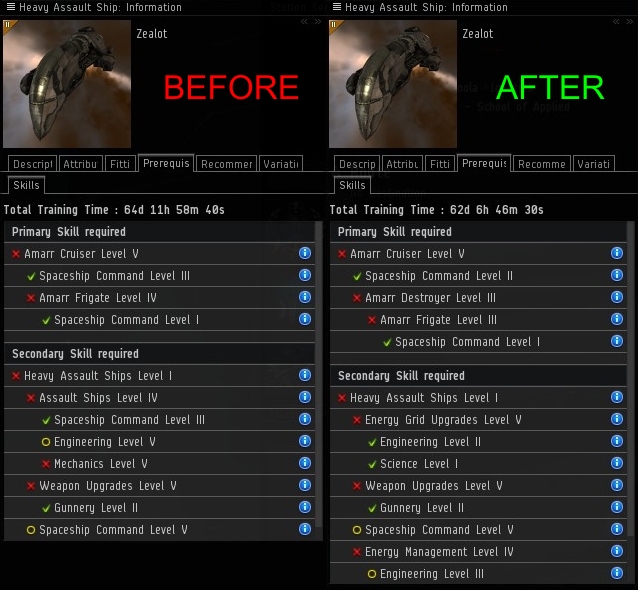 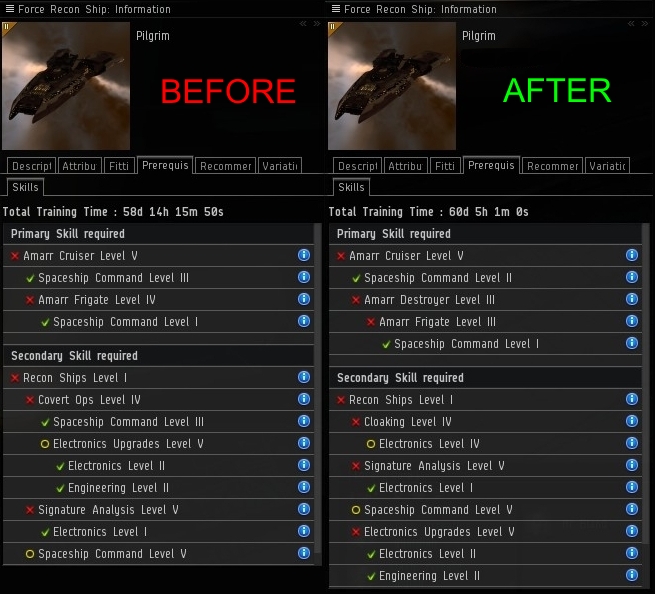 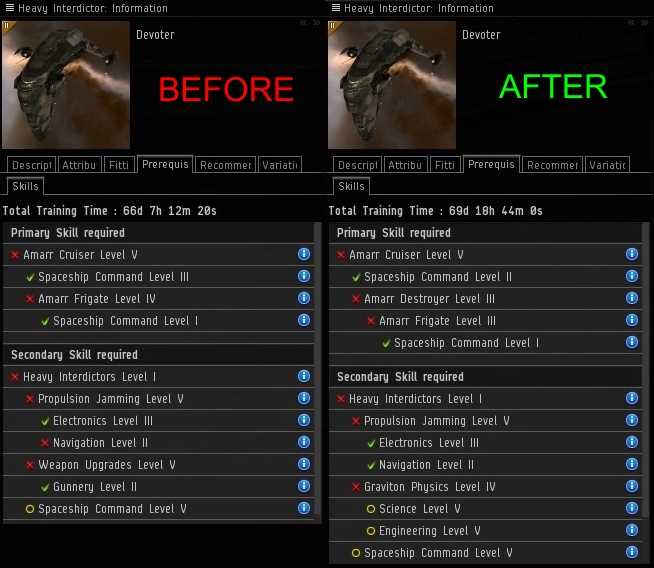 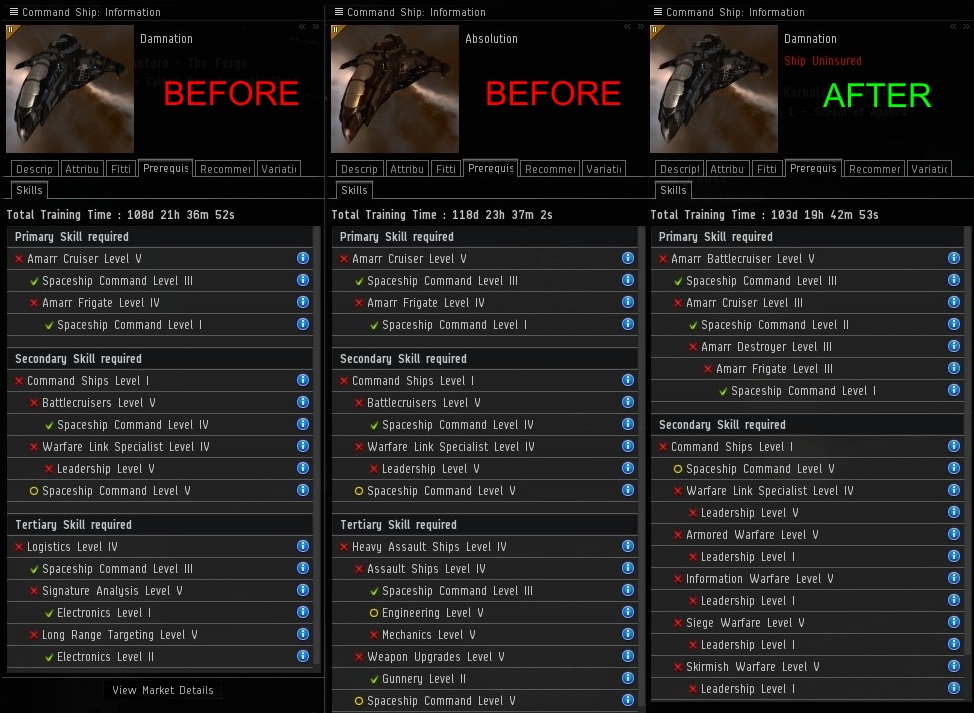 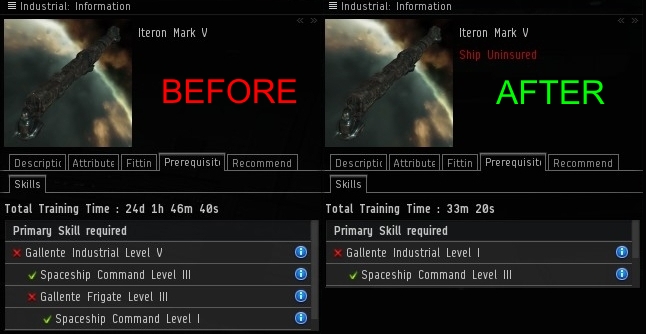 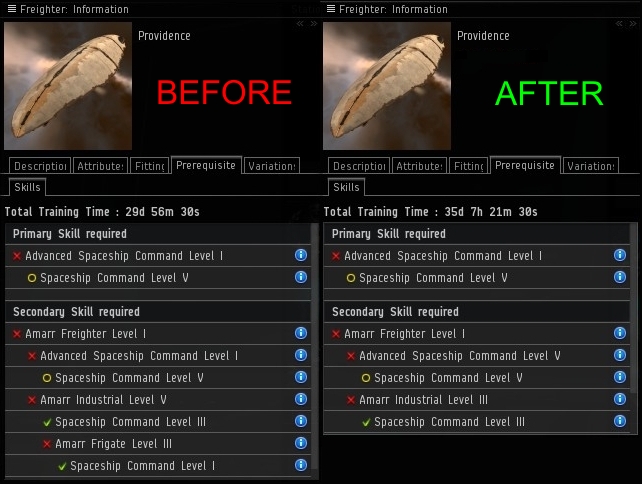 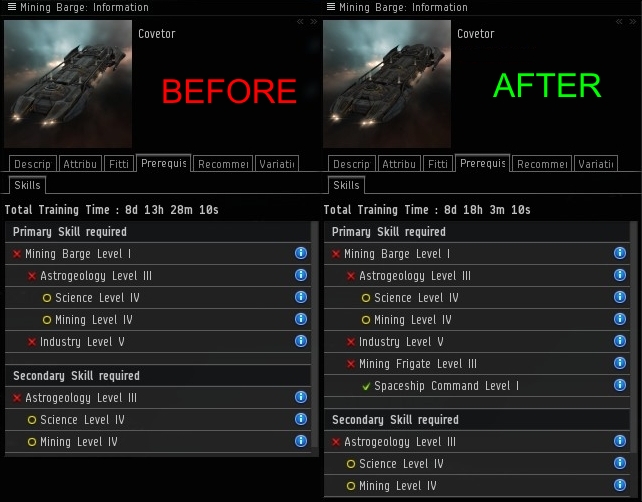 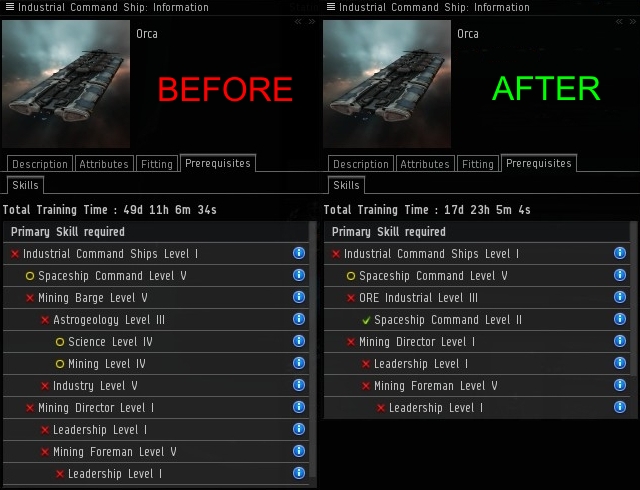 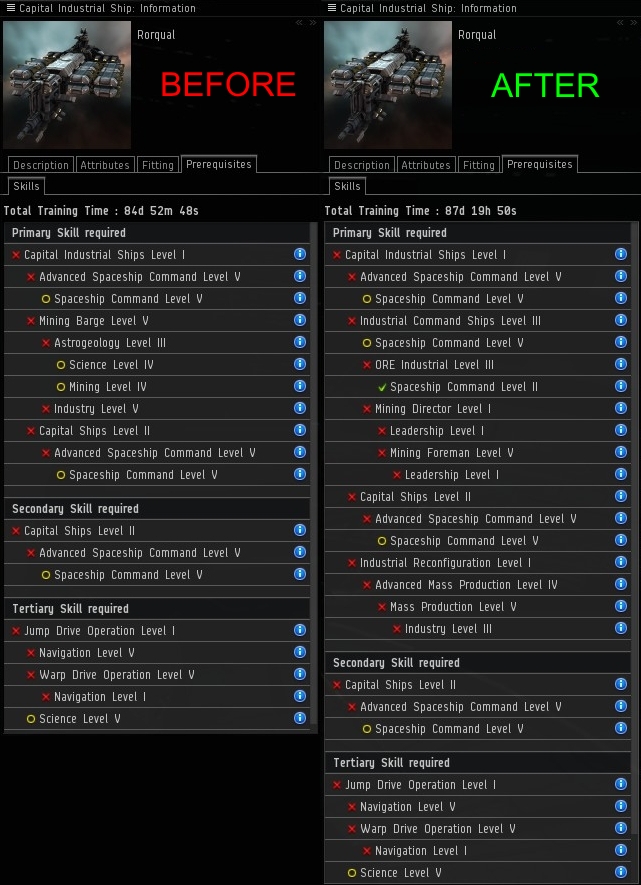 That was for the easy part. As mentioned above, since we are splitting Destroyers and Battlecruisers skills in four, we need to make sure we reimburse those properly to follow the motto of “if you could fly it before, you can fly it now” that we have been stating for quite a while now.

To understand how we are going to proceed, it’s wiser to have a look at current ship requirement themselves.

The trick is to remember that the Prophecy bonuses are based on the Battlecruiser skill. Thus, if you want to maximize the reimbursement, training Amarr Cruiser past 3 will do you little good. Aim for Battlecruisers 5 instead, as you will then get Amarr Battlecruiser 5.

Since we are also in the process of removing tiers, the Oracle, Naga, Talos and Tornado skill requirements will be dropped from 3 to 1, so you don’t even need to go past Battlecruisers 1 if you wish to fly them after the reimbursement.

Still following? Good, now applies everything we have said before to Destroyers, you just need to replace racial Cruiser with racial Frigate instead.

In case you wonder, the skill reimbursement also includes:

However, we will not adjust clone level if the refund causes your total skill points to go above your current clone capacity. If you have Destroyer and Battlecruiser 5 trained, you should account for approximately 6.2 additional million skill points, thus we highly suggest you think about upgrading your clone accordingly, especially if you plan on going into hostile or remote space.

All of this will happen for the Summer 2013 expansion. That’s a lot to take on, which is why we wanted to give you as much of an advance notice as possible so you can react accordingly. We do hope this will clear any confusion on the matter – all of this is final and should not change at this point.