The Retribution of Team Super Friends

Hello Capsuleers. By now you’ve probably heard that the name of the upcoming release this December is Retribution. Team Super Friends is happy to participate in this jolly endeavor of revenge, rage, repercussions and Christmas Carols. We’ve cooked up a set of features sure to spice up this dish of revenge (best served swiftly and sharply) and here to tell you all about them is I, CCP SoniClover.

Mutiny on the Bounty System

Here’s a little secret: the Bounty System is broken! Shocker, right? Well, that is all about to change. We’re going to muck out all the advertisers, poker stars and attention seekers currently clogging this busted system and add some grease and shoe-shine to allow real players to trample over each other in there as insert deity of your choice intended.

Below, I will go a bit into the nuts and bolts of the bounty refactoring, but first I want quickly cover what the goals are that we’re aiming to achieve.

The key one is to give people faith that money they put into the bounty system has a fair chance of actually leading to their target crying tears of fear and frustration.

We also want to support the overall theme of the expansion of strengthening the ties between actions and consequences, up to and including making it important who you associate with.

Finally, we want to support bounty hunting as a career choice, preferably in a way that makes it possible for newer players as well as older players to get involved.

The intention is to have the bulk of this work be ready in the Retribution expansion, but there are several items we then want to iterate on post-Retribution. I will mention a few of them later on. 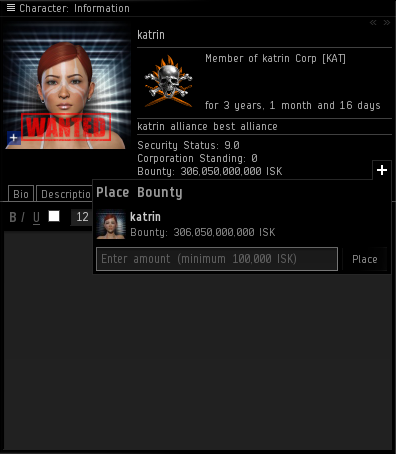 The core of the new bounty system is to pay out only a portion of the bounty at a time, instead of paying the whole pool upon a kill. Here are the pertinent points (with the usual disclaimer that things are subject to change as we continue developing this): 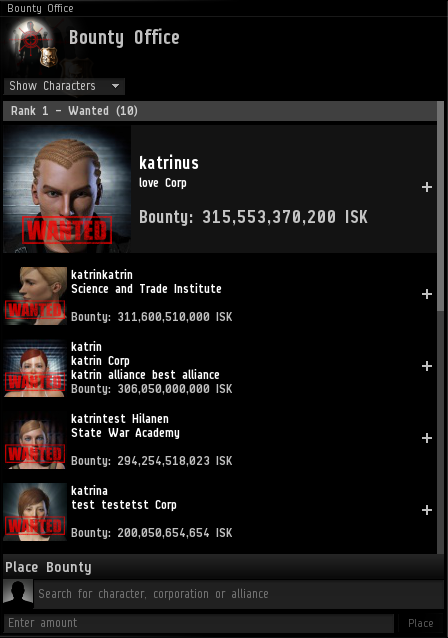 Our main focus is on getting the individual bounty system to function, but we feel extending bounties to corporations and alliances would be an excellent and exciting addition. So, well, we’re doing that.

Placing the bounty will work pretty much the same as for individuals. Each corporation and alliance has its own bounty pool. Bounties are paid out from these pools whenever a character in this corporation/alliance is killed. This means that killing a character can pay out from three different pools. If this happens, the most specific pool is drained first (i.e. first the individual pool, then corporation pool, then alliance pool). Viewing a pilot in space will still only show a single bounty amount – the total of the three pools.

Note that bounties are paid out for anything that creates a kill report, so you’ll get bounty paid for destroying for instance a POS belonging to a corporation that has a bounty placed on it.

The minimum ISK amount to place a bounty on a corp is 50 million. The minimum for Alliances is 500 million.

“Hello. My name is Inigo Montoya. You killed my father. I have his Kill Right. Prepare to die.”

We want to broaden the scope of who can become involved in the bounty hunter system. While much of what we’re thinking must wait for later releases (see the Iterative Work section below for a glimpse), one thing we want to do is allowing people to use each other’s kill rights. While not directly connected to the bounty mechanic, these two things tie nicely together in giving this sense of actions-having-consequences-theme we want to foster. Furthermore, it makes it slightly more possible to pursue a bounty hunting profession in hi sec.

Kill rights are part of crimewatch, so we had to sync up with Team Five O on their work in refactoring that system. We’re tying into the crimewatch system in two ways:

Kill Rights will now be created at the same time a Criminal flag is put on a player, but only for attacking in hi sec or podding in low sec. RRing a Criminal will not create a kill right (but still puts a Criminal flag on the repper).

The second way is in how the kill right is used. This is changing from previous functionality. If you have a kill right against someone, you can activate that kill right to make your target a suspect (i.e. give him a Suspect Flag, as explained in the crimewatch blog). This allows anyone in the vicinity of the suspect to engage him legally.

An additional functionality is that you can allow other players to use your kill right. You can mark any of your kill rights as open and set a price on using it. This price can be any ISK value you want, including 0. There is a new bracket icon for open kill rights, so spotting players with an available kill right on them will be easy.

Kill rights are bought “on the spot” in space, i.e. if you select a player in space and that player has a kill right on him for sale, you can buy & activate (one action) it right then and there. This immediately puts a Suspect Flag on the target, thus allowing you and others in your vicinity to attack the target. If the target player is killed while under a Suspect flag, then the kill right is ‘spent’. If the target manages to escape and the Suspect flag timer (15 minutes) lapses, the kill right is still available to be purchased (activated) later on.

Kill rights will continue to have a lifespan of 30 days.

There are a few additional things we’re looking into as a possible post-Retribution iteration work. Some of that stuff is too early to discuss right now, but here are a few tidbits of what could happen:

New modules are much less of a focus this time around for team Super Friends, but there are a few things here we’re doing: