An Update on Bug Reporting, Part 3

Hi all, CCP Goliath here to go over the work that CCP Tier has been doing on the bug reporting service.   When we launched the service almost a year ago, we knew that it was missing two vital components: the ability to communicate between players and developers/volunteers and the ability to see and edit your bug report.  While these missing features certainly didn‘t slow players down when it came to submitting reports, nor developers and volunteers while processing them, there was still a clear need for these features.

So, without further ado, let‘s see the upcoming new goodies! 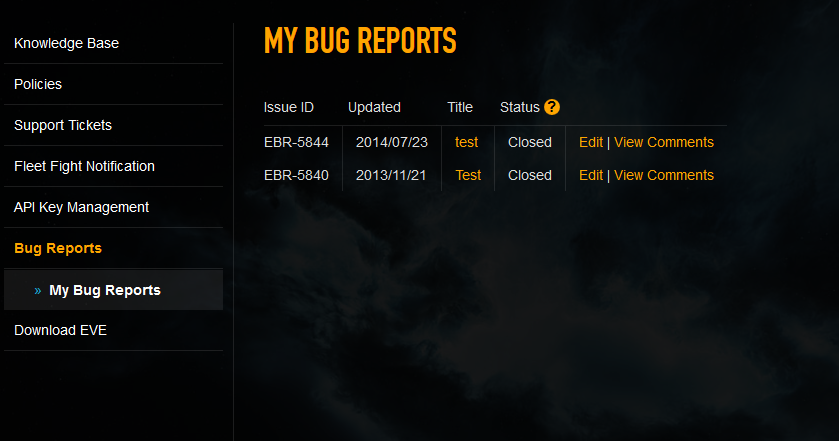 We made a new web page where you can access your bug reports:  //community.eveonline.com/support/bug-reports/my-bug-reports/.  There you can see your list of submitted reports (only reports submitted after the launch of the new service last year will appear).

There are a few bits of additional info for your convenience too.  First, a unique ID key.  Styled as EBR-XXXX, this is the number of your bug report in our database, and the first thing you should refer to when discussing a bug report with a developer.  Feel free to reference it in forum posts, tweets, and EVEmails or in discussions about the test server (Singularity/”Sisi”) or live server (Tranquility/”TQ”). 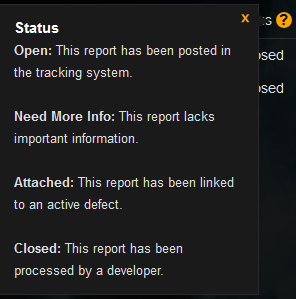 Second: the Status field.  This will display one of four options: Open, Attached, Need More Info, or Closed.  If a report is Open, that means that we haven‘t processed it yet, so it is either in the process of being investigated or it‘s sitting in the queue waiting to be addressed.  The bug report queue doesn‘t work on a first-in, first-dealt-with basis, so don‘t think that we‘ve forgotten about your report if it doesn‘t get processed in the timeframe you feel it should (but do tell us, so that we can improve our services!).  If the status of the report is Attached, this means that it has been attached to a defect in our tracker.  Generally speaking, this also means that it is assigned to a team who will be triaging it along with their other defects.  If the bug has been in the game for a long time, or it is very low impact, it may sit in a legacy holding bucket for a while before it makes its way to a development team.  This is simply just us prioritising in a way that we feel gets EVE players the highest value fixes fastest.  Need More Info is pretty much exactly what it says on the tin - we have a question for you in the comments and need your input before we can act further.  Closed defects are closed under one of 6 resolutions.  The resolutions will be invisible to you (you will only see (“Closed”), but for your information, here is a short list of the resolutions, and what they mean:

Now we arrive at the ability to edit your reports.  Please use this wisely – entering a quick report with scanty information but the idea of updating later is fine, as long as you mention that in the body of your original report.  If you don‘t mention it, the report may be closed for having insufficient information.  Additionally, editing a bug once it has been attached or closed will be futile, as we will no longer be checking that report.  The "My Bug Reports" page isn‘t the only place that you can edit your report from however.  We also placed an edit button in the body of the report itself, and we added the issue key to that page too, for convenience. 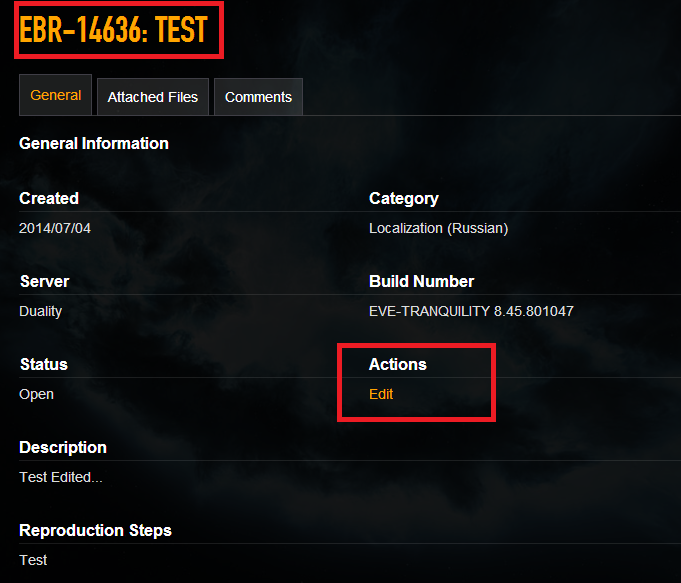 Although these new features will smooth out the way we work together to raise the quality bar of EVE ever higher, we are by no means ”done“ on bug reporting.  On the process side, we have been making a few tweaks here and there and recruiting for our Bug Hunter division.  All of this combined has allowed us to hit a new record high of 91% of filed bug reports processed in a release window.  It‘s going to be a challenge, but we are confident of beating that record again before the year is through.

There is also the matter of the in-client bug reporting tool (accessed via the Help menu).  This is our preferred method of receiving reports, as it automatically attaches things like logs, dxdiags, etc.  It also allows you to take screenshots, annotate them, and upload them along with your report.  Anything that you submit via this tool will appear on the My Bug Reports page on the website, and will be as interactive as any report submitted via the web.  There is currently no way to access the My Bug Reports section via the tool, but we will see if we can get a solution for this in the future.

We will also be working on an email notification system to allow us to let you know directly when we have updated your report or changed its status.  This will further reduce the number of bug reports we are forced to discard for containing insufficient info, as well as keep you informed in real time when we are working on one of your reports.

There‘s also an idea that the QA department have been toying around with – that of making a section of our defect tracker „public“, and allowing you to vote on legacy issues to let us know where you would most value our efforts be focused when we work on technical debt.  This is an idea very much in a raw state, and any thoughts or feedback that you have towards this (even if it‘s just saying „I‘d use it!“) are hugely appreciated.

Finally, one more reminder that our Bug Hunter division of volunteers are recruiting again, and we want you! If you‘re interested in getting involved, please apply here (you need to be logged in to the Community website to access this link). 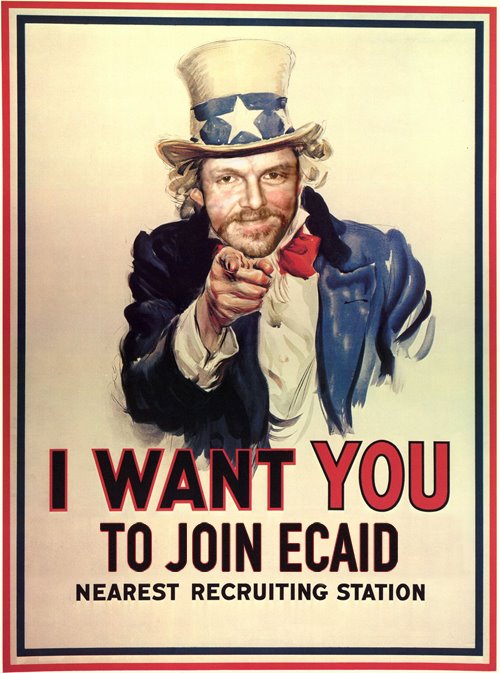 Some of you who are used to the old system or are decently tech savvy might be looking to the URL to do some viewing of other bug reports. We have put measures in place to prevent any of your reports being viewed by an account that didn‘t file the report.  If you attempt this, you will be greeted with the following screen:

We also fixed some style issues with the old system.  Increasing the height of the comments text area for example, and we increased the length of the build field so that you can see all pertinent details, even if our branch names are long.