Updates to Team Security and the ongoing war on botting

Today I bring you graphs and news that I hope you all will enjoy. Specifically, I want to discuss the current progress being made on the botting/RMT front, and some changes that are currently ongoing here in CCP land.

The last few weeks have been a busy time on the anti-botting/RMT front. We’ve been hard at work catching ~bad guys~ and applying the Ban Hammer™ to those unscrupulous individuals who decide to violate our End-User License Agreement and Terms of Service. This has been a slightly different push than what we’ve been doing in the past, but has yielded a lot of interesting results.

Unfortunately it’s still too early to talk about that at this time. I do however want to go back a bit and revisit one of the initiatives that originally was trialed with the EVE Security Taskforce in 2011, and was reinstated in full force by Team Security in February 2012. That is what we colloquially still refer to as “ESTF Bans”, or in layman terms, our multi-faceted banning system which stops bad guys in their tracks.

The system ties greatly into the policy that we put in place at the same time back in 2011, which had the goal of making our overall stance towards this malicious behavior more clear and reflect that in the punishment which was handed out. Specifically, we spoke in terms of the “Three Strike System”, and the goal was to curb behavior and forcibly motivate people to play fairly, while allowing people who thought engaging in this behavior was OK due to our previous lax policy on this to become law-abiding citizens once again. The soon-to-be-obsolete-“Three Strike System” is as following:

While we heard from a lot of you initially that this policy is too kind on the bad people, our goal at the time was to induce a gradual change and engage in a “slow burn”, that is to say tackle the issue as a long-term problem rather than trying to solve the issue all at once, which isn’t viable. We’ve always been open to iterating on our process and policy when appropriate. We always use data to guide our decisions, and this is no different. Here’s a graph showing you the “ESTF Bans” for 2012 Q3 and Q4: 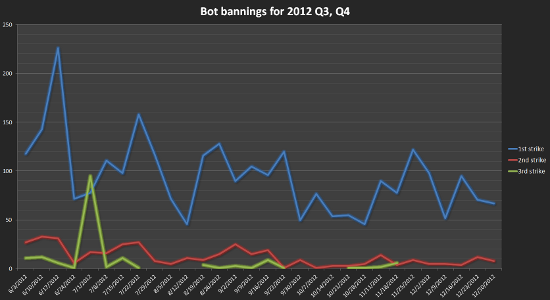 As you can see from this graph, the there’s a few interesting trends to observe:

From the analysis and discussion we’ve had on this subject based on this and more data, we feel like this is now a good time to tighten this system up. As such, effective today, this is our new policy 2 strike policy:

This reflects our increased efforts towards stopping people from engaging in behavior that is damaging to New Eden and all of you who play by the rules. It’s another change we’re happy to make with the goal of making life harder for those that do not want to follow the rules. We hope you appreciate these changes. A lot of you have been asking for this change for a while now, and we feel the time is right. Of course, we’re always looking and weighing options as to increase the pressure and make these people’s life harder from more angles. Any ideas you may have as to how to achieve this is something we greatly appreciate. We will also be doing our year-in-review session at Fanfest for the third year in a row now. There we’ll be sharing a lot more data and pretty graphs with you about the war on bots. We look forward to seeing as many of you there as possible!

We’re currently going through some organizational changes in regards to the team that handles matters like these. Due to CCP Sreegs leaving CCP to pursue other opportunities, Team Security will be taking a new shape under different management and with a new team member.

The team will now consist of:

This team will be overseen by the VP of Customer Relations Management, and this will not impact the work being done by the team.

That is all for now. We hope to see you all at Fanfest!