Carnyx recently brought with it some big changes to familiar icons. Players logged in and suddenly found all the things around them were the same… but different.

The bracket icons for everything in space and on their overviews had all suddenly changed. The great Iconocalypse of 2015 had occurred and new icons arose in the place of those which had fallen: 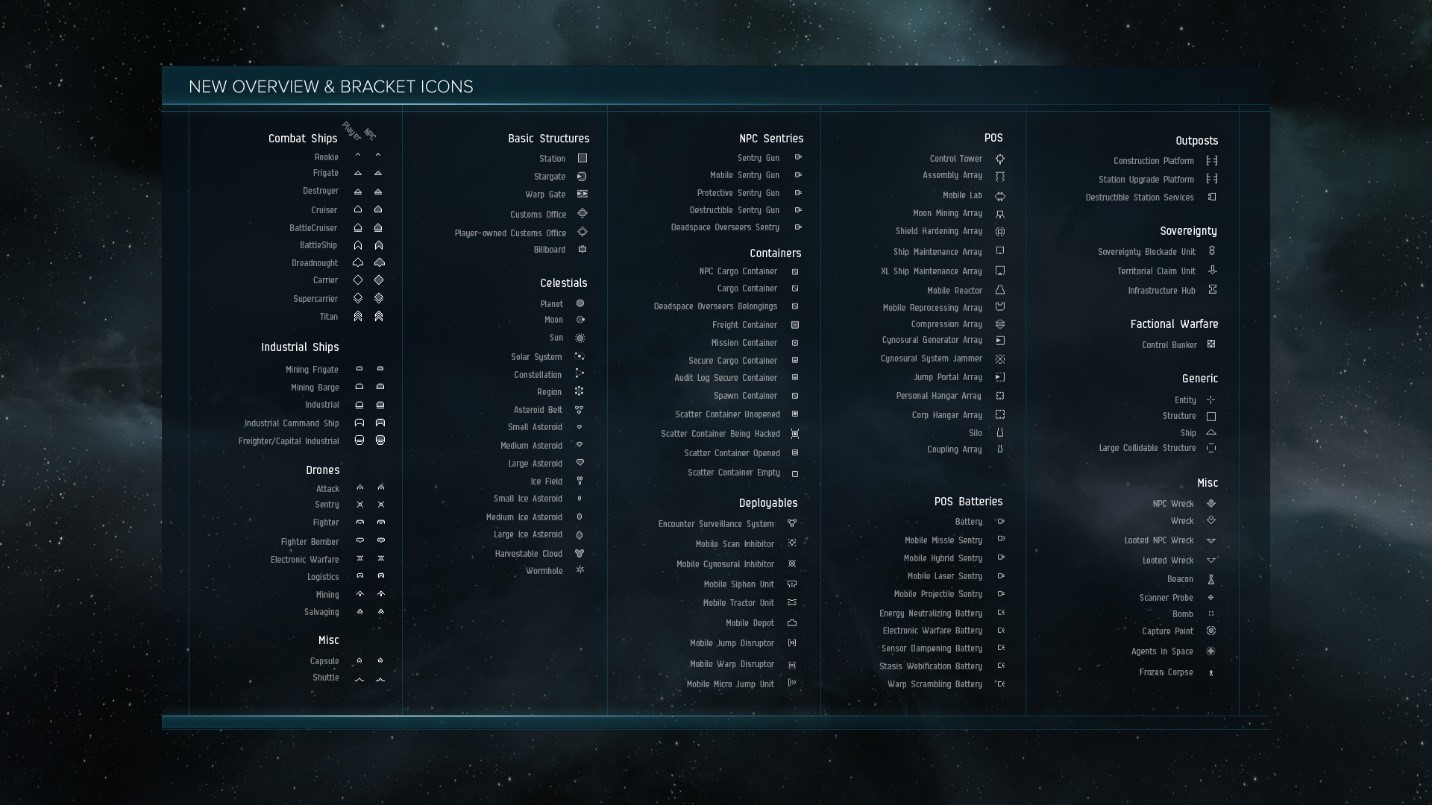 After the initial psychological adjustment period of the new icons had passed, many of you rightly asked us: why had we decided to overhaul the bracket icons to begin with? There wasn’t anything imminently bad about the previous set, players were used to them, and had gotten accustomed to staking their situational awareness and expensive ships on quickly recognizing the tiny differences in square sizes and cross thicknesses that defined ships on grid for years. So why the change?

To answer that better, these were our initial goals for the update (some of which were laid out on the first devblog many moons ago:

That’s the why of the update to bracket icons. Now let’s get into the how.

A Method to the Madness

The many in-space entities you can encounter in EVE can be categorized in numerous ways, and along different axes. We knew we needed a system of underlying rules for managing the expanded set of icons so that certain heuristics, or groupings, could be identified at a glance.

This began with the most high-level separations, for which we assigned a basic shape profile: 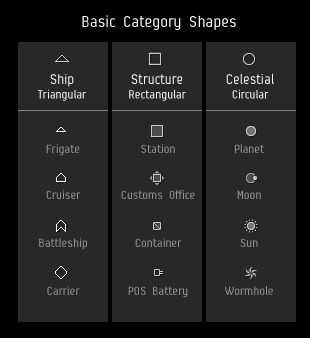 Another super important axis of distinction was between entities that were player controlled vs. NPC/AI controlled. After several explorations we settled on NPC entities having the same base shape, but with an inner fill compared to their player-controlled counterparts. 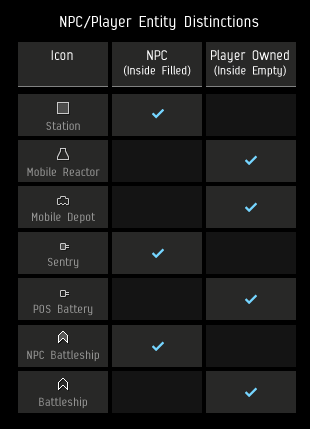 Releasing the thin wireframe icons accentuated the fact that the UI scaler does a suboptimal job of reducing 1-pixel strokes to less than a pixel. This resulted in a worse experience for a certain segment of players playing at 90% UI scaling, who ended up having a markedly worse experience with the new icons. 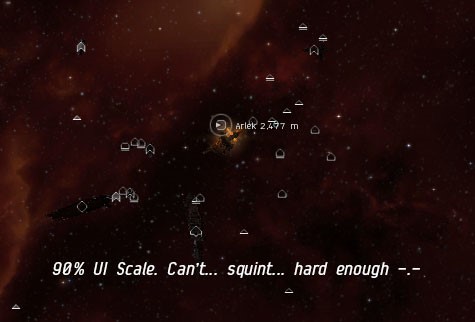 EVE UI has always been designed with pixel-perfect accuracy at its core. And when we decided to introduce a UI scaling option for accessibility reasons, we did it for the sake of giving people options to customize their UI, yet with the known tradeoff of knowing the texture scaling would create less than ideal-looking experiences in certain situations. It was by sheer luck that up until now most of the other issues created at 90% happened to be manageable, but the new bracket icons were so gameplay-critical that it made for a step back in usability for those playing at 90% scale.

Mea culpa to those affected. Making the icons at least usable at 90% scaling is one of our top priorities for improvement, along with others outlined below.

The new icons brought major change to the way in-space entities are represented in EVE’s UI, but we’ve also identified several areas of improvement thanks to your feedback. Here are the top items on our list to tackle:

We are aware that a sudden and drastic update to some small but very important space symbols may have inherently vaporized several trillions of ISK from the economy. As pilots undocked expecting their familiar foes to be square brackets and crosses they unexpectedly came under attack by chevrons, diamonds, and house-shaped adversaries armed to the teeth. Some were so spooked and disoriented they began to fire on any geometric symbols in their vicinity. Others believed they were being attacked by their own warp bubbles and returned fire… Those that managed to adapt quickly in the early days of the great Iconocalypse of 2015 certainly profited handsomely from the confusion it sowed.

But in New Eden space is merciless, and change is ever-present.