Hundreds of thousands of players roam the New Eden Universe on a regular basis, creating an ever changing network of meaningful social interactions. From these interactions a complex and unique society has emerged over the years, with a culture rich enough to fill a universe – or two!

Thrilling stories about exploding spaceships in a beautiful universe, dark spy work, incredible heists and massive wars spanning several years have inevitably created strong bonds and lead to meetings in real life (a realm rumored to exist outside the EVE universe) where people can discuss the amazing stories that have emerged. Where they can laugh about victories and losses alike, and simply enjoy a good time along with fellow New Eden inhabitants.

The typical player run EVE event would consist of a lively evening in a bar with fellow pilots, but some event organizers take it even further; even going as far as inviting CCP developers over for events that span days, to hold lectures and presentations and to share their vision of an EVE Online that is forever – and of course to have fun together!

Not many player organized events are as established, organized, well-known, and visited by as many players and CCP developers as EVE Vegas organized by Zapawork.

The past and present EVE Vegas 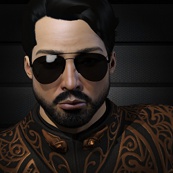 The first EVE Vegas event was held 2006 at the Rainbow Bar & Grill  and then, as the meeting got more established with BlackHole Bob as organizer, it moved on to the Imperial Palace with great success. Until 2009 the EVE Vegas event was held every year and soon gained popularity amongst players. Having the event in Vegas probably didn't hurt with plentiful drinks, gambling and other Gallentean-like displays of debauchery.

A driving idea behind EVE Vegas was, and still is, to offer players a fun environment where they can talk about EVE Online with fellow pilots and developers and feel like they are on vacation without a care in the world.

After 2009 the original organizer BlackHole Bob was too busy to continue setting up such a massive event and EVE Vegas went on hiatus for a while.

However, such an incredible event cannot simply cease to happen and soon enough a new organizer stepped up. This new organizer, Zapawork, had a vision for elevating EVE Vegas into something even more outstanding: Instead of having just a player gathering for several days – as awesome as that is in its own right – he wanted to turn EVE Vegas into a real convention where players and CCP developers would be equally represented. Since New Eden is built to empower players to write their own history, it made sense to Zapawork that a player convention should include speakers who both make the game and who make the content that drives it.

EVE Vegas 2011 was based on Zapawork’s ideas and it turned out to be major success with four CCP developers speaking (and several more attending) and 183 tickets sold to players. Including volunteers EVE Vegas 2011 saw almost 200 attendees, interesting presentations and lots and lots of fun.

The concept of EVE Vegas

Asking Zapawork about EVE Vegas and the concept behind this event revealed some interesting points that might apply, on a smaller scale, to other events as well or might turn out to be good guiding ideas if you want to set up your own events.

EVE Online is known for its unique massive single game world, the New Eden Universe. Every player has the chance to interact with everyone else, each action can influence anyone else in a myriad of ways. This level of interaction unifies the players who are all all citizens of the New Eden and all share that common ground which makes meeting up at player gatherings easy and a lot of fun.

At player gatherings barriers are broken and everyone can get to know each other,  forge friendships, or cement alliances beyond that which would be possible through in-game interaction alone. Knowing the face of the person on the other side of a screen and knowing you’ll see them again makes everything much more real. Zapawork mentions that exactly this real life trust is the base to build Eve Vegas on and that these real life meetings can multiply the fun of playing EVE Online.

Zapawork says that real life meetings, and EVE Vegas especially, allow attendees to not just learn through the game itself, but also to learn how other players are making the most of it. While reading forums or guides can be valuable, nothing beats sitting down with fellow pilots, discussing the affairs of the universe, and learning from them over a drink, maybe even making friends for life. A group of friends might walk into EVE Vegas as a corporation of five and might leave as part of an alliance of hundreds or even thousands! The face to face communication and trust earned from real life meetings can turn out to be a valuable experience that helps corporation or alliances to grow and better reach their goals.

This year´s EVE Vegas will have more CCP developers than ever, a multitude of prizes and of course plenty of partying, events and massive amounts of fun. EVE Vegas 2012 will take place in the Paris Convention Center Las Vegas, Nevada, during  October 5 to 7, 2012.

The number of speakers stands at a whopping 14. Seven of them being CCP developers while the other seven are seasoned EVE Online players. Together they will cover a wide and interesting range of topics about EVE's future, past, and present.

EVE Vegas also offers prizes to those who take the leap. Buying a ticket to Eve Vegas can net you a free suite upgrade, limo rides to and from the airport, EVE Store items and even a private dinner with all seven CCP developers at Gordon Ramsey’s Steak. EVE Vegas also has staged prizes which get unlocked as soon as a certain amount of tickets are sold.

With all these many interesting aspects of EVE Vegas 2012 lined up, we already see again a lot of interest in EVE Vegas and if you are curious to visit an EVE Online player gathering then EVE Vegas might be your top choice.

It is simply astounding how much care, passion and work by our players put into player gatherings and events like EVE Vegas just to offer the EVE community a fantastic opportunity to relax, learn and enjoy having a good time with fellow pilots and inhabitants of New Eden. Just go there and find out for yourself - docking requests are being accepted!