Alliance Tournament XIII is full in swing after a weekend bustling with mad action and exploding spaceships.  All the action and fun was streamed live and fully broadcasted on August 15th and 16th, 2015, by our wonderful volunteers from ISD! 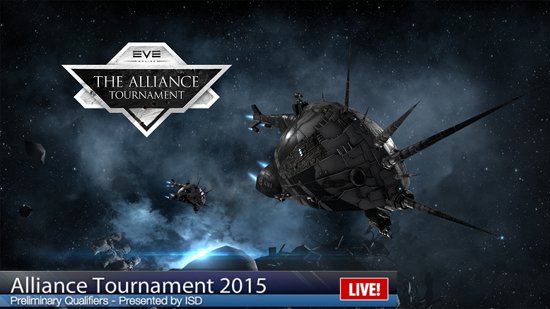 Before the second tournament weekend arrives with more exciting matches, I would like to give a brief recap of the first weekend and a peek behind the scenes to present some of the heroic work done by the ISD volunteers to deliver this stream. But first, here’s a quick summary of the first weekend.

The first weekend in review

During the first weekend we saw all 64 alliances fighting for survival and supremacy in each of the 64 matches, played out over two days and two systems. Intense brawls, bold maneuvers, and great sportsmanship together with clever tactics – the first weekend had it all! Before we dive deeper, here’s a quick recap on what the Alliance Tournament is all about.

The Alliance Tournament is a highly anticipated annual event organized by CCP where teams from various alliances from all over New Eden fight against each other for eternal fame, piles of PLEX, and unique prize ships. The winners are determined in a double elimination process (one loss drops you into the loser’s brackets, two losses and you are out). Matches take place within a closed off system far off in unknown space, ensuring that the battle is decided only by those competing. The full set of rules is available here.

The tournament is live streamed and broadcasted with our special “Fancy UI” overview to help visualize the ongoing battlefield. Fancy UI keeps track of each fleets control, attack, and defensive capabilities in real time:

Results of the first weekend

Newcomers as well as established alliances and previous Champions have enlisted themselves in AT XIII. See more about the various teams in the AT XIII team summaries on Crossing Zebras by Apothne.

The first weekend of AT XIII was broadcasted by the ISD volunteers in corporation with CCP.

From the first match until the last we saw teams viciously fighting for victory using a range of team compositions: Typhoon Fleet Issues, Tactical Destroyers, Barghests, Nightmares, Flagships; some teams even used some unique ships given out as prizes in past tournaments . The team tactics showcased were equally as varied, with close-range brawling, long-range kiting, armor turtling, tinker setups, clever use of micro-jumpdrives, and even remote hull repairers. Check out the  AT XIII weekend summary on EVENews24 by Tiberius StarGazer and the Highlights of the first Weekend on Reddit by ChessurSB.

Raw footage of the first weekend can be found here and here.

Replays of the matches are available via the CREST interface. A great visualization of those replays can be found on Null-Sec.com in the 3D match viewer (for example the first AT XIII match)

Overview of the stream and stats

Due to the sheer amount of matches (a total of 64 matches over the course of only two days), the matches had to be distributed over two separate systems. To split the workload and to ensure the best stream quality, the decision was made to broadcast the first weekend on two streams – one stream for each system.

A team of 8-10 volunteers worked actively on the stream, with several more were on standby. The testing and dry-runs lasted for around one month. ISD Athechu was the project manager and kept everything together. ISD Buldath was second in command and also spent lots of time testing and setting up streams. Both volunteers live-streamed the entire first weekend of the Alliance Tournament, while several more volunteers supported the stream with chat moderation, updates and more.

The stream itself was a major success, especially considering that this was the first time that ISD did engage in such a large live streaming event. It was hoped to reach 2000 viewers. After the live stream was completed and the numbers available, we saw that in average 4000 people watched the stream with a peak of 4600. Well done, ISD!

The following parts are written by ISD Athechu and ISD Buldath to give you first hand insight.

“The first step was when the dev blog for ATXIII was released and I noticed that CCP wasn’t going to stream the first weekend.  I thought to myself that ISD could do this as we have done things of smaller nature in the past so figured why not try for something on a larger scale.

I focused on building a team and sent out an email which about 15 people replied wanting in on this.  I created jobs that needed to be filled and created responsibilities for everyone.

ISD Buldath and I took over streaming basically the entire weekend and with the night before planning late into the evening we realized some of what we planned just wasn’t possible or really feasible such as commentators or switching off streamers.  So we ended up streaming both days during the week.”

“When we were first given the idea that perhaps ISD could stream, I was excited at the opportunity. Normally Preliminary Fights were not streamed, or at a reduced capacity. It was something new, exciting, for the whole team, as well as for the streamers themselves as nothing of this size was ever attempted before.

The first thing we experimented was with OBS, the streaming software. We tried taking feeds from two different cameras, and then mix them all together to have them showing. The first major issue with this was that camera crew would need to record, render, then send that data to a central client. There would be two central clients, one for each system. This created issues with latency and quality, since not everyone had the same type of hardware or software.

It was at this point we were offered the idea of being able to use the FancyUI, and this scrapped everything and we had to start from scratch.

About a week before AT went Live, we were given a time frame of when the FancyUI tools would be ready, only a few days before the live stream. The day when we got the tools, we spent day and night, all available time, all the way up to that Friday night testing, experimenting and implementing ideas to make sure everything worked great.”

“The weekend was very rough … I was tired of just sitting in a chair and just watching matches.  While it sounds really easy, think about it getting up about 3 hours prior to the start of the first match getting all the needed client(s) ready making sure commands are applied, streams are good to go, information was updated, no technical problems the list just goes on.

Then the matches begin and we sit there all day basically.  So lots went on behind the scenes and I’m sure CCP had something along the same lines as we did.  It was a great time working with all the GM’s and CCP members as well.

Think my favorite was while I was streaming ISDSTAR2 my streaming client crashed sometimes and while in a call with ISD Buldath I would just go ‘Uh Oh’ and he would just say …’I don’t like when you say that’.”

“It went far, far smoother then we were expecting. There was a short hiccup at the second match that lasted half an hour, but that had nothing to do with us and the streaming part itself. I know Athechu had a few issues with his streaming client with lock ups and freezes, but it went smooth regardless.

We had ISD Buldath as camera for system 1. We had ISD Athechu as camera for system 2. We had ISD Dorrim Barstorlode from the ISD CCL team helping update and keep Moobot in track, as well as moderation. We had ISD Arooga helping with moderation and answering questions both in-game and in both twitch channels.  We had ISD Monksnark helping ISD Dorrim Barstorlode with Moobot. Thank you ISD BH Newmind with helping us test the FancyUI software on Singularity! We had ISD FlowingSpice spice up the Channel descriptions, including adding pretty pictures and getting everything organized. We had ISD Jarret help us with image pictures for the "Presented by ISD" static image. And many, many more that I am forgetting to write down!”

Was it worth it?

“Absolutely it was.  Despite all the planning and working on things and the long hours it was.  People always ask me if ISD is worth it and what are some of the perks?  Well I would say this is a very nice perk if you’re able to do it.  I would be happy to talk to anyone who has questions about STAR or ISD in general.”

“It was worth it. So, so very much worth it! It was a huge learning experience for all of us and I would Love to do it again.”

With those words I would like to close this spotlight, but not before properly thanking ISD and the volunteers who spent countless hours in a most selfless manner to support the EVE Community.

More exciting matches are lined up, and teams are ready to fight tooth and nail over the next two weekends to reach the grand final on August 30th. Make sure you tune in starting tomorrow at www.twitch.tv/ccp so you don’t miss the fun!