Fixing some things and moving forward

First off, ship spinning. The ability to see your current ship within the station hangar. This was removed when we released Captain‘s Quarters, as we felt the perspective from your own bridge overlooking the ship was enough. As it turns out, it didn‘t allow you to look at the ship from all angles, it requires far more GPU and CPU power than simply rendering a ship and a hangar and, importantly, we didn‘t retain UI functionality such as drag-dropping a ship onto your hangar to activate it or double-clicking on the ship to open its cargo. We know that it‘s annoying as hell logging into a station on a craptop trying to sort out some market orders and feel it slowly roasting your lap while it renders your pencil skirt-wearing Caldari commander lady. We are addressing this now.  The original UI functionality is scheduled to be retained. Rather than a checkbox in the escape menu, you will simply be able to board and unboard your ship, toggling between Captain‘s Quarters and Ship Spinning mode. Your client will remember your last choice, so if you left your station while boarded, you will be boarded the next time you find yourself in a station and vice versa. Expect it on the test server soon™.

Second, while introducing the new turret graphics, we decided to experiment with using rendered views of each turret to replace the icons that you see in the fitting screen, HUD, market and on active targets. It turned out that the new turret models, while heavily detailed and cool, didn‘t lend themselves well to being drawn in an area just a few pixels wide and tall. Usability suffered. It was hard to distinguish between turret types. As a result, we will be reverting the change so that turret icons use the original custom drawn icons, rather than 3d renders of the turrets themselves. You will still be able to get the 3d preview of the turret, to celebrate their uberness while reading their stats.

Third, we‘ve made a number of improvements on the skin shader and on shading within the Captain‘s Quarters in general.: 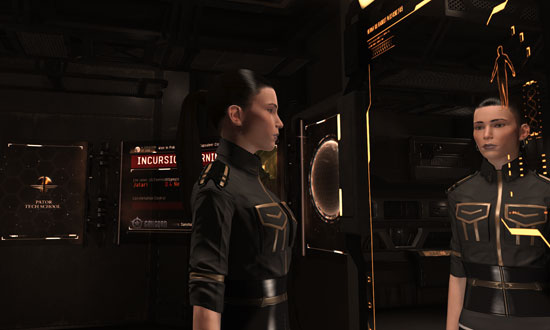 Basically it will look better and less harsh in conditions where there is much contrast, such as the Minmatar captain‘s quarters.

Oh, and we have a new cyno effect. It is scheduled to be out on within a week, in WIP state, without sound. We‘re looking forward to getting your feedback on it. We‘re hoping that you‘ll be spending liquid ozone like there‘s no tomorrow for the pure joy of seeing and hearing that effect.

All in all, we‘re moving forward. It‘s too soon to make announcements about what expansions and features we are developing, that will be announced in due time.