I accidentally the entire market

After the release of the last statistics dev blog, one of the main requests for information to go alongside the PVP data was for information on the actual popularity of various ship types. Instead of raw numbers on how many are blown up, in this blog we shall show the relative popularity of various items against others of its type on the market throughout the past. These do not show the total individual numbers of these ships/items, they show the number of them traded on the market. This means that if the same ship was traded through the market twice, it would count for two.

These graphs show October 2003 to March 2009, a span of 66 months, and you can click any of the graphs to see a larger version. 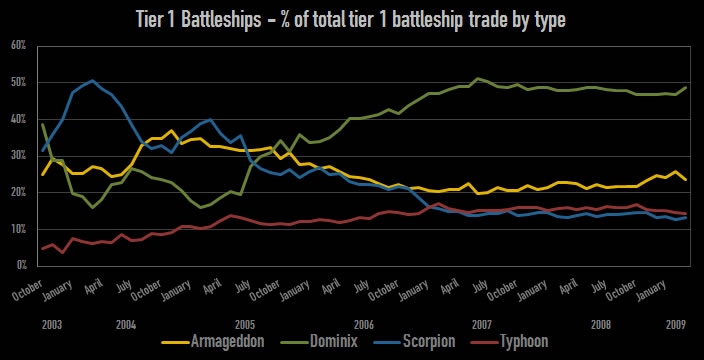 Interestingly, the Scorpion has gone from being the most popular tier one battleship in 2003 through mid 2005, to being the least popular from 2007 to now. This can largely be attributed to balancing changes to ECM in April 2005 and the introduction of other, preferred ECM platforms such as the Caldari Recon ships in December 2005. 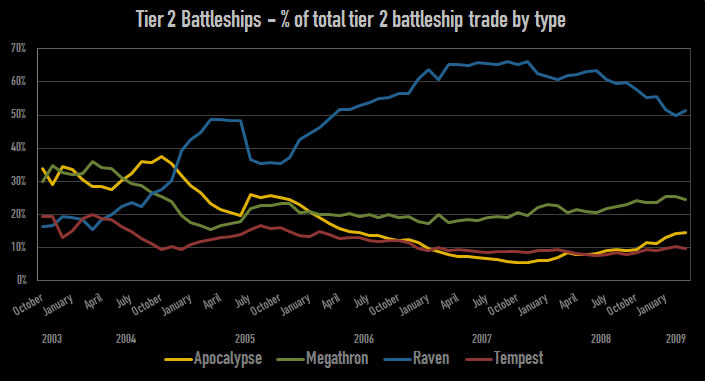 Missiles were reworked considerably in the Cold War expansion of July 2005, from a system where all missiles did full damage to their targets to the current system that takes the signature radius and velocity into account. This explains the dip in the popularity of the Raven at that time. Interestingly, the actual number Raven trades through the market has stabilised over the past year, whilst other battleships have continued to grow as expected in terms of numbers traded. During 2008, Ravens were traded through the market an average of 16,542 times per month. The least popular tier two battleship in terms of market trades was the Tempest, with a monthly average of only 2,362. 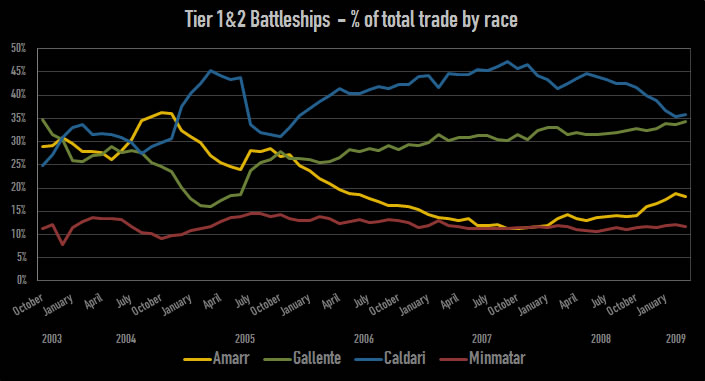 Regarding Minmatar, there doesn't seem to be any real consensus on why their battleships are the least popular. If you have any theories on why this is, feel free to discuss this in the comments thread. 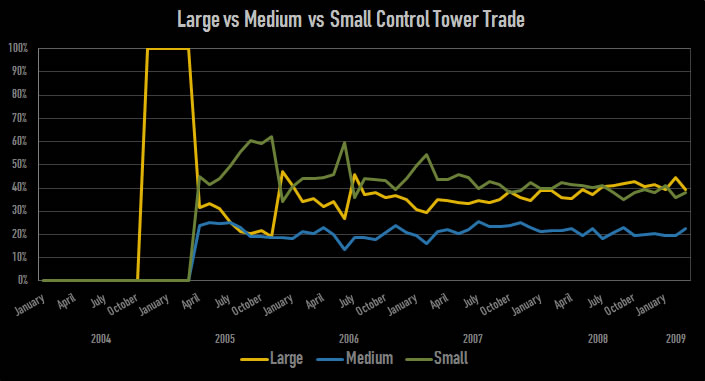 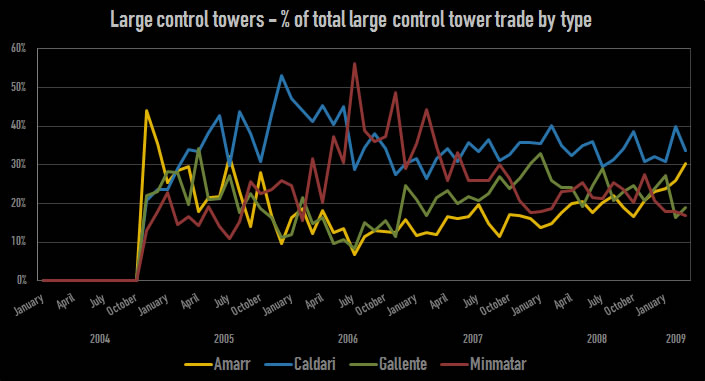 Taking a look at the racial comparisons for starbase towers, it can be seen that Caldari starbases have been the most popular most of the time. Minmatar starbases had a period of increased popularity from early 2006 to early 2007, which can be at least partially attributed to the primary choice of starbase type for alliances engaged in territorial warfare in that period. 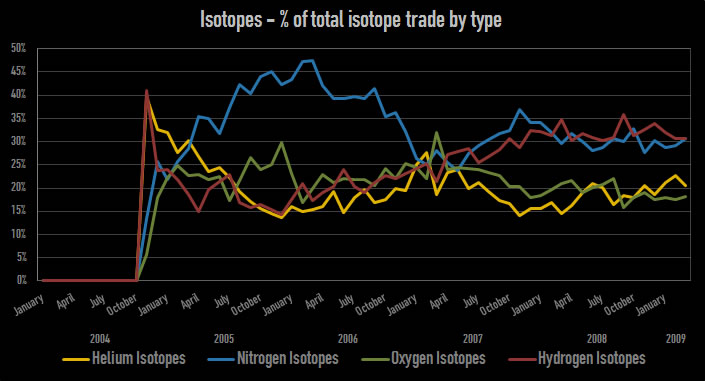 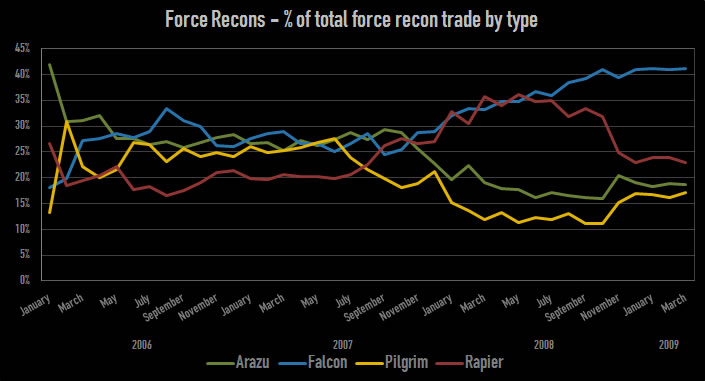 This graph has been cut down to show only from January 2006, as these ships were introduced during December 2005. Force Recon ships are very specialised and each have their own roles (such as ECM, warp disrupting or webifying). The comparative popularity of these ships for the first two years after their release was been surprisingly similar, likely due to each race having its own unique role. Since early 2008 though, we have seen two interesting events - the rise and fall of the Rapier, which lost a lot of popularity after a rebalancing of speed and stasis webifiers, and the rise of the Falcon to become the most popular by a very large margin. This can be attributed to its role as an ECM ship becoming increasingly popular in a variety of situations. 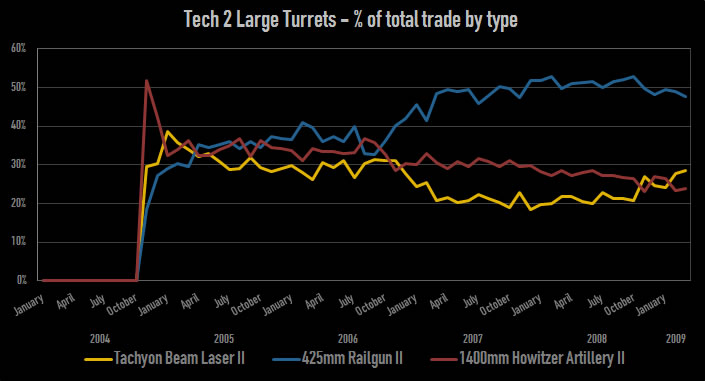 In this graph, the most used tech two large turrets of each weapon type are shown. With the introduction of the Rokh in Revelations II (November 28th, 2006), the market share of the 425mm Railgun increased drastically as this provided the Caldari with a battleship railgun platform. In line with the trends for Amarr battleships, the Tachyon Beam Laser has increased in popularity in recent months. This can be largely attributed to the changes to the Apocalypse in the Trinity 1.1 patch, which was released on March 12th, 2008. 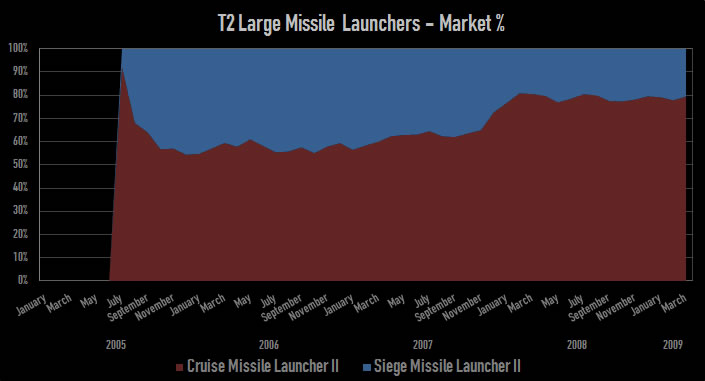 Tech two missile launchers were introduced in July 2005 as part of the Cold War expansion. In the Trinity expansion of December 2007 there were significant balancing changes to torpedoes to turn them into short range weapons, which led to a very significant reduction in their popularity when compared to cruise missiles.

So, that's it for now. We will be taking a look into some of the other requests there have been and will see what we can do regarding more graphs for you all, but no promises! As always, please give any suggestions for things you'd like to see on this front in the comments thread on the forums.