As part of our drive to overhaul and refresh the web presence of EVE Online, one of the combined objectives of the Community Team and Web Team here at CCP has been to replace the current EVE Online forums with a more modern, stable and versatile system that we can build on for years to come.

We’re happy to announce that after a long and gruelling process of deciding on new emojis, liberal testing, and many, many forum posts, we can now unveil the new EVE Online forums.

Before we get into the details, here’s a quick look at a visual comparison of old versus new, then we’ll talk about implementation, switchover, changes to moderation, and the future of the forums.

(this is not a forum for ants, click to enlarge)

So, what’s the goal?

Since April 2011, our forums have been based on software that has remained relatively unchanged and was heavily customised in house by CCP for it to be able to interface with Tranquility’s database. This direct tie to our infrastructure also means that whenever we suffered from server outages, sometimes we would lose access to the forums and must rely completely on third party services to keep the community informed about ongoing problems (notably @eve_status and @eveonline on Twitter).

The aim with these new forums is to vastly reduce the load they cause on our website infrastructure, and make the forum posting experience far more enjoyable for both players and developers alike. A by-product of this is we also have a solid medium through which to communicate in the event of any significant issues with Tranquilty.

The most important focus though is that we want to talk to you guys more, engage with you more, and gather feedback in a more clear and concise way. We also want to do this in a more open, candid and less restrictive environment.

The new forums will allow us to do that for many years to come, and it’s the intention for us to be significantly more active on the official forums going forward.

For many years, how we monitor and moderate and police the forums has remained the same. We now feel that the time has come for change.

For the launch of these new forums, we’ve undertaken a complete review of the forums rules and how we utilize and enforce our moderation policy, with a view to relaxing things and promoting more open and liberal discussion. To that end, the forum rules have been significantly simplified and condensed down from a total of 36 rules, to 9.

You can see the new forum rules here.

We've also initiated a complete amnesty on all forum bans, which means that everyone starts with a clean slate and can rejoin the conversation on the new forums.

Our moderation policy and our internal guidelines for warning and suspending those who do break the rules have also been refined to promote intervention and contact with those who’re treading the line, rather than taking immediate punitive action.

This means that if you’re treading the line but aren’t perceived to be deliberately and wantonly disregarding the forum rules, you’re far more likely to receive a private message on the forums from a member of the Community Team asking you to respect the rules and tone down your conduct rather than facing any punitive action.

Moderating the forums can be a tough challenge for both CCP and our army of fantastic volunteers in ISD CCL, as it can often be difficult to draw the line on disruptive behaviour, but we’re looking to establish a happy medium that promotes more healthy and candid discussion.

In addition to this, we’re looking to shift the role of our volunteer moderators from acting more as enforcers of the rules to being ambassadors to the community who can assist with responses to questions and issues, as well as providing a channel for feedback to CCP on common problems.

They’re based on Discourse, the same forum software used by our spacefaring brethren over on the EVE Valkyrie Forums, but with a few tweaks to give them more EVE specific backend features. This includes integration with our Single Sign-On (SSO) that preserves character association rather than having accounts be email based.

We know that when we first spoke of these new forums during the CSM Summit last year, the largest issue with them that was highlighted was lack of character association at the time. For us, there was no real compromise on this. Character identity is everything in EVE Online, and we decided to push back the release of the forums to make sure that this was part of the feature line-up.

Logging in is as simple as heading through SSO with an EVE Online account as you would do with any of our existing services, before you’re greeted by a character selection window: 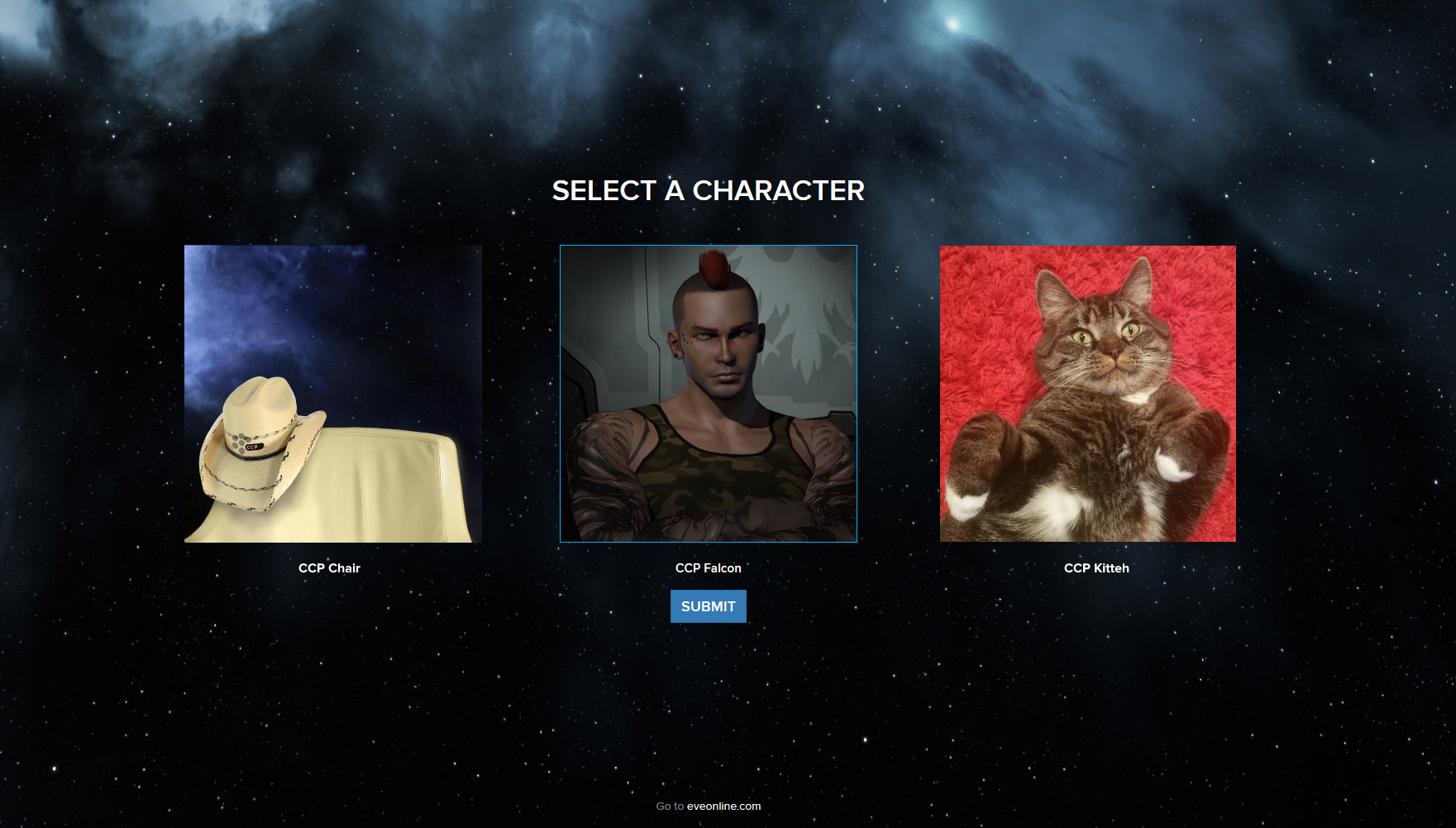 Hitting the submit button will then take you directly to the forums with the chosen character.

The only functionality we don’t have with the new forums is the ability to switch characters on a single EVE Online account on the fly. You’ll need to log out, then back in and select a different character to switch.

For some people who use all three character slots, this might be a little bit awkward, for most it just means that the risk of accidentally outing your alt-spy during a forum posting frenzy is less likely.

We may look at changing this in future, but at this stage it’s not on a roadmap to be considered.

Once you’re inside the new forums, the layout is like the old forums, with a little extra filtering:

Highlighted in green is a simple category that has just one forum section, all posts made here are displayed when you click on “New Citizens Q&A”

In addition to this, there’s some added functionality that we know forum users have wanted back for many years.

The ability to embed images, gifs, and videos into forum posts: 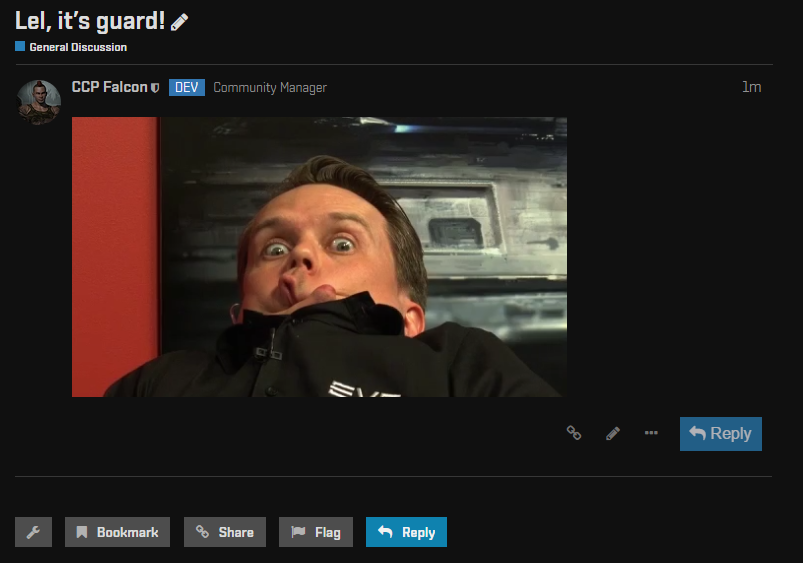 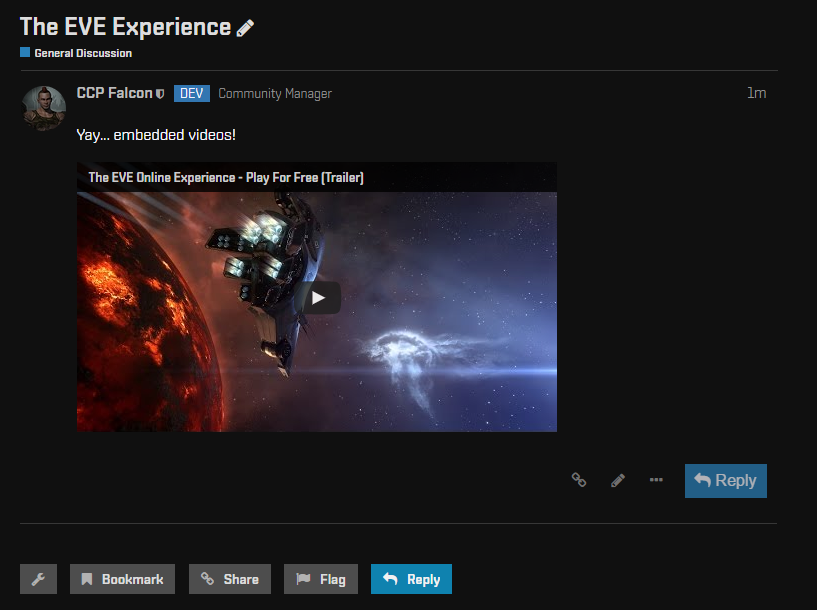 We’re acutely aware that this is a risky move given the creative nature of our pilots, however we’re willing to take a chance and re-introduce this feature.

Here at CCP, reaction to enabling the embedding of images, gifs and videos has varied between these two emotions over the last few weeks:

The moderation team are happy for this feature to be used for a little bit of fun memeing, for informational posts, and for some light-hearted fun with images and gifs.

We do however need to stress we’ve made direct mention in the new forum rules that use of this feature for any form of trolling, baiting, flaming or other nefarious purposes will result in reprimand. As will the posting of inappropriate content.

Please be sure to post responsibly. While the forum rules are being relaxed, reprimand for abusing this feature will be swift and harsh, and may include action taken against game accounts depending on the severity of the breach of the rules.

We want you guys to have fun, but we need you to keep it teen rated.

In addition to the return of image and video embedding, we’ve also added polling features to the forums for single choice, multiple choice and scale polling.

These are located under the settings wheel in the post formatting options when you’re composing a post: 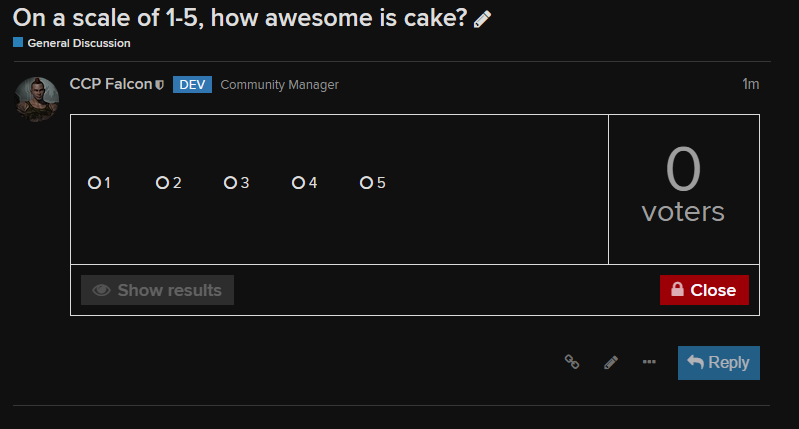 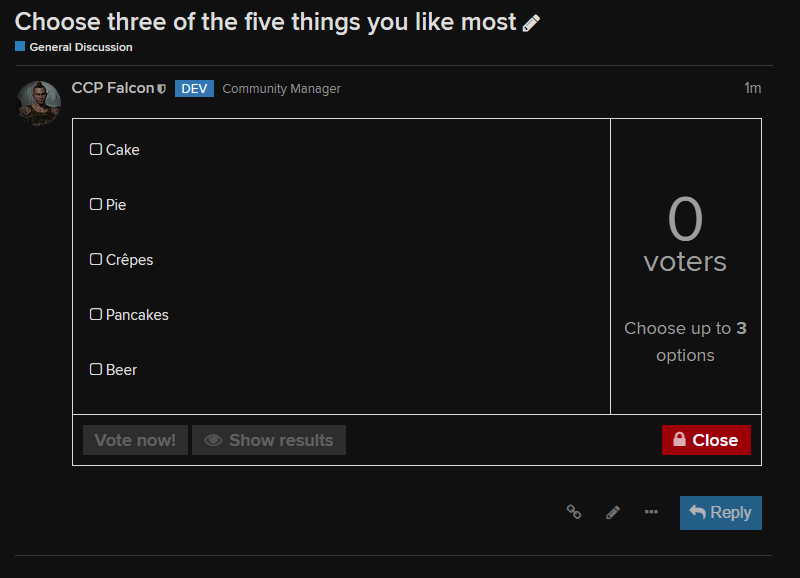 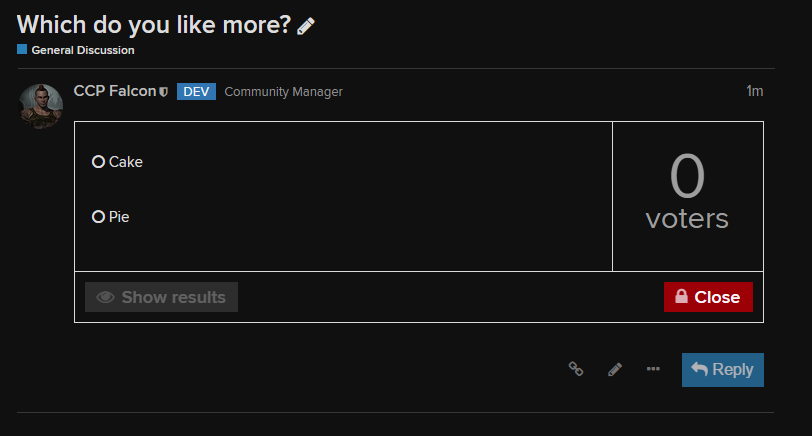 We hope that both players and developers alike will use these for all kinds of fun, however please also remember that this tool is offered under the same conditions as image and video embedding. Have fun with it, but keep it friendly!

You can find the new forums over at meta.eveonline.com.

They’re live, and ready for you to start using for EVE related discussion right now. Have a look at the new forum rules, and post away.

The comments thread for the new blog is also posted on the new forums too, as the first part of our transition to the new venue for discussion. As of this blog, all our new announcements and dev blogs threads, will occur via the new forums.

By the end of this week, CCP will fully transition to utilizing the new forums for all our official communications including balance threads, test server feedback, and all other manner of information.

We are of course aware that there are a lot of existing discussion ongoing on the existing forums, and as such we’ll be keeping them open for six weeks, until August 3rd, so that the community can make a solid transition over to the new forums too.

The new forums will live at meta.eveonline.com until this time, when they’ll move over to forums.eveonline.com.

What about the Character Bazaar?

It’s business as usual for sellers of characters on the character bazaar.

We’re aware that there are ongoing character sales in progress, these can complete via the existing forums, however any new character sales should happen on the new forums as of 00:00:00 UTC on Saturday, June 24th.

If new character sales threads are posted on the existing forums after this date, they’ll be closed, and sellers will be asked to migrate to using the Character Bazaar on the new forums.

The rules on the new Character Bazaar have also been clarified too, so please be aware of them before opening a character sales thread. The character bazaar is the most heavily moderated area of the forums given the fact that it involves the transfer of high value assets, so moderation there will continue to remain relatively tight to protect both buyers and sellers from scamming.

What about Corporation Forums?

Unfortunately, with the introduction of the new forums, there will be no support for individual corporation forums restricted to members of a given corp.

Part of the reason for the long transition period of one month is to make sure that those few groups who do utilize the corporation forums feature can ensure that they migrate any information stored on them away from the official forums to a third party service.

We’re expecting a lot of feedback on these new forums, and we’re aware that it’ll be both positive and negative.

Let’s be sure to keep the negative stuff constructive, so that we can make meaningful change as we go forward, wherever we see pain points.

We expect a lot of comments in the feedback thread for this blog and at the same time, we’ve set up a temporary space at the top of the new forums where you can discuss them, and give suggestions.

This section of the forums will be live through the transition period, before being archived on August 3rd.

We’re looking forward to many more years of forum warrioring with you guys, and hope that you’ll enjoy and utilize the new forums to their full potential with us.

On behalf of the Community Team,