MAKE SURE TO READ THE UPDATES IN APPENDICIES B AND C

We are about to make some significant changes to how long-distance travel in various forms works in EVE, with the aim of significantly increasing minimum travel times between two arbitrary distant points, most particularly in regards to jump drive and portal based movement. The overarching reason for this is that the current ease of movement has shrunk the practical dimensions of New Eden considerably, to the detriment of the game experience.

How do these changes fit into the Nullsec plan?

As we’ve previously discussed at Fanfest, in our recent forum post, and in the premiere episode of The o7 Show, a group of developers here at CCP has been working on Nullsec and associated game systems with the goal of releasing a series of changes to shake up the status quo and improve the overall state of Nullsec. We are planning to deploy changes over several phases, which will each provide specific improvements individually while also fitting into one greater whole.

Phase One contains the long-distance travel changes, as well as some other associated changes planned in Phoebe in November. These changes are not intended to be a silver bullet to fix all of Nullsec’s issues in one fell blow. Instead, they represent a significant improvement to specific areas of concern for Nullsec (and Lowsec) while also setting the stage for the later changes.

Phase Two is focused on medium-term changes to the ways that organizations capture and hold Nullsec space and infrastructure. We are working with the CSM as we firm up our plans for this phase and as we develop internal prototypes. It is during this phase that we expect to make greater progress towards smaller and more diverse Nullsec holdings. It is too early to go into great detail about what these changes will contain, but currently most of our conceptual prototyping has loosely fallen into categories that could be described as “occupancy-based” systems and more “freeform” systems that decentralize sov to focus more on control of the individual pieces of infrastructure. As we continue this investigation we will be working closely with the CSM and following all appropriate player feedback.

Phase Three is the stage that CCP Seagull discussed in the EVE Keynote at Fanfest this year. This stage is intended to build upon the changes that we are planning for starbases/structures and corps/alliances in 2015, changes that will open up new possibilities for more dynamic warfare and more granular control of territory. This phase is also intended to lead quite deliberately into the future through our vision for player-built stargates.

By splitting the task of improving Nullsec into manageable chunks, we are ensuring that we get you the best changes as quickly as possible rather than holding back needed updates. We’re happy to be getting the first significant chunk of these changes out to you all later this year.

We are going to allow capital ships to use gates in lowsec/nullsec, and we are aiming to make gate-to-gate travel take less time than jump travel over distances of more than ~20 LY. We've run simulations for capital ships travelling between arbitrary pairs of systems, and settled on the target movement speed of no less than 3 minutes per lightyear for travel over 20 LY. This should allow us to bring about the main change we want to see – less sustained use of jump travel – while still preserving its value for short bursts of movement.

How is this going to be achieved?

The primary change is the addition of a new mechanic, called "jump fatigue".

Jump fatigue is tracked for each character, persisting between play sessions and over downtimes as appropriate.

Every time you use any jump drive, jump bridge or jump portal (hereafter all treated as "a jump"; note that this does NOT include stargate travel!), you will accumulate jump fatigue. If your fatigue is below 1 before a jump, your fatigue will be 1 + (light years travelled) after the jump. For subsequent jumps, the fatigue is multiplied after each jump by 1 + (light years travelled). This stays on the character as mentioned earlier, and decays at a rate of 0.1 per minute.

After a jump is complete but before your fatigue is increased, you gain a jump cooldown timer. The length of this timer is a number of minutes equal to your jump fatigue (before being increased by that jump!), and you are unable to make another jump of any kind until this timer expires. Note importantly that, because fatigue decays at a slower rate than a cooldown timer, you will retain fatigue for a length of time after your cooldown timer expires. Additionally, there is a minimum jump cooldown of 1 + (light years travelled) minutes. (See Appendix A for examples.)

The status of both your fatigue and your cooldown timer will be displayed in the timer bar in the upper left corner of the screen: 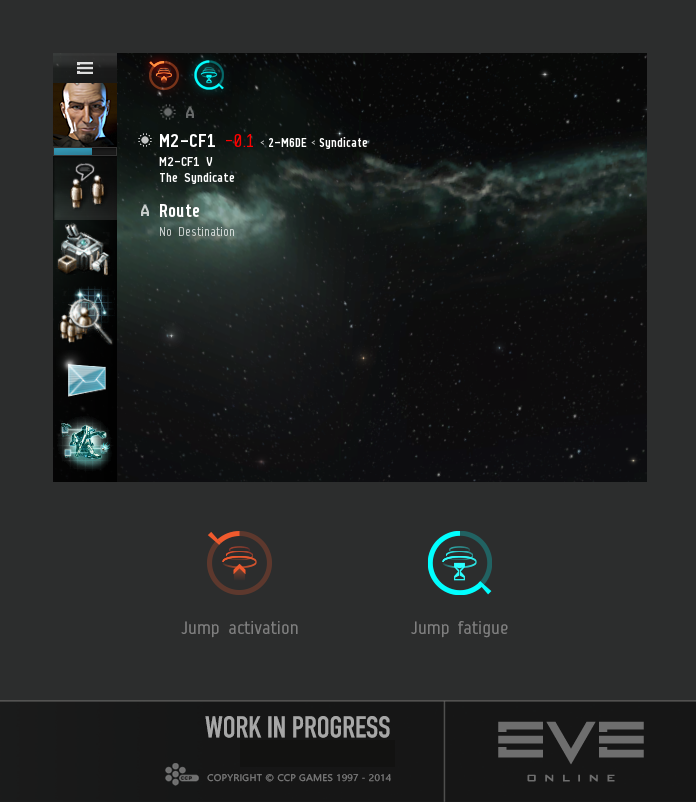 What are the anticipated consequences?

In the short term, we would anticipate a reduction in the degree to which the average non-trivial capital fight escalates, and the number of parties involved. This seems likely to increase the frequency of capitals being deployed in small-scale engagements, in both lowsec and nullsec.

Over the medium term, we see the potential for more substantial changes in the nullsec status quo as the various competing parties work to adjust their internal objectives to the new situation; it seems plausible that the general reduction in travel capabilities will lead to more localism, but we don't want to make any firm predictions in this area. We're confident that these changes improve the overall system of lowsec and nullsec gameplay and take them in better directions, but any set of changes that would allow us to accurately predict their consequences would by their nature be too simple to be interesting for very long.

**Update:** As mentioned above, we're taking feedback and responding in the thread, so look for those blue bars. Greyscale has also created a short FAQ that will be updated as needed as the first reply to the thread.

Little Bobby Tables is sitting in his Archon in UJY-HE in at the top of Deklein, just after the Oceanus release. He wants to travel to Atioth, at the bottom of Geminate, which is around 50 LY as the space-crow flies. He consults a popular jump planning service, which gives him a route of four jumps and 53 LY. He’s travel fit and has max skills, so his jump range is 14.625 LY and he’s expecting to be limited primarily by the session change timer. The journey takes him around two minutes.

A month or so later, he’s back in UJY-HE, and Phoebe has just shipped. His Archon’s jump range is now 5 LY. He consults his jump planner, and finds that his route is now 12 jumps and 54 LY. He hasn’t jumped anywhere since the release, so he has no jump fatigue.

His first jump, of 4.85 LY, takes him to U-TJ7Y. Because he has no fatigue before the jump, he gains a minimum-length jump cooldown timer: 1 minute, plus 4.85 minutes for the distance travelled, for a total of 5.85 minutes, or 5 minutes 51 seconds. He also gains a jump fatigue value of 5.85.

He waits for just under six minutes. In this time his jump fatigue decays down to 5.27. He then makes his next jump – 3.57 LY to LEK-N5. He gets a 5 minute 16 second jump cooldown timer, because his fatigue was 5.27 when he jumped, and his minimum timer would be 4 minutes 34 seconds based on range travelled. He then gets a fatigue increase after the jump. Because he travelled 3.57 LY, his fatigue is multiplied by 4.57, taking it up to 24.06.

After waiting for 23.5 minutes at the convenient local station, his fatigue is down to 119.79. He jumps again, to 2R-CRW – 4.9 LY. At this point his cooldown timer is 2 hours 2 minutes 8 seconds, and his fatigue is 706.74. At this point his total distance travelled is 17.51 LY, leaving him with 37.04 LY to go. He looks at his map, and finds a 40-route jump through nullsec to get to the same destination, and figuring two minutes per system, his warp travel time for the whole journey is a bit over half the cooldown for his next jump. He decides to fly there directly rather than trying to jump any further.

The next week, he finds he needs to take his Ark from HED-GP to 373Z-7, at the bottom of Stain. It’s been long enough that his fatigue has entirely decayed, so he’s starting fresh again. He plots the route, and sets off.

First jump takes him to 5-N2EY, 4.73 LY. Because his jump freighter counts distances as being 10% of their actual distance, he incurs a minimum timer of 1.47 minutes, or 88 seconds. His fatigue similarly becomes 1.47, dropping to 1.32 while he waits out the delay.

This continues until he reaches 373Z-7, with a total journey time of around 7.5 minutes, and a jump distance of 22.3 LY.

Can supercapital ships use gates after this change?

Does this make it too difficult for new pilots to get out into 0.0?

Yes, it probably does. Following further discussion after publishing this dev blog, we have come up with the following additional feature:

You may push a button in your corp interface (while a member of a player corp and docked) that:

The exact method of corporations designating the target station is still being ironed out, but it will involve at the very least being able to designate a default station for all corp members and will likely be allowed for any station with a corp office, regardless of system sec status. This seems to us like it solves the "I want to recruit people to Nullsec" concern, and also gives non-Nullsec recruiters an easier way to get genuinely new players to the right location quickly and easily.

Is the balance for Black Ops final?

No. Please give feedback!

Very large fatigue values will take a loooong time to decay, is this too much?

Possibly yes, we'll have a look at this.

Does a titan providing a bridge gain fatigue when people jump through it?

No. Only if the titan itself jumps.

Is the ability to push your fatigue up to really high numbers a good idea?

Probably not, no. We're looking at just capping fatigue at 1 month.

Conclusions we have reached through this exercise:

Therefore, changes we are making to the previously-announced plan:

For more details on these updates, please see this forum thread.