Mounts are coming to Incarna

Incarna is adding entirely new dimensions to EVE and bringing us closer to the full sci-fi simulation that CCP envisions. As we get closer to the full realization of Incarna, we're slowly revealing more of our roadmap to you, most recently with Captain's Quarters.

The next revelation is Incarna Mounts. That's right. It's finally going to happen. We've listened to your feedback and now we're going to give you what you've wanted for so long -- your very own pets in Incarna for your Captain's Quarters.

As capsuleers, we are these immortal gods. Our will lays waste to all we see before us and our ambition gives birth to empires. With all that power and majesty, it's all too easy to lose touch with our humanity. But even the coldest capsuleer heart warms at the sight of a purring little ball of fuzz meowing and clamoring for attention.

What Incarna home is complete without a fluffy little pet to greet you as you enter your Captain's Quarters? "NO HOME!" is our answer.

While we're referring to this feature as Incarna Mounts, there are actually two tiers what we will offer:

1. Smaller pets that will initially live in your Captain's Quarters. In time, we will allow them to venture out into stations with you, remaining within a certain user-defined radius of your avatar while you're out and about, with a chance-based risk that they will run away.

2. Larger pets which are true mounts, and can be ridden, raced, and used in combat scenarios in specialized station environments. Unlike pets, these mounts will have hitpoints and an array of combat or performance-centric enhancements swappable via a simplified fitting screen.

With the introduction of pets and mounts, players will also gain access to five new skills -- 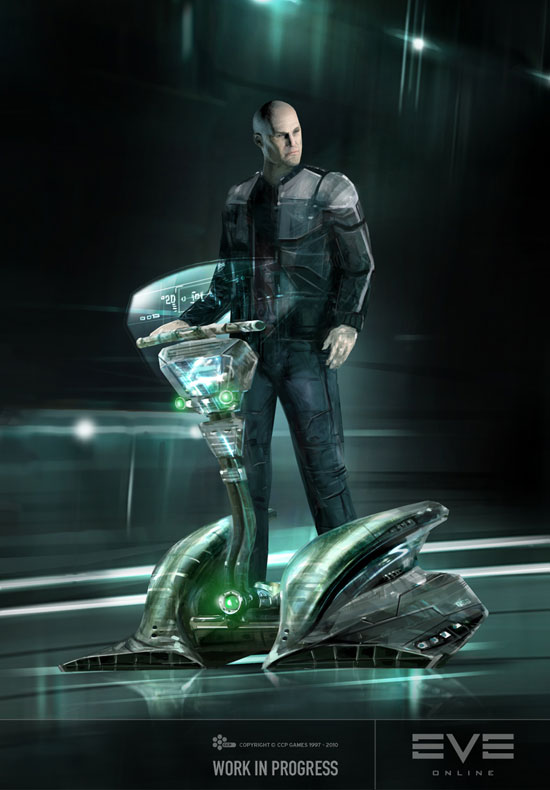 What about those capsuleers who don't want an animal skittering about their feet? Accompanying the introduction of Incarna Mounts is the Encasing system which will garb your pet or mount in a cold, metallic sheen.

Encasing allows for radical modification of the form and even the function of a pet or a mount. Perhaps the most demanded such function is the ability to be whisked around a station at high speeds. So how dramatic a change can you create?

Well let's take the example of those spongelike fedo constantly lumbering around your ship cleaning its interior. They're an eyesore. But with radical cybernetic augmentation built around two fedo humanely grafted together, you can get the job done in one-tenth of the time AND when the job's done, zip around the station in style. With fedo augmentation, you'll be the coolest Minmatar janitor in Amarr VIII (Oris) - Emperor Family Academy. Better living through science! But for the rest of you who don’t feel compelled to hide their animal affection, let's look at what Incarna Mounts will have to offer.

Imagine this -- you spend a long day oppressing your fellow capsuleers in space, or you've just lost your third officer fit Bhaalgorn in another 15 versus 1 engagement. (You'll kill 'em all next time amirite?) Sometimes, it's just time to dock up, kick up your feet and relax. Sure, you'll be able to visit an Establishment in Incarna and drink away your sorrows with some spiked Quafe or consume a fistful of boosters just because you can. But what about those nights when you just want to chill in your Captain's Quarters?

We've already discussed the character re-customization, market ticker, and news feeds accessible within your Captain's Quarters. But what about companionship? Especially of the legal and not by-the-hour variety? That's where your mount comes in.

Wait, no. Not like that. I mean that it's just cool to have a pet that greets you as you come home, with user-customizable sounds and pre-selected behaviors, like curling up in your lap when you sit down or performing simple tricks. That said, what happens in your CQ stays in your CQ.

So whether you've had a burning desire to make "fedo breeder" a new mini-profession in EVE or you want to alter a horse Equus-style, to have luminescent compound eyes, the pets and mounts we're introducing to Incarna should satisfy your urge to own and modify lower lifeforms.

The joys of pet ownership

Your real life pets and horses, mules, etc. can be messy. Why should virtual pets barf on your floor, need a litterbox, or otherwise be a complete pain in the ass? Incarna Mounts are meant to be fun, not a virtual burden.

However, we are offering some degree of realism through the game mechanics of pet and mount ownership. You'll need to keep up with feeding and giving them water, and giving them enough attention. The feeding expense of pets will be minimal, but a large and heavily gene-modified mount will require greater upkeep expense on the part of its owner.

Stay away from your pet or mount for too long and you'll return to station to find a decayed husk instead of little Fluffy. Likewise, ignore your pet for too long while in your CQ visits and it will begin to avoid you or even hide when you return home. Of course, no one is perfect and if you screw up as a pet or mount owner, you'll be able to take your animal friend to one of the many player-run veterinary Establishments in your home station. For the truly irresponsible, you'll be able to biomass and re-purchase new Incarna Mounts, but fines will apply in cases of excessive biomass reprocessing or repeated dissection.

One thing we were sensitive to is the fact that many EVE players will want to stage an impromptu rodeo in the corridors of stations or within the Establishments of their fellow capsuleers. This doesn't fit our vision of Incarna as a social space. So, with that in mind, we're going to introduce a new area within stations dedicated to all manner of fun with large animals, many of which would not fit into your Captain's Quarters in the first place. Or that you should probably not even admit to owning.

This is presently codenamed "Walking in Stables", but we will certainly change this name two or even three more times before giving it a final name. Whatever that final name will be, it will sound much cooler than the previous names and may even refer to some type of powerful spirit in White Wolf canon.

These new station interior environments are spacious -- more like hangars than a personal space, and will have very high ceilings as well massive doors that retract into thick walls. These "stables" will be communal places where mount races and even rodeos are held, and will also serve as arenas for combat and jousting tournaments.

In lore terms, these mounts are the freakier beasts that would claim the lives of many slaves to capture, embed control chips into, and transport. Given that EVE's backstory leaves little room for "aliens" and such, these mounts are all lower lifeforms that have adapted to their respective environments, or are standard beasts like livestock that have been modified into new forms. Quadrupled body mass, a carapace, horns and barbs, and so on.

Further specifics on the types of Incarna Mounts available will be made in dev blogs leading up to their release, as will the Achievement Matrix pictured below.

The future of Incarna Mounts

The first iteration of Incarna Mounts will introduce a basic selection of pets, plus the ability to name them. That name will be visible either on collars or via a scannable chip (which also lets you locate a mount that wanders off). Unlike character names, pet/mount names do not need to be unique. There can and likely will be hundreds of slaver hounds named Jamyl Sarum.

Call your Incarna Mount whatever you choose, as long as the name isn't somehow profane.

You will also have the ability to choose from a selection of pet sounds and alter their waveforms to get a unique sound. Essentially, it's voice distortion for pets and mounts. Over time, we will introduce more varied customization options, a wider menagerie of pets to choose from (including flying Incarna Mounts and those that can scale walls and ceilings), and new ways to acquire them. "PLEX for Ponies", another codename, will be re-named at some point and covered in a future dev blog.

Something we're also very excited about is the option to customize a pet or mount with cybernetic add-ons. These will add some utilitarian flare to Incarna Mounts, as well as some much-needed asymmetry if you're Caldari.

One thing that we're in the early stages of developing is a genetic modification system that will allow for designer pets. This will open up numerous possibilities for Incarna Mount owners. Simple alterations will let capsuleers own a pet with markings identical to its owner's tattoos or bear a corp/alliance logo like a mascot, or create a serpent with metallic-looking scales.

We will also enable more dramatic (and more costly) cross-species tampering... things so low on the morality scale that crowds of Amarrian scripture-thumpers will instinctively be drawn to your CQ door, calmly pointing out the error of your ways. With fire. What do you get when you cross a pitt bull with a spider and a wasp? I have no idea, but you'll be able to do it anyway and find out.

Future dev blogs on Incarna Mounts will introduce the Pet Upgrade Matrix, explore the intricacies of Mount Fitting, and mounting your mounts.

We hope you're as pleased as we are that Incarna Mounts are on the way. We're looking forward to your feedback in the discussion thread connected with this dev blog.

Also, free kittens for everyone.

Updated 2011.04.02: Yes, this blog was published on April 1 for a reason. We even got some of you and for the rest we hope this was a fun read. Please note that this update to the blog will make the publish date change, but for any doubters you can see it was in fact published on April 1. ;)