In the LAST BLOG, we explained the background for our current nullsec design efforts, and the high-level rules for all of nullsec. I'd recommend going back and reading that one first if you haven't already, as it lays the groundwork for this blog too.

The bulk of that blog was about defining things that should be true - in an ideal world - for everything that goes on in nullsec. That gives us a general framework to work within, but doesn't do a lot to explain where we're going with the different parts that make up nullsec today, and the things we'll be adding in the near future.

For this next bit, we had several brainstorming sessions, both internally and with the CSM, to define both what major areas of gameplay should exist in nullsec, and what the guiding principles for those individual areas or features should be. Again, we harvested the results, analyzed them, broke them down, built them up, and tried to pull them together into a unified vision of where we want to go. This all coalesced into a whiteboard covered in text, which I have reproduced below for your viewing pleasure. 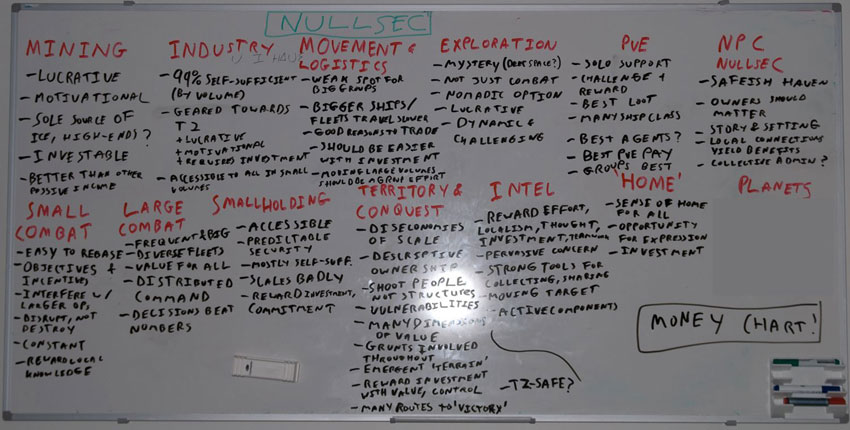 (You will note here that my handwriting is in fact not very good. Also, the "money chart" is a future thing we'd like to look at where we map out how much money you should be making in different areas of the game - that's just a reminder to make a note about it. You may also find that some stuff was changed/dropped/added/condensed in the post-whiteboard refinement stages. Also also, "U I HAVE" is in permanent marker and we haven't got round to cleaning it off yet. Also also also, the Planets stuff still needs finalizing so it's blanked out for now, sorry.)

We then moved this over to our internal wiki, fleshed out the various areas, and then tweaked and refined for a while to get it into a position where we were pretty comfortable with it.

Rather than trying to talk about this further, I'm just going to copypasta it in here so you can have a gander. Once again, please be very clear in your mind that this is where we want to go in the long term, and the caveats about how much we're likely to get done in five years etc still apply. Hopefully the amount of stuff in here will also make it clearer why we're saying "more than five years": for example, those few bullet points under "exploration" mean replacing all of the exploration content that's been developed in the past five years.

We are creating a separate feedback thread in the Feature and Ideas forum for each of these sections, which are linked from the headers here and again at the bottom of the page. Please take specific feedback for each section there - one comments thread can't carry twelve separate conversations like this!

As noted above, we want to move feedback into a bunch of separate threads, so we don't have twelve discussions in one thread. Here are the links again in one convenient place:

We're doing these blogs now so we can get as much clear, well-argued feedback as possible before we commit to anything. Please feed us back!

Also, to repeat a thing from earlier in big letters, THIS WILL ALL TAKE A LONG-ASS TIME TO HAPPEN. Some of it will be changed or dropped before it ever gets implemented. Some of it will never happen. This is a roadmap, not a production schedule.

-Greyscale, on behalf of Team BFF (WHO ARE CURRENTLY CCP AFFINITY, CCP FRELLICUS, CCP GREYSCALE, CCP SOUNDWAVE, CCP PUNKTURIS, CCP GILSEV, CCP BETTIK, CCP DROPBEAR AND CCP TALLEST, and who thank you for your time and consideration in this matter.)