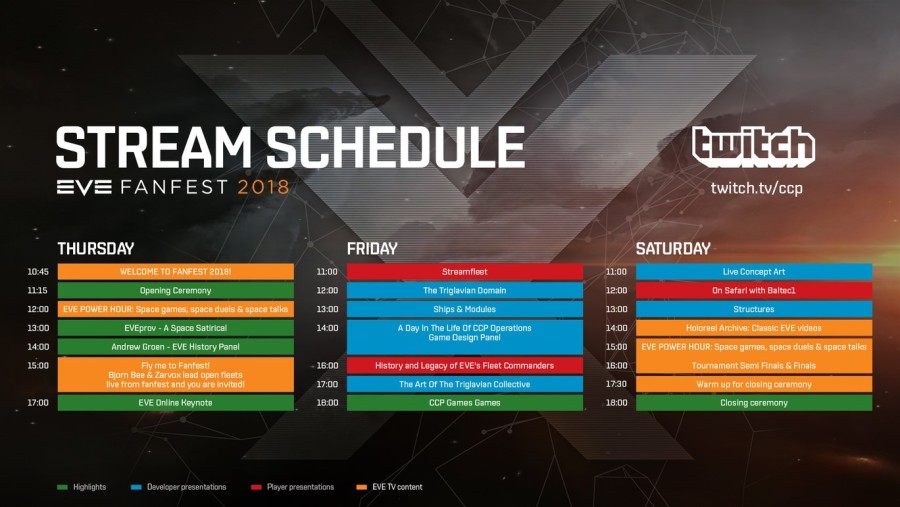 EVE Fanfest is kicking off tomorrow morning at 10:45 UTC (EVE time) and we're streaming all the major presentations and events on the CCP Twitch channel!

Throughout the broadcast we'll be giving away PLEX, ship skins and even physical prizes from our sponsors, NZXT and HyperX which we'll ship to lucky winners after Fanfest. We'll also be pitching space famous Fanfest guests against each other in exclusive matches specially designed for you guys watching from home. This year's hosting team, lead by four streamers from the EVE community, Manic Velocity, Zarvox, Rahne and Bjorn Bee will be joined by players and devs on set to deliver the Fanfest experience straight to your house!

Additionally we'll have Streamfleet streamers streaming on their own channels from the Fanfest halls, please find their schedule on Streamfleet.org.

The Fanfest tournament, The Caldari Corporation Cup which pitches teams of three against each other in pre-fitted ships, will be streamed whole on the Plus 10 Gaming Twitch channel, with finals also available on the CCP Channel. where we'll find out which Fanfest pilots take home GTX 1080 cards from Nvidia or Chroma Keyboards from Razer.

See you on the stream and don't forget to say hi in Twitch chat!