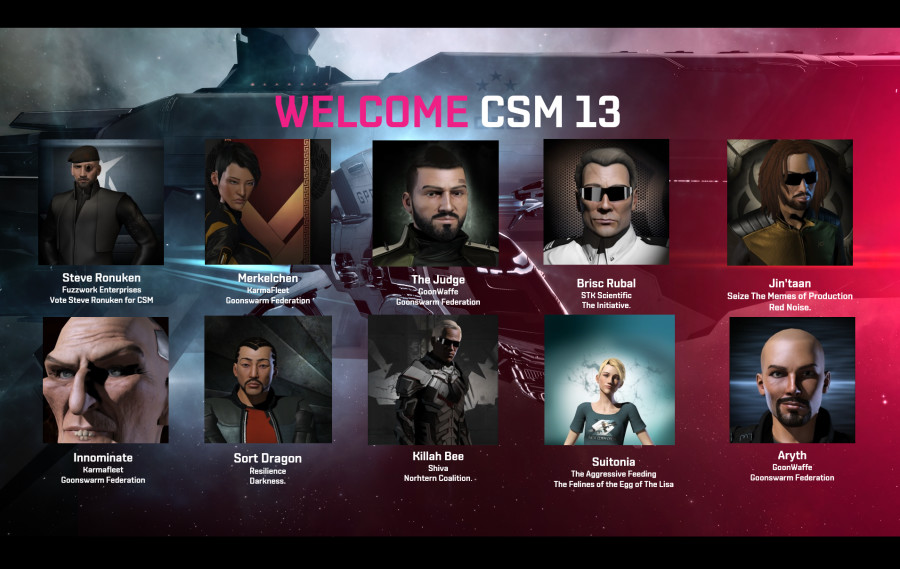 For those not familiar with the CSM, they are a player-elected representative body for the players to CCP. CSM members are involved in ongoing discussions with developers about the game and future changes being planned, bringing both community feedback and expert opinions. The council is also flown out to CCP Iceland twice a year for a multi-day summit with the development teams. To learn more about the CSM, head here.

Now lets take a closer look at the numbers...

Here are the votes and the python code to run them.

There are some irregularities that we want to explain to both save you time and ease worries.

Last night when we announced the results on Twitch we gave you the total number of unique votes cast which is 29417.

In the audit log which has the results of the vote calculation you'll see another number for total votes, 29226 which is 191 votes less.

190 of those were votes of voters who voted only for for Chreecher Virpio who was recently removed from the ballot. Those votes get eliminated out as they have nowhere to go. Everyone else who voted for him and had other choices behind him have their votes counted.

That leaves us with 1 missing vote and that was a single-candidate vote for a character that is not on the ballot. Candidates on the ballot of course shouldn't be able to end up in the votes database so we've investigated potential causes and the possibility of more malicious activity, and have found no reason to suspect anything else happened that affected the results of the safety of the election in any way. Only logged-in Omegas can generate valid votes and each account can only generate one vote.

Our suspicion right now is that someone found a way to edit the contents of their one vote, thus invalidating it.

Additionally, two multi-candidate votes were cast where one of the characters in that combination wasn't on the ballot either. In those cases the votes for the other candidates are counted as valid. We believe the cause is the same as the one above.

But we have a CSM and you have numbers to play with if you are so inclined. Have a great weekend and thank you for voting.

If you wish to comment you can do so in this thread.