In this blog I will explain the ins and outs of the new PI features, explain how a defect affected extraction negatively, and share some rules of thumb that will make your PI life easier.

As of Incursion 1.1.0 the planetary extractors became obsolete and were replaced by the new pinnacle of Planetary Industry: The Extractor Control Unit (ECU).

The ECU is, as the name suggests, a control device. It controls up to ten new extractor components called "extractor heads". The ECU does not extract anything on its own so you must construct at least one extractor head before any extraction can begin. The extractor heads are configured by the ECU, so you only have to set your preferences once. 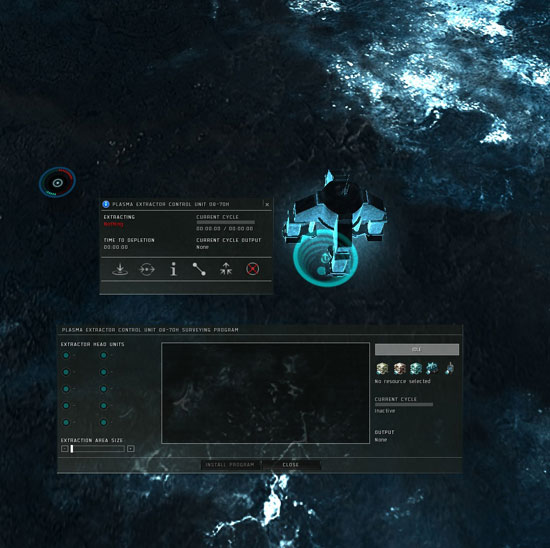 In addition to not requiring individual management, the extractor heads are also mobile within the ECU's operational range. Therefore, you can move the heads to the best resource spot before starting an extraction program. 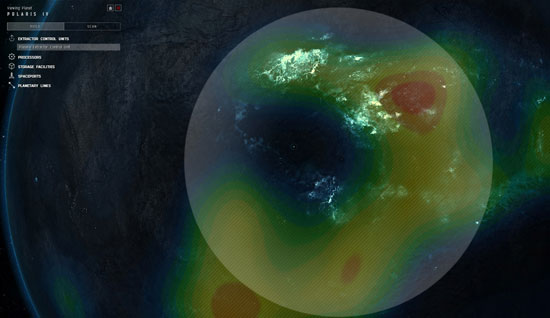 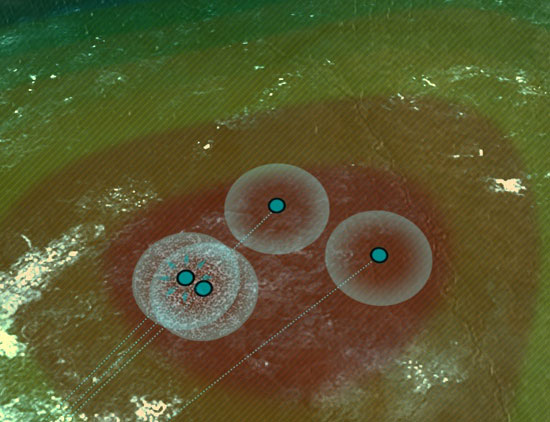 The ECU will provide information in real time of how all your settings will influence your extraction program. This is shown in the ECU graph. 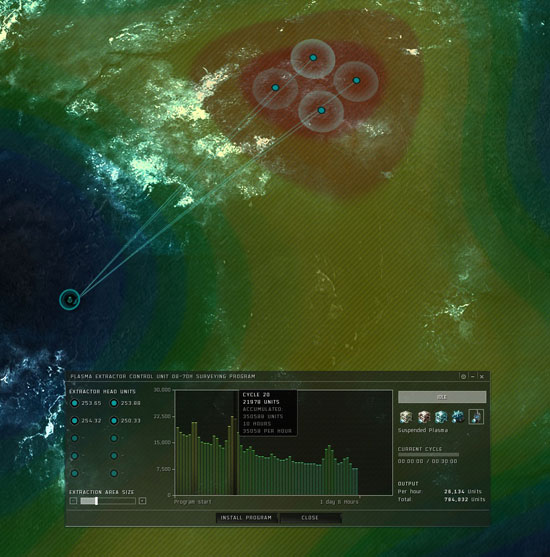 Understanding what the ECU represents might help you when using it. Think of the ECU as a resource pump which generates resources under pressure. The resource pressure depends on how much of the resource is available for the extractor heads to suck up. The pressure fluctuates over the lifetime of a resource extraction program, as you can see in the ECU graph.

By employing this ECU-to-Storage pattern, you can regulate the resource pressure and ensure that you neither starve your processors nor lose resources to overload during spikes in the ECU's output.

Below are a few good rules of thumb:

When the PI changes were launched and tested properly on Singularity, we discovered a few defects that impacted the gameplay and resource management we had designed.

One particularly nasty bug was actually diminishing the extracted amount of resources quite substantially, especially in long extraction programs. This made it feel as if we had severely tuned down the amount of resources you could get from ECUs. This global blanket reduction was not intended and Thursday's patch (1.1.2) fixed this.

While working on the fix, our engineers discovered an underlying issue in the entire routing system of Planetary Interaction. I will try to explain the concrete outcome of what was discovered and how it affects you.

How to avoid routing trouble

With the fix that we are deploying, the unintentional restriction to the maximum output routed is removed, so what you are promised by the survey window is actually what you get. Due to the dynamic nature of the output of the ECUs, and the static nature of routes, the number shown under the products tab is a theoretical maximum one could output from a program (given the raw output of its extractor heads) and is always higher than what a single cycle of the program will output. Although slightly confusing, this guarantees that you will always be able to route every single unit produced by your ECU. 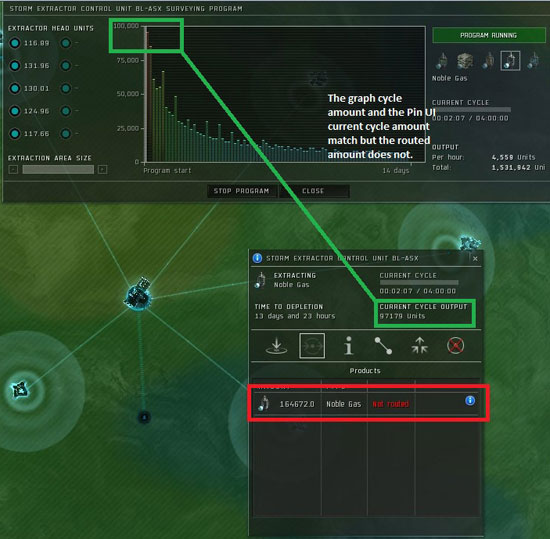 The resources are alive!

With Incursion 1.1.0 we finally rolled out resource depletion and resource nuggets. These features were always planned to be part of PI but didn't make it into the Tyrannis release in a meaningful way due to time constraints.

The system is designed to make the resources more mobile on the planet but without being totally random. The geography of planets is still the single most influential contributor to resource density but, with depletion, the second best spot can become the best spot once the best spot has been exploited. Depleted resources regenerate so moving extractor heads off a hotspot will allow it to grow back. It is also possible to achieve equilibrium with the resource by extracting at the same pace as it regenerates - this is achievable only by carefully tuning and monitoring the hot spot you are on to make sure it doesn't lose strength.

Another addition to the resource distribution is nuggets. The nuggets have a more random nature than the basic resource calculation and were introduced to counter the effects of increased depletion. It is now worthwhile to scan your planet every once in a while to exploit any nuggets that might have appeared.

The resource calculation is additive so you will only ever see one cohesive resource layer when you scan, but this layer is now much less static due to the nuggets and depletion.

One of the main flaws with the first iteration of Planetary Interaction was the lack of upgradable command centers. As of Incursion 1.1.0, you can now upgrade command centers on the spot. Upgrading your command centers bears an ISK cost and you can only upgrade to the level you have the appropriate skill for. 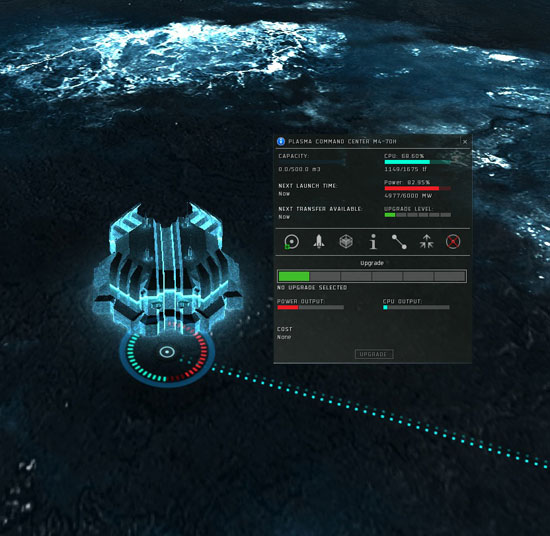 The first step in adopting the new system is to use the "Decommission" button on your old extractors as soon as they have completed any ongoing extraction. When you decommission you will be reimbursed the same amount that the extractor had cost you when you first built it. 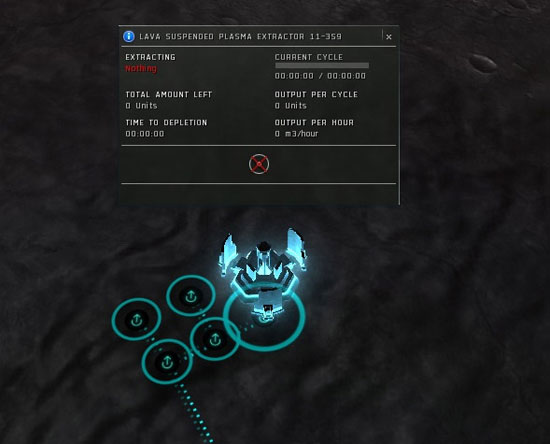 When the old extractors are gone, you will need to build an Extractor Control Unit (ECU). You will be able to extract one resource per ECU using multiple Extractor Heads, up to a maximum of 10, in the vicinity of the parent ECU. Therefore, you will want to make sure you place your ECU in such a fashion that its range covers the relevant resource hotspot. You will see the ECU's range when you have bought it from the build menu and are deciding where to place it.

When you have placed the ECU so that the relevant resource is in range, you move on to configuring the ECU. To do this, click on the ECU and then on the "Survey" button; alternately, simply double-click on the ECU.

When the resource is set, you should add as many extractor heads as you intend to use. Remember that they cost Power and CPU. You add extractor heads by clicking the empty slots in the left pane of the survey window. It does not matter which slot you choose. The extractor heads appear close by your ECU and you may move them on to the resource hot spot as long as the ECU is idle.

The most visible difference in the Incursion 1.1.0 version of Planetary Interaction is the ECU graph. It replaces the deposits that were previously visible on the Survey window.

The Graph provides information on the resource yield per cycle over the entire length of the extraction program. It's worth noting that the cycle's length increases in longer programs. To get more information you can hover your mouse over every individual cycle in the graph.

A summary of the total extraction program is available in the bottom right corner of the window. Make sure to keep an eye on this as you move your extractor heads to their optimal position.

Once you have selected a resource to extract, the desired amount of extractor heads and the correct program length you may submit the program to the ECU. The ECU won't extract anything until you submit the program (and remember to submit your changes above the build menu).

When a program is running you will be unable to make any changes to the ECU, in order to make changes you need to stop the program. Don't hesitate to stop a program in order to submit a new one; this is a perfectly viable strategy to optimize your extraction output. Be careful not to stop the ECU's programs too often as this will put the ECU into cool-down mode, which will prevent you from stopping the program for a period of time.

As a program is running, you can see a line indicating where in the ECU currently is in the program. A good time to stop and re-submit a program is when the progress line has moved past the main spikes in the graph. The main yield is often located in the first days of a program.

6. Routing from the ECU