PLEX Changes On The Way!

Team Size Matters here to tell you about some changes we have lined up for PLEX, Aurum and the New Eden Store. These changes don’t have a set release date yet but will be coming to EVE Online this spring or early summer.

With Ascension behind us, and a wave of Alphas now living as permanent residents in New Eden, our team has been looking for ways to improve the PLEX experience for Alphas and Omegas both. PLEX (Pilot’s License Extension) has been an important part of the EVE ecosystem for many years now. It’s been great for EVE because it allows players to trade their time and money in whatever way they like without hurting the integrity of our shared universe. Over those many years, and especially now due to Clone States, we’ve learned a lot about PLEX and think we can make improvements without disrupting the core design. Let me tell you how!

The first component of our plan is focused on making PLEX more flexible. Currently, PLEX is rather large. By always existing as a one-month chunk of subscription time, PLEX can be cumbersome to buy and trade. We think it would be great if it could be broken into smaller units that fit your needs rather than always being bound to the size of 30 days. With that in mind, our first planned change is to convert every existing PLEX into 500 PLEX. After the change, anything you could get for 1 Plex from CCP will instead require 500 Plex. This new PLEX granularity will allow us to sell smaller PLEX packages, and allow you to trade whatever amounts you like with each other.

We also want PLEX to be easier to find and understand. To make it easier for players to find out what PLEX is and what it can do, we are introducing the PLEX Vault. The Vault is an inventory location, shared across all characters on an account, that stores PLEX and shows common actions you can take with it, as well as how you can get it.

Like any other inventory location, the Vault will appear in the list of locations to the left and you can drag PLEX in and out of the Vault to any other inventory you have access to. PLEX is the only item that can be kept in the Vault. When you purchase PLEX from CCP, it will go straight to your PLEX Vault instead of the Redeem queue.

It will look something like this (work in progress): 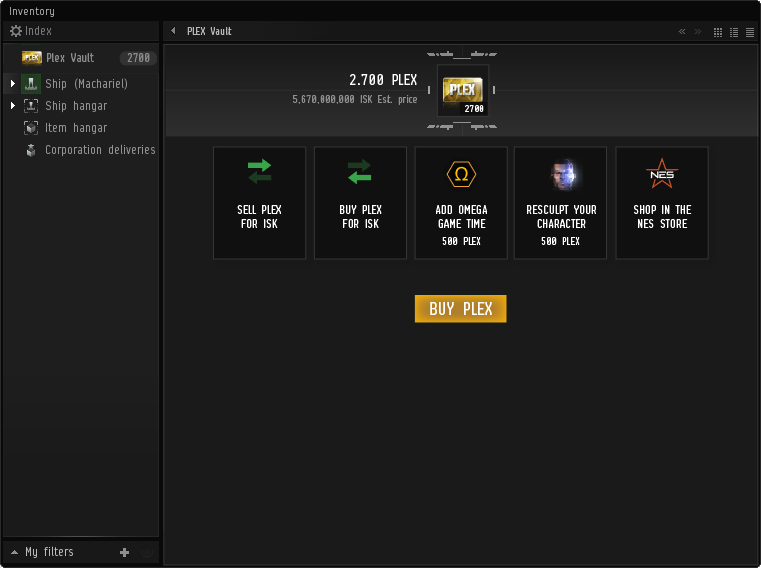 The PLEX Vault will allow you to move PLEX safely throughout the universe rather than having to move it in a ship. It will still be possible to carry it in a ship like any other item if you want, so if you have an urge to fill a shuttle full of PLEX and tour low sec just drag PLEX out of the vault and into your cargo and you’re good to go.

We know how much you love it when ships blow up with piles of PLEX inside, we even might understand why, but, we also don’t want new PLEX users to be losing their PLEX before they can trade it because they didn’t know how to get to market safely.

With a much smaller PLEX, we can easily set up the New Eden Store catalog in PLEX prices rather than Aurum and let you use PLEX from your vault to buy things there. The coexistence of PLEX and Aurum has always been a heavy burden on anyone who wanted to buy something from CCP. Whether you just wanted a SKIN or you wanted to buy the smartest item to trade with other players to get ISK, you had some math to do. With Aurum out of the picture and PLEX taking over in the NES, buying should be much less confusing.

Aurum had its run but we are excited to move forward with PLEX only. On launch day for this feature we will convert all existing Aurum balances above 1000 Aurum to the new PLEX. Today you get 3500 AUR for every PLEX you convert to Aurum, and this is the same rate we will match to convert Aurum to the new PLEX. This means that if your Aurum balance on launch day is 1000 Aurum or more, it will be converted in its entirety and you will get 1 PLEX for every 7 Aurum.

A word on the PLEX market

One consequence of making the changes described above is that we are combining the existing stockpiles of Aurum and PLEX, which could affect the value of PLEX in the EVE market as new supply enters. Even though we believe this set of changes will be extremely positive, we very much want to protect the value of PLEX that you currently own. Here’s a small list of information and plans to protect the PLEX market:

We will keep a careful eye on things and be ready to intervene in other ways if necessary to protect the PLEX ecosystem and your investments in it.

With these changes, we hope to keep everything that works about PLEX intact while greatly improving clarity and usability. More details will emerge over coming months as we take on feedback and continue to nail down specifics. We’ve included a Q and A below to try and address some common questions, let us know if we miss anything!

Q: When will this feature launch?
A: We don’t have an exact date yet, but this feature is in active development now, and you can expect more detailed information on the launch timeline at EVE Fanfest in early April.

Q: What will happen to existing market orders for PLEX when the feature launches?
A: We will cancel all orders and repay fees, as usual when we make a major type conversion.

Q: Will market histories reflect the change in PLEX value?
A: New PLEX will be a new item type, getting its own graphs and history data starting from day one and leaving old PLEX data unaffected.

Q: Can I still buy Aurum?
A: Yes! All current Aurum packages will be available until near launch of these changes, after which we will close Aurum purchasing completely.

Q: Why are you only converting Aurum balances above 1000?
A: A large portion of the total Aurum stockpile is in small balances left over from past giveaways and by not converting those small balances we mitigate risk of oversupply in the PLEX market

Q: Will prices change in the New Eden Store?
A: Prices may change after the conversion from Aurum to PLEX as not all prices will be possible to convert at even numbers. Overall this change to PLEX is not made with the intention to change the price of products such as Skill Extractors in the New Eden Store, and we will define new pricing in PLEX to match the current pricing in Aurum.

Q: With smaller PLEX, will I be able to buy less than 30 days of Omega time?
A: We currently we have no plans regarding smaller game time packages.