Hello Capsuleers, CCP Falcon here on behalf of the PLEX for GOOD Taskforce!

On Saturday April 25th 2015 a massive earthquake measuring 7.8 in magnitude struck Nepal and the surrounding region, swiftly followed by an aftershock measuring 6.6, then a second measured at 6.7 less than 24 hours later.

These initial earthquakes, along with a second 7.3 magnitude earthquake that occurred two weeks later on May 12th have caused unprecedented destruction across the region, levelling homes, destroying businesses, and reducing national monuments and sites of cultural and historical importance that have stood for thousands of years to rubble.

With around 8,800 lives lost and more than 23,000 more people injured, the reaction from the EVE community once again left us speechless, with countless players calling for CCP to host a PLEX for GOOD drive.

On Friday, May 1st 2015 we opened up donations for PLEX for GOOD – Nepal Earthquake Relief in association with our partners at the Icelandic Red Cross, allowing players to donate PLEX in order to assist with their relief effort in Nepal.

Throughout the drive we maintained contact with our partners at the Icelandic Red Cross to keep them up to date on the fundraising efforts of the EVE community and like us, they were astonished as the total amount donated by EVE players continued to climb, with many other companies across Iceland donating to relief organizations in order to assist.

On Monday, May 25th the Community Team had the pleasure of tallying the final donation total, and here are the results: 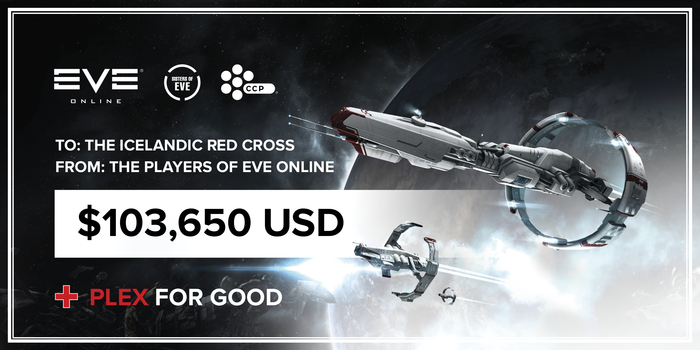 A total of $103,650 US was raised by the players of EVE Online for PLEX for GOOD this time around, this equates to:

This includes a $500 donation from our wonderful ISD Volunteers, as well as a donation of 365 PLEX from the PLEX for GOOD Item Auction.

In terms of donations, this is the second largest PLEX for GOOD drive that we’ve ever hosted on behalf of our community, and this brings the total that EVE players have raised for charity to almost half a million US Dollars:

This is an astonishing feat for a community the size of ours, and really shows that while EVE players may explore the in game limits of morality while they play, our amazing community has once again demonstrated its immense collective strength and capability as a force for good.

There have been some amazing stories that came out of PLEX for GOOD this time around, including an unfortunate player who was scammed out of a number of PLEX which were then directly donated to the PLEX for GOOD fund less than 10 minutes later by an individual who can only be described as the interstellar equivalent of Robin Hood.

PLEX for GOOD “Bit By Bit” hosted by Chribba has also raised an amazing amount of donations once again as a program which puts aside small amounts of ISK from individual contributors, which is then pooled to purchase PLEX as donations to PLEX for GOOD.

This in itself is an immense contribution, however when we looked at this donation further and came to the realization this this player is from the Philippines, which were assisted by our last PLEX for GOOD drive after the terrible impact of Typhoon Haiyan, it became an incredibly heartwarming story of giving something back.

Today we had the pleasure of welcoming representatives of the Icelandic Red Cross, as well as the President of Iceland to CCP Headquarters in order to hand them a check for $103,650 on behalf of the players of EVE Online: 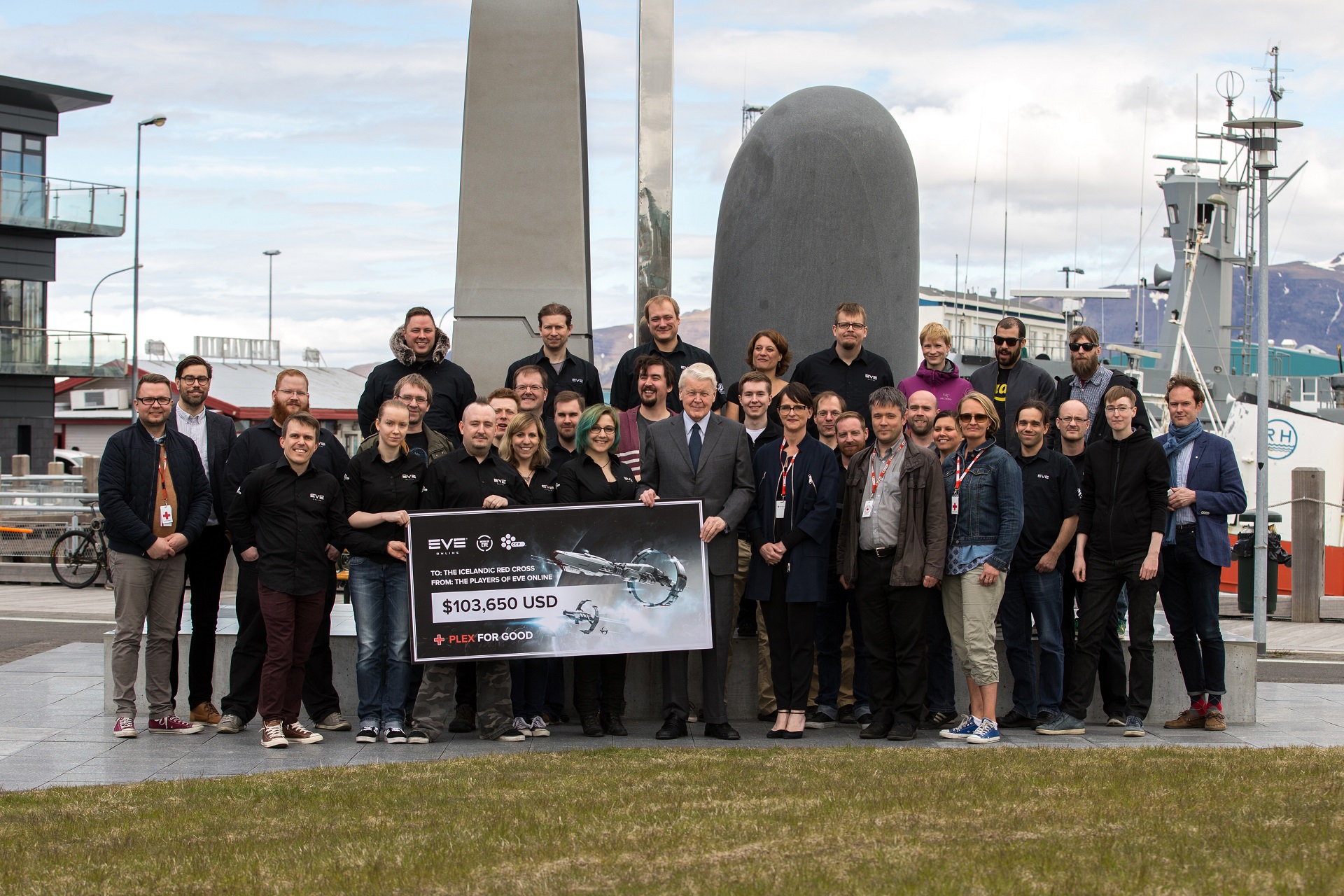 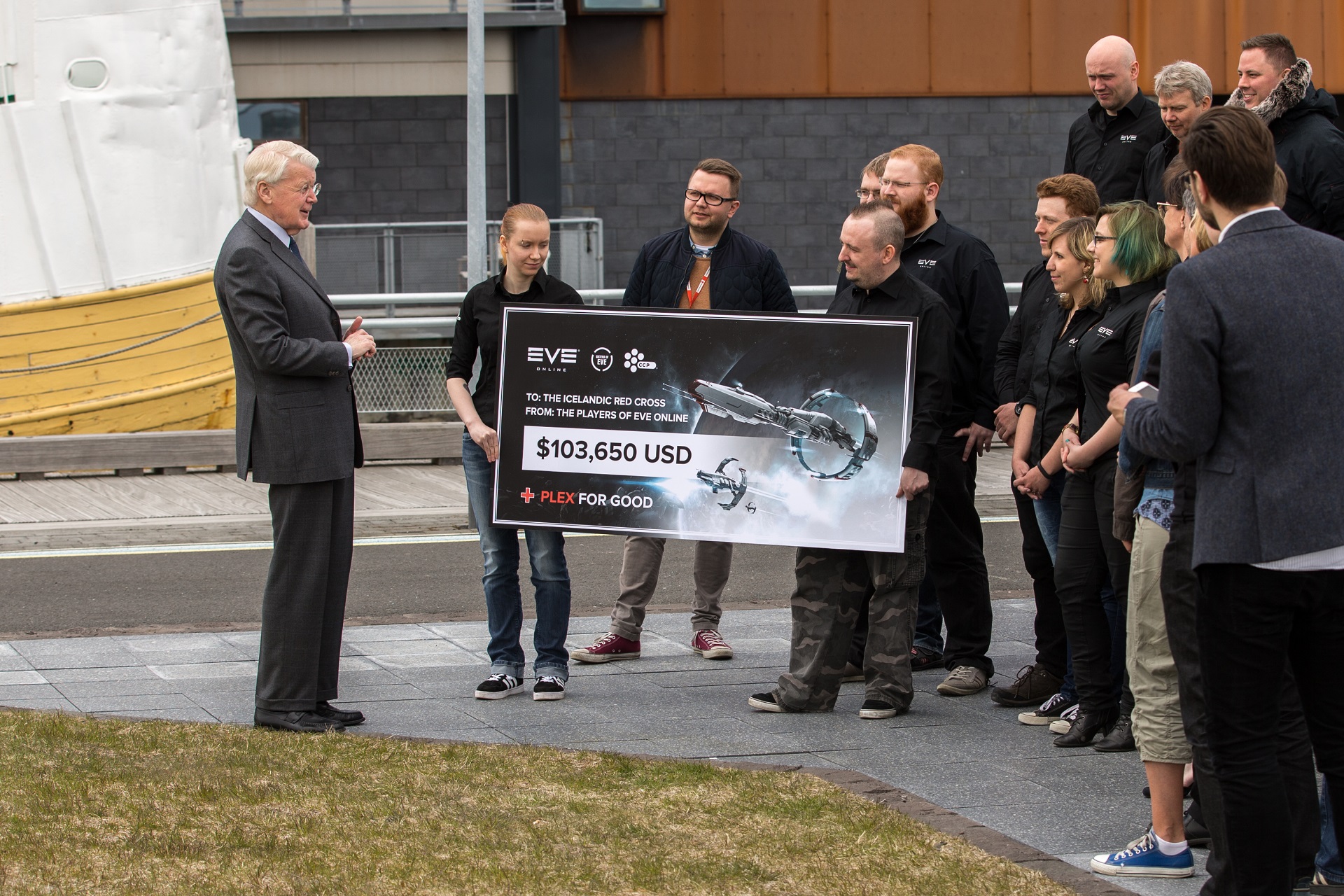 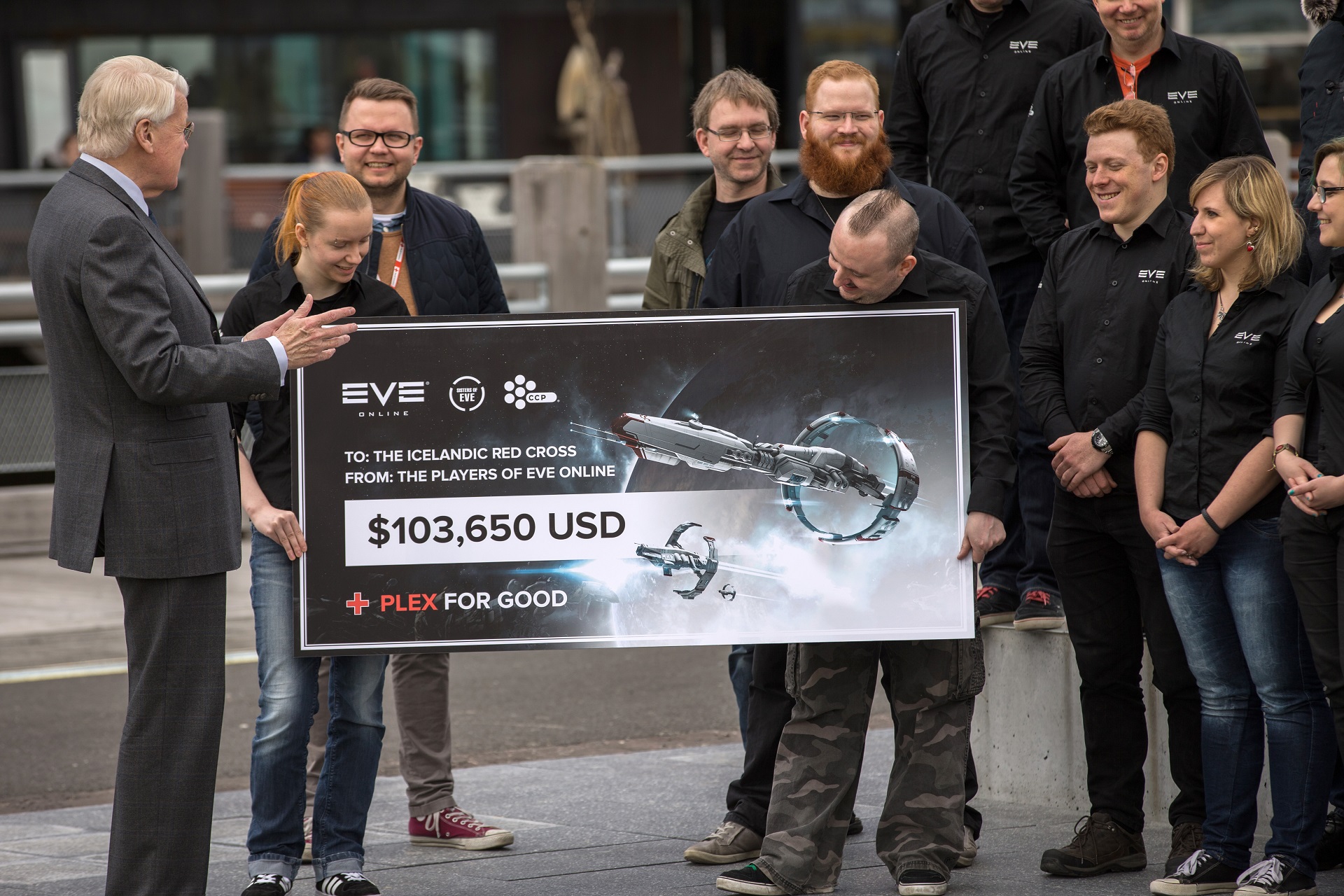 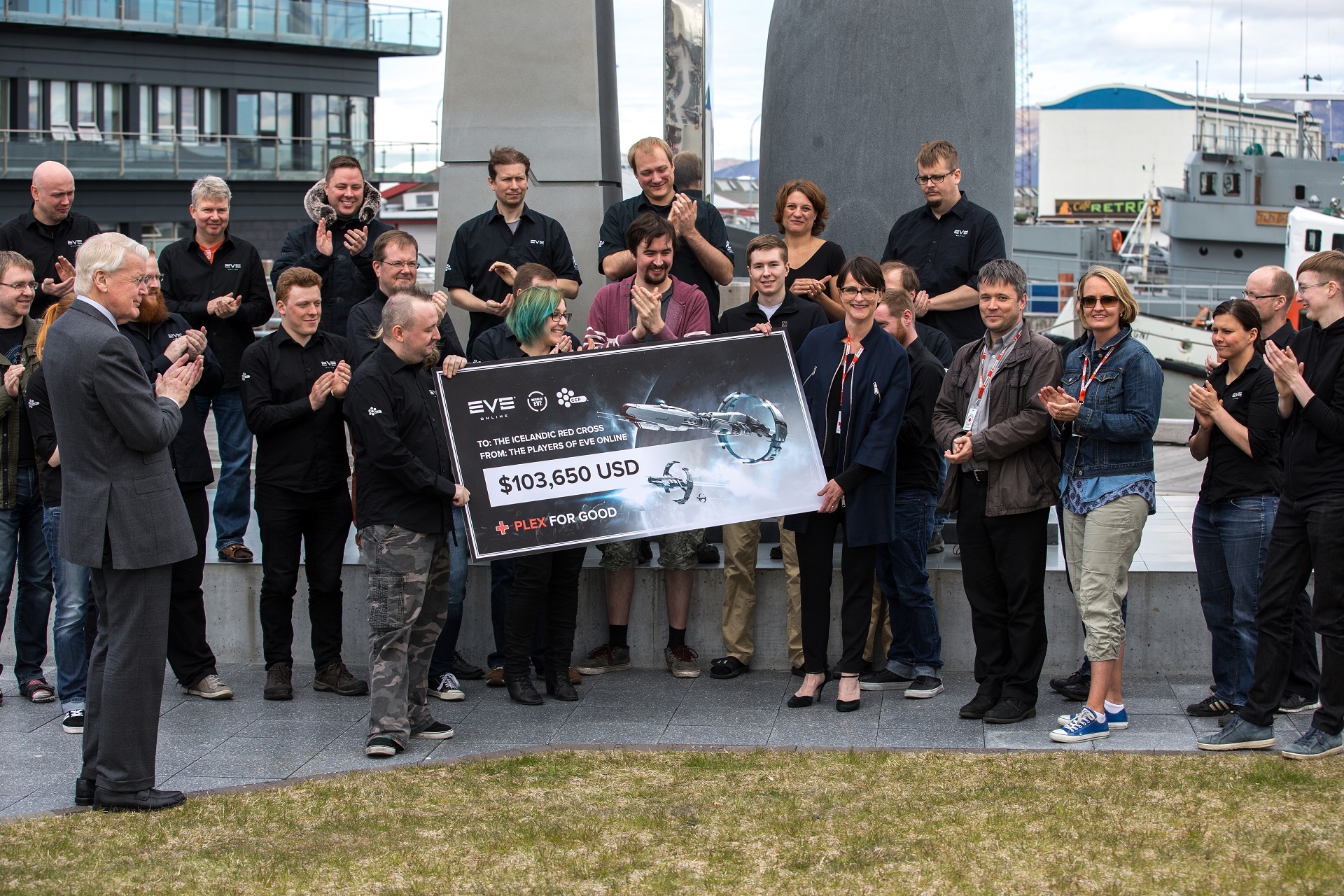 Both the Icelandic Red Cross and the President wish to express their most profound thanks to our community for the incredible generosity that has been shown. The President also remarked that the EVE community is a shining example of multi-national crowdsourced fundraising for charity, and that more games companies and online communities should follow the example set by the PLEX for GOOD program in order to assist their fundraising efforts.

Once again, here at CCP we are finding it very difficult to choose words that express our gratitude to the EVE Community for the incredible generosity you have all shown over the course of this fundraiser. The Community Team does however have an amazing display on the windows of our office as a constant reminder of the fact that we serve what is, without a doubt, the finest gaming community on Earth. 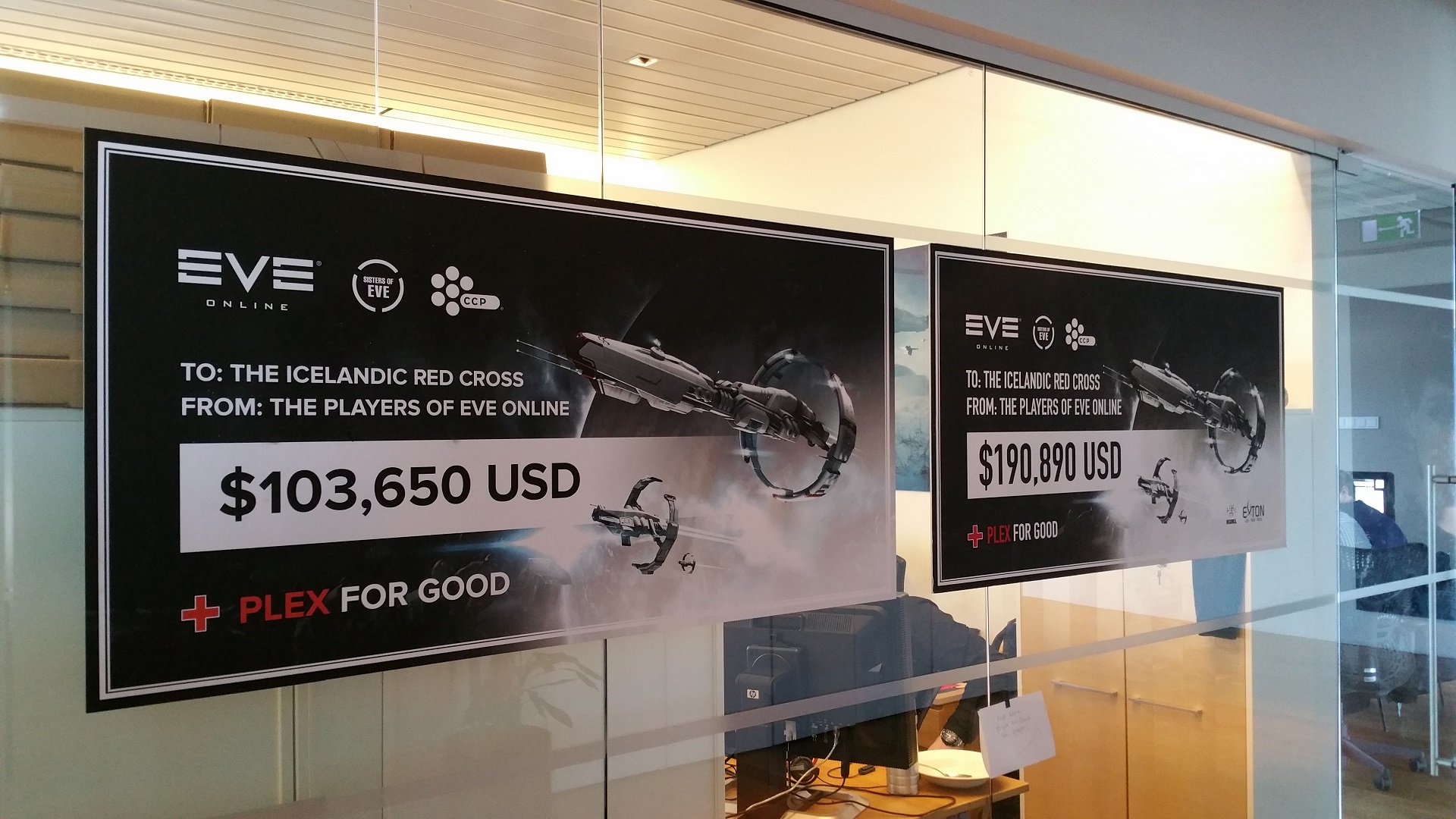 From everyone here at CCP Games, we offer our most sincere thanks and profound gratitude for the astonishing level of support you all show for PLEX for good.