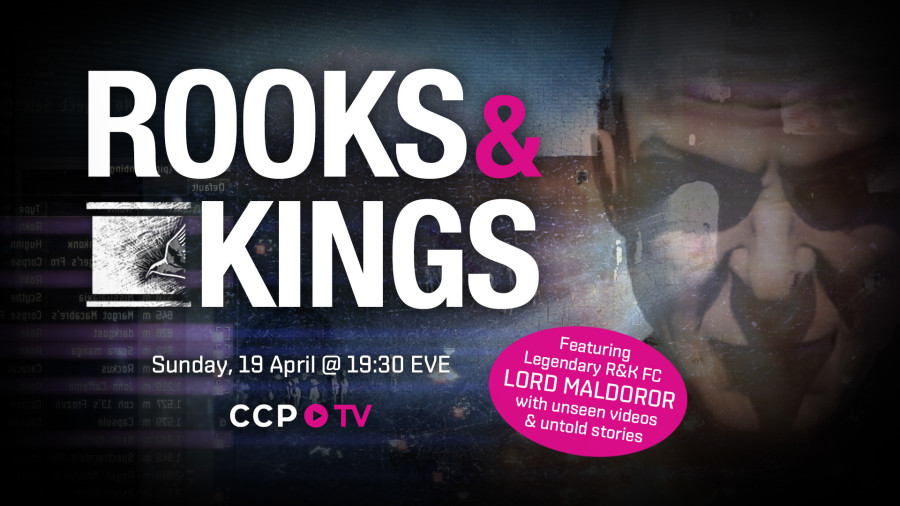 After a short break we're coming back this weekend with another Sunday stream for your enjoyment! This will be the third such stream we've hosted on CCP's Twitch channel following on from the very successful Clear Skies marathon with series creator Ian Chisholm and the EVE cinematic retrospective with EVE Cinematic Lead CCP Zond 3.

Once again we have another very special guest for you - one of the most storied and (in)famous figures to ever emerge from New Eden - Lord Maldoror from Rooks and Kings.

Rooks and Kings became legendary for their innovative theorycrafting, brilliant mechanical execution and the amazing videos produced and narrated by Lord Maldoror which lionised their exploits. Many of the combat techniques pioneered by Rooks and Kings found their way into the permanent meta of EVE Online, and the terms they coined are now a part of every EVE player's vocabulary. Their influence on the game cannot be overstated.

Perhaps best known for the Clarion Call series, Rooks and Kings has also released many other classic videos such as Anatomy of a Fight, Iron Clad and The False Tower. They also featured prominently in the famous This is EVE trailer which showcased their notorious pipebomb traps.

Although there is enough existing Rooks and Kings material to run several streams - and we will be showing some of their most popular videos - I'm excited to let you know that Lord Maldoror has been digging through his archives and has uncovered a significant amount of never-before-seen Rooks and Kings material. I've had a preview of some of it and I think you will like what you see!

During the stream Lord Maldoror will also be sharing his anecdotes and knowledge as he pulls back the veil on Rooks and Kings.