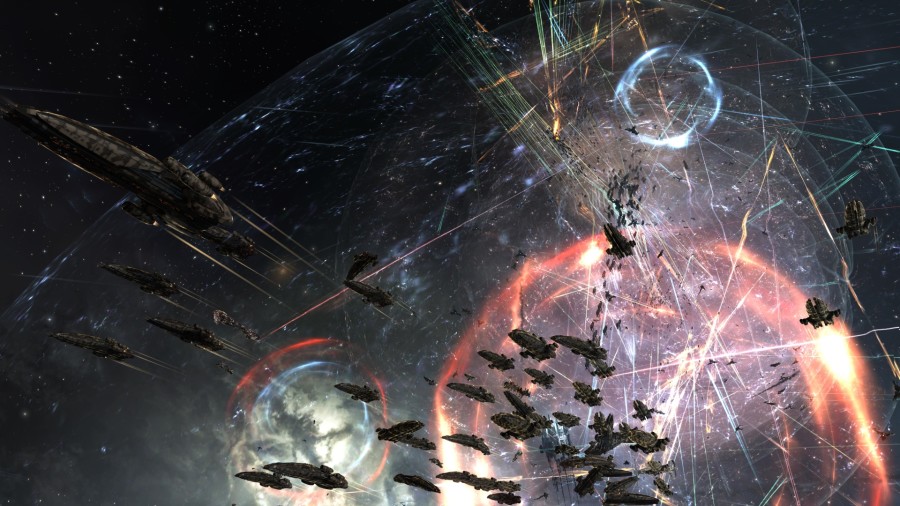 We thought it might be timely to issue a reminder about the Fleet Fight Notification tool. This tool is a means for players to give CCP advance notice of upcoming large-scale fights which could attract so many players to a single system or systems as to create a strain on the server and cause performance issues like time dilation which would adversely affect the gameplay experience of all those involved.

The Tranquility server which runs EVE Online is split into a series of nodes. Each node can play host to one or more in-game solar systems and those systems are distributed across the nodes every day during downtime.

A very busy system like Jita pretty much has an entire node to itself since it constantly has a large volume of players in local and a very busy market. On the other hand, a quiet system in the far outer reaches of Omist or a dead-end lowsec system somewhere in Solitude might be placed on a different node which it shares with many other similarly quiet systems that see very little traffic on a typical day. This method is generally how we balance the performance of systems across the cluster so that your experience in high-traffic areas remains consistent with those in low-traffic areas.

Where we sometimes run into problems (and you encounter things like time dilation) is when there is a large volume of unexpected player activity in a system which is on a node that is sharing its resources with several other systems. Some of you may have experienced the result of this in the form of unusual time dilation in an otherwise quiet system due to there being a sudden flurry of activity in an entirely different system several jumps away that your current location happened to share a node with.

Fortunately, we keep a few nodes in reserve for occasions when large player engagements occur so that we can allocate more resources to those battleground systems, and this is where the Fleet Fight Notification tool comes in.

Using the tool, players can let CCP know when a big fight is coming up, such as over a structure timer that one side or the other plans to contest in force, or if one group intends to invade another’s space en masse and attack their sovereignty. But it can also mean occasions where players are organising a public event like Stay Frosty’s Frigate Free-for-All, the annual Luminaire Snowball Fight or World War Chappy which saw 2,000 players show up for a brawl in Tunudan.

With enough notice we can take steps to reinforce the system(s) where the conflict will be taking place by distributing them to these reserve nodes at downtime in such a way that when the fighting does break out time dilation can either be avoided or at least mitigated somewhat. Our resources are limited however, so in order to make sure they’re applied to where they’re most needed please keep in mind the following when using the form:

In addition we would like to note the following:

EVE Online thrives on conflict and we celebrate the battles and ambitions of our players. It’s something not found anywhere else in gaming. CCP is committed to providing the best experience possible while you’re engaging in digital pugilism so please help us out by letting us know in advance of where and when you intend to fight.