As first revealed at EVE Vegas 2015, we are making some major changes to capital ships in EVE in the upcoming EVE: Citadel Expansion and you can expect additional dev blogs as more details become ready to announce.  In this blog I’m going to cover the new Force Auxiliary capital class, our transition plan for current carrier pilots, new capital modules, and some design discussion on combat refitting! 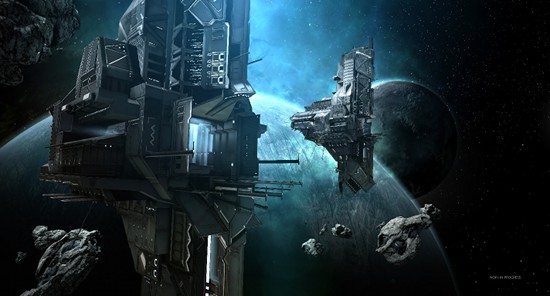 One of the biggest components of our capital changes this spring is the new class: Force Auxiliaries, which some of our players have taken to calling FAX or FAux. This class represents capital repair logistics in a fully dedicated form. Here’s the beautiful new ships and their preliminary bonuses as of now:

Some of you may have seen preliminary stats for these ships gleaned from early test server builds. It's important to remember that making predictions from unannounced test server details is always done at your own risk.

In particular we want to reassure wormhole players that the mass values for the Force Auxiliaries on our test servers are designed to be released alongside an increase in the maximum jump mass of the existing capital-capable wormhole connections. This per-ship mass limit increase is also designed to accommodate capitals fitting the new capital armor plates. Wormhole connections that currently allow Dreadnoughts and Carriers to pass through will continue to accommodate Dreadnoughts, Carriers and Force Auxiliaries, and will continue to disallow Supercarriers and Titans.

There will also be corresponding changes to the stats of capital remote repair modules and triage modules at the same time. For instance, don't worry about the loss of the range bonuses on the hulls as the range will be added to the base modules to compensate.

Force Auxiliaries are going to completely take over the old Triage role from Carriers, leaving Carriers to focus on their new offensive capabilities. As a result, we want to make sure that our transition plan accommodates all Carrier pilots. Here’s how we’re planning to handle it:

We seeded Light Fighter and Support Fighter skills. You can begin training them immediately in preparation for the expansion!

While we’re talking about Force Auxiliaries, we though you might be interested in some of the new modules that we’ll be releasing with the Citadels Expansion:

Remote Ancillary Shield Booster and Armor Repairer
Limited to one per ship, we're introducing Small, Medium, Large and Capital versions. Like the local versions they require Cap Booster charges or Nanite Repair Paste to operate. These modules should add a new aspect of optimization gameplay to repair ships of all sizes.

Heavy Stasis Grapplers
You can find out more details about these here! Only fitable to battleships and capitals.

As part of our work on capitals we have put together a capital focus group, comprised of some of EVE’s most experienced capital pilots. They are a great help to us. One of the hottest topics in that discussion group is the proposal we’ve made with the capital rework to restrict refitting in space whenever the pilot has a weapons timer. We are still planning to go forward with that plan and after a long talk on the subject we thought it made sense to include our reasons in this blog rather than just in the focus group.

Let’s talk about why we want to make this change. We feel that it’s essential to the fitting game, and all combat in the game, that you have to make commitment to decisions. These commitments scale depending on their impact (think ammo choice vs ship choice), but ultimately all of EVE is a about meaningful choices and their consequences.

Refitting in space removed an enormous amount of commitment, basically offering all possible fittings to any ship at any time, so long as they have a Capital/Nestor/Depot nearby. The addition of more refitting service options (Depots, Nestors) has brought this issue into sharper relief but the underlying design flaw has been in EVE for many years.

To provide an example of how important it is for competitive games to require some level commitment for certain key choices, imagine the same issue applied to a collectible card game where suddenly it was allowed to swap cards in your deck out for other cards at any time during a match. This would have a hugely negative affect on game-play. Deck construction (fitting design) goes mostly out the window and there’s no need to even bother trying to figure out what deck your opponent is running. Ship fitting serves many of the same design goals that deck construction, equipment choice and talent specs all serve in other games. To make choices truly matter we need some level of commitment and consequences, and as a result we feel we need to slow down refitting in space during competitive situations.

This is not simply about any one specific ship or fitting style. When we mentioned Slowcats at EVE Vegas we did not intend to imply that this change is aimed at that one issue. There are some gameplay issues that can be solved with a narrow scope: by targeting specific ships or modules. On the other hand, some issues represent core design problems that will continue sprouting new problems if we simply treat the symptoms rather than the core cause. We believe that instant combat refitting represents the latter class of issues, a core problem with the meaningful decisions and consequences the game presents its players.

It's not simply about carriers refitting from tank to damage and back, or Macharials swapping autocannons and artillery, or ships fitting warp core stabs mid-combat, or switching racial jammers, or capitals fitting shield, armor and hull tanks to vastly increase their EHP. All of these issues are simply symptoms of the same underlying issue and if we were to deal with each of them individually more related problems would sprout up in their place.

We are not married to any one implementation for enforcing commitment in fitting choices, and we are very open to hearing feedback from the community about how you think this problem should be solved. However we do believe that it must be solved. Our currently proposed solution is that you can’t refit with a weapons timer. Meaning, if you are aggressing a player, or assisting a player ship who is aggressing a player, you can't refit for 60 seconds.

Now, the problem that the capital focus group has raised, and reasonably so, is that combat refitting can add a lot of excitement and strategy to fights, especially for Triage pilots, and they would be very disappointed to lose that game-play. Makes sense. It’s active, it takes sharp thinking to figure out which fit is ideal depending on your situation, and it takes practice. Despite those good reasons, we feel that we can address the amount of mastery and excitement available to Triage pilots without the need for refitting in combat, and that’s exactly what we want to do.

New modules are the first part of our strategy and we listed a few of those above, but we don’t want to stop there. It is important to remember that Force Auxiliaries are new ships and can be tuned specifically for Triage gameplay in both mechanics and stats. We’re exploring a range of options and we’ll continue to work with the focus group as well as blog about any future additions, but ideally we end up in a place where Triage pilots have great ways to express their fitting knowledge before fights, and also plenty of options to flex their tactical mastery during engagements.

Thanks for reading, look for more on the Capital rework as we approach EVE: Citadel this spring,
-Team Five-0