Rebalancing EVE, one ship at a time

I always find it fascinating how the most life threatening issues often come up from the smallest, most innocent moves. For instance, you could enjoy a meal at home, drop the dirty cutlery into the sink with the firm intention to clean it the day after, only to realize two weeks have passed and the kitchen is now inhabited by a new indigenous, hostile life-form derived from all the junk you forgot to wash during that time.

The same shocking, and quite horrifying principles apply with ship balancing. Tweak things a little up, down, right, left and right again, then notice you are two years into the future and are now faced with a system that is in dire need of an overhaul. Identifying roots that need to be plucked out and preparing the soil for healthy balancing is a daunting task, but we now estimate to be in a proper position to give you a glimpse of things to come.

Climbing your way up is a bumpy ride

The first overhaul we are considering is to clean ship progression and skill requirements.

We currently have four racial skill requirements for Frigates, Cruisers, Battleships and Capitals, while the Destroyer and Battlecruiser skills are totally generic. This creates a certain number of issues, such as:

As such, we want to streamline ship training by implementing the changes below:

To sum up, this means that tech 1 sub-capital vessels would take a bit longer to train for (from 9 to 17 days for Battleships for instance), capitals would be less time consuming (30 days faster) and tech 2 ships like Interdictors and Command Ships would require 14-20 less days to train for.

If and when such changes occur, we would remove the generic Destroyer and Battlecruiser skills. That means getting race specific skills for the two ship types, which we will of course reimburse you in a fitting manner. While the exact plan for this reimbursement has not been nailed down completely, the principle of the reimbursement will be “if you could fly it yesterday, you can still fly it today.

However, reducing training requirements for various ship classes is not a side-effect we are necessarily happy with. That is why we want to introduce new skills, tied with the new concept of ship lines.

Stating the not so obvious

To understand what ships lines are all about, let’s recap the four theoretical factors that sort ships out:

Combining all these elements, we arrive at the following ship trees: 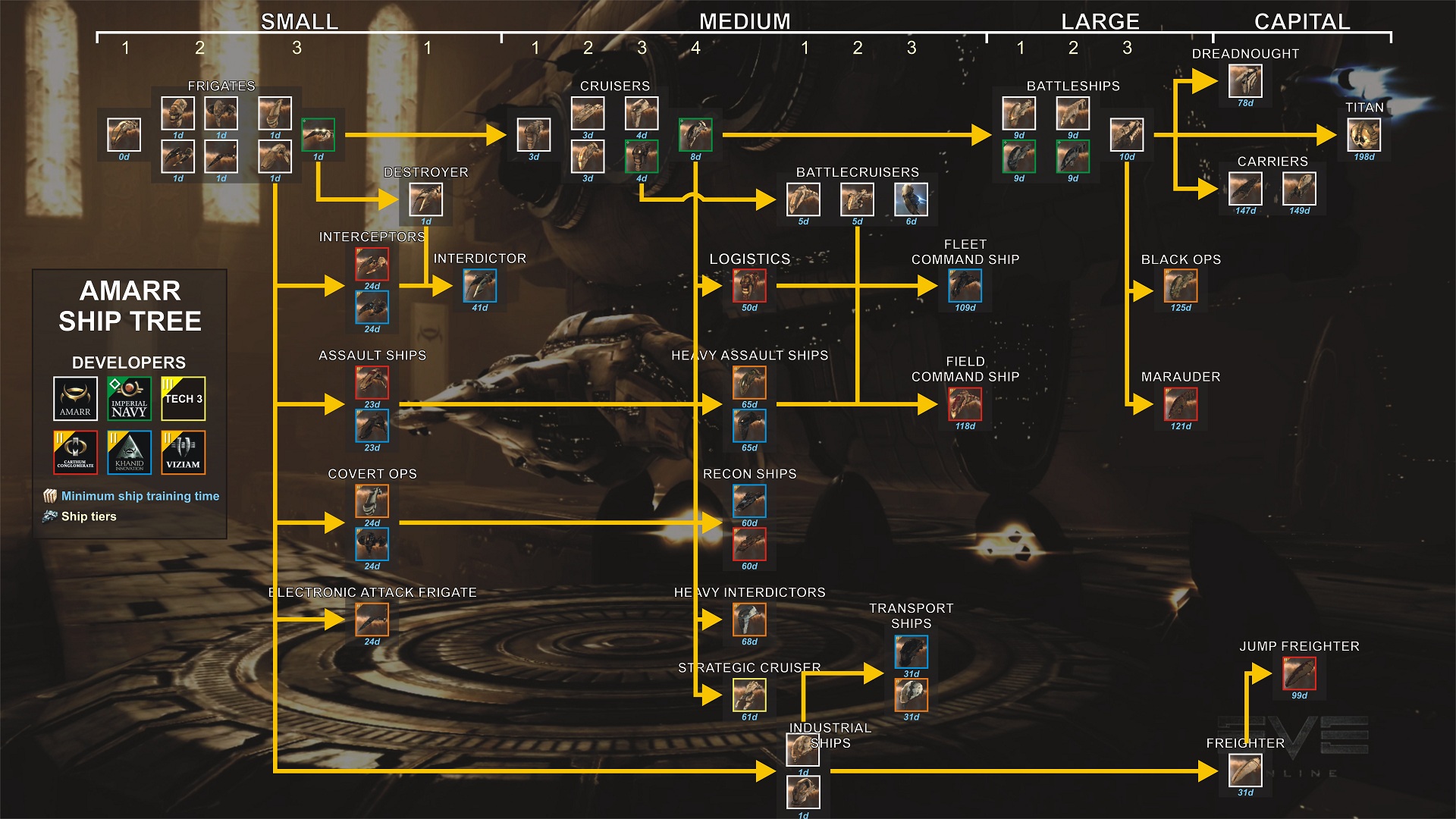 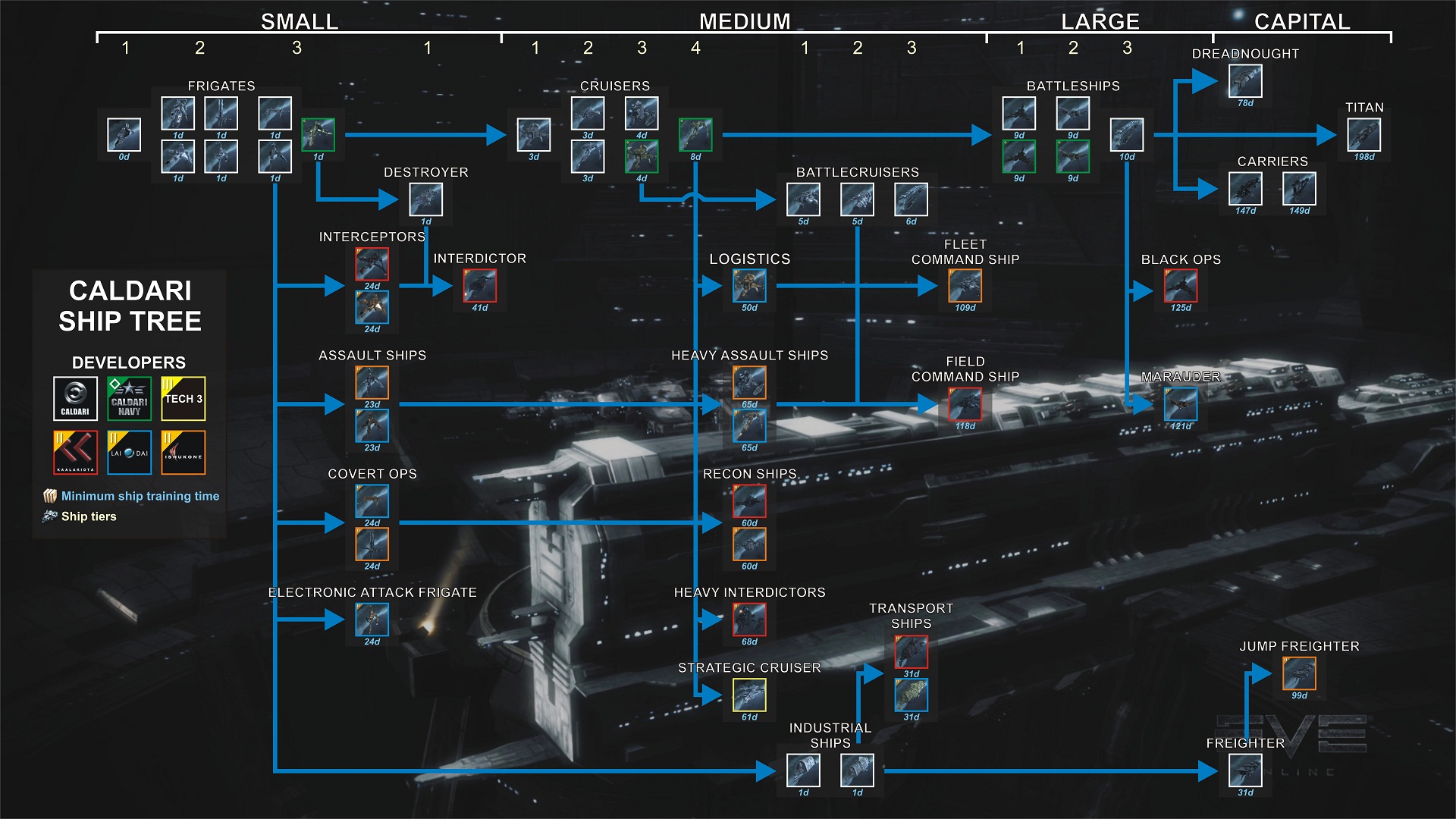 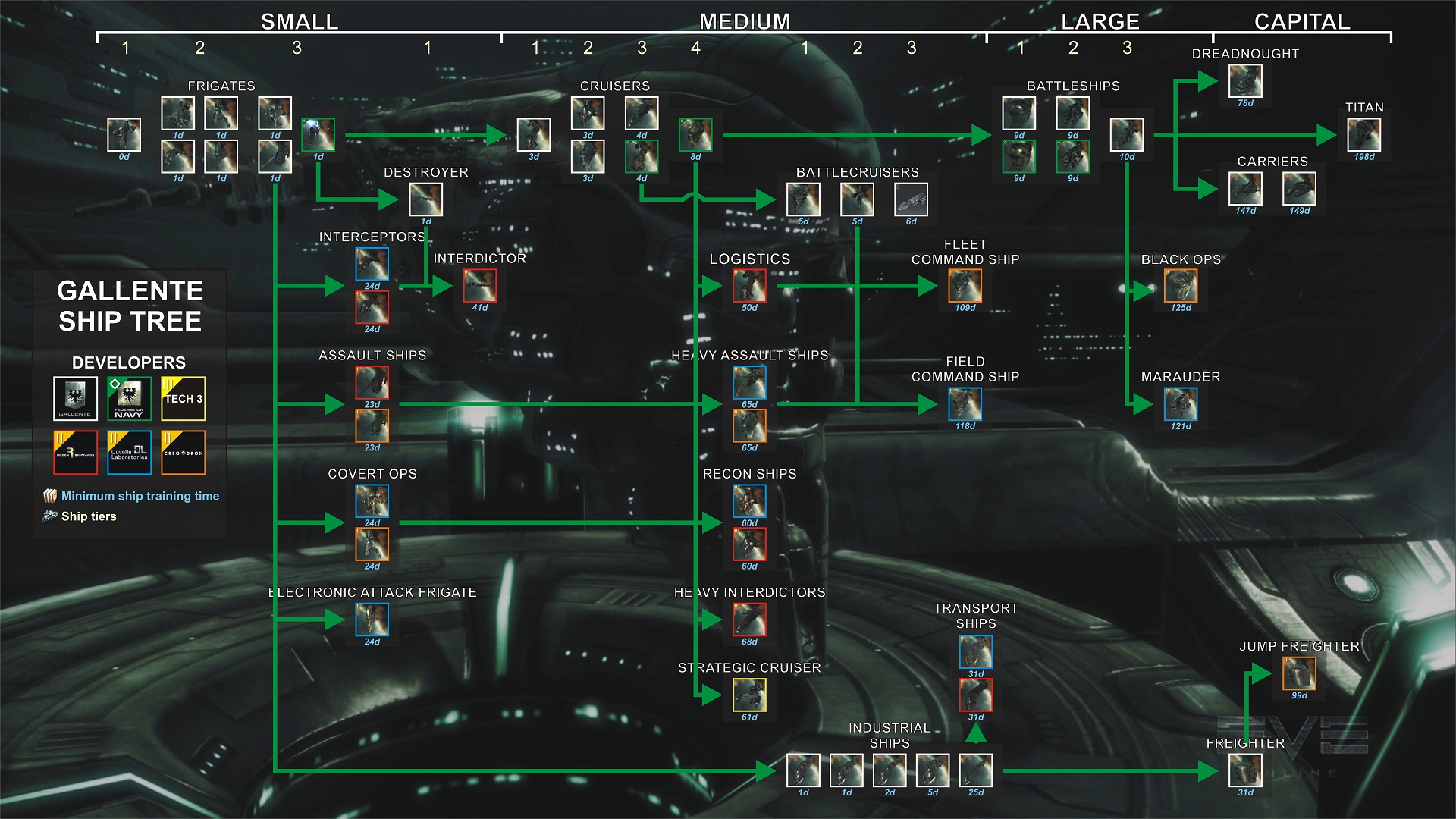 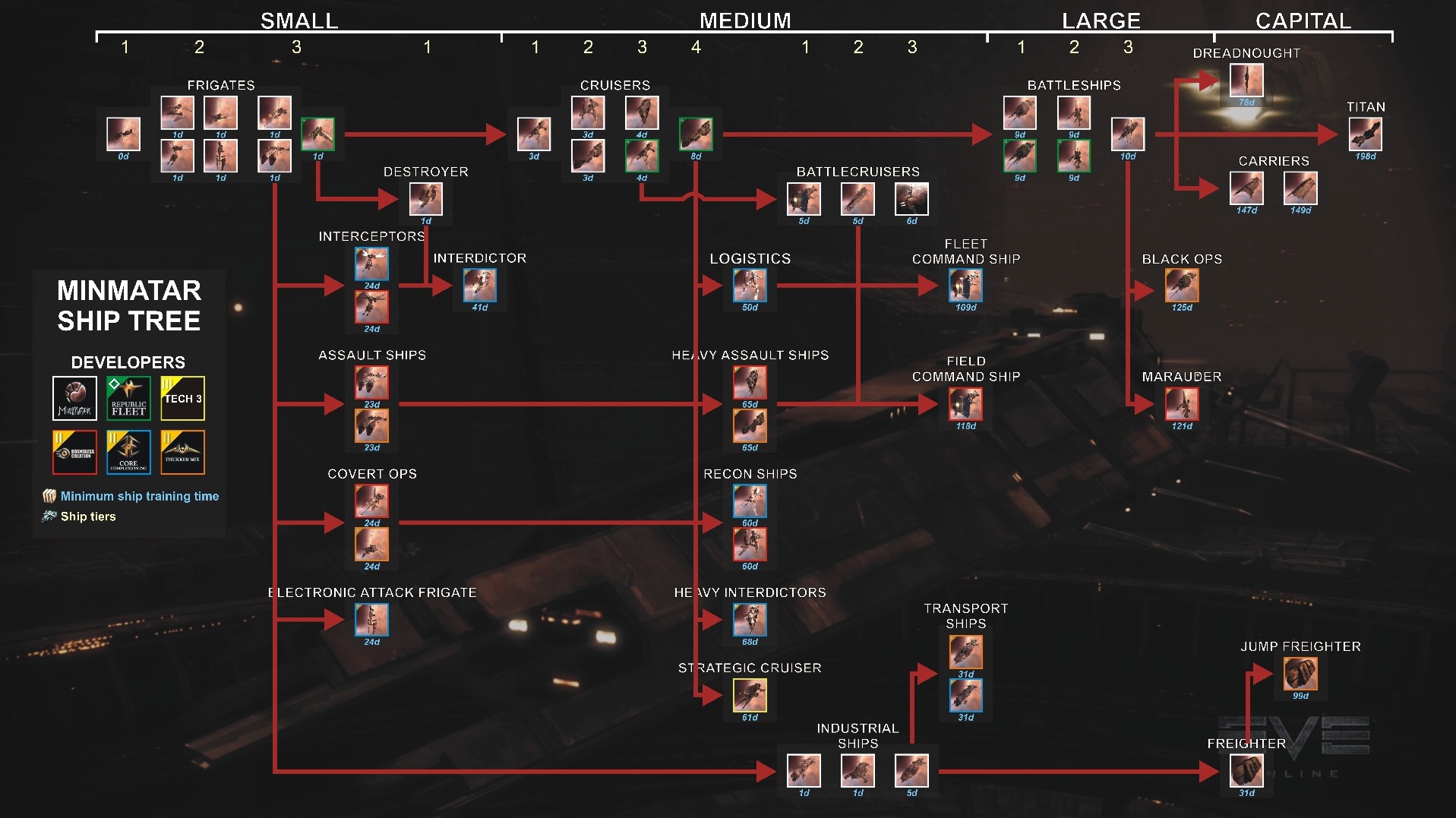 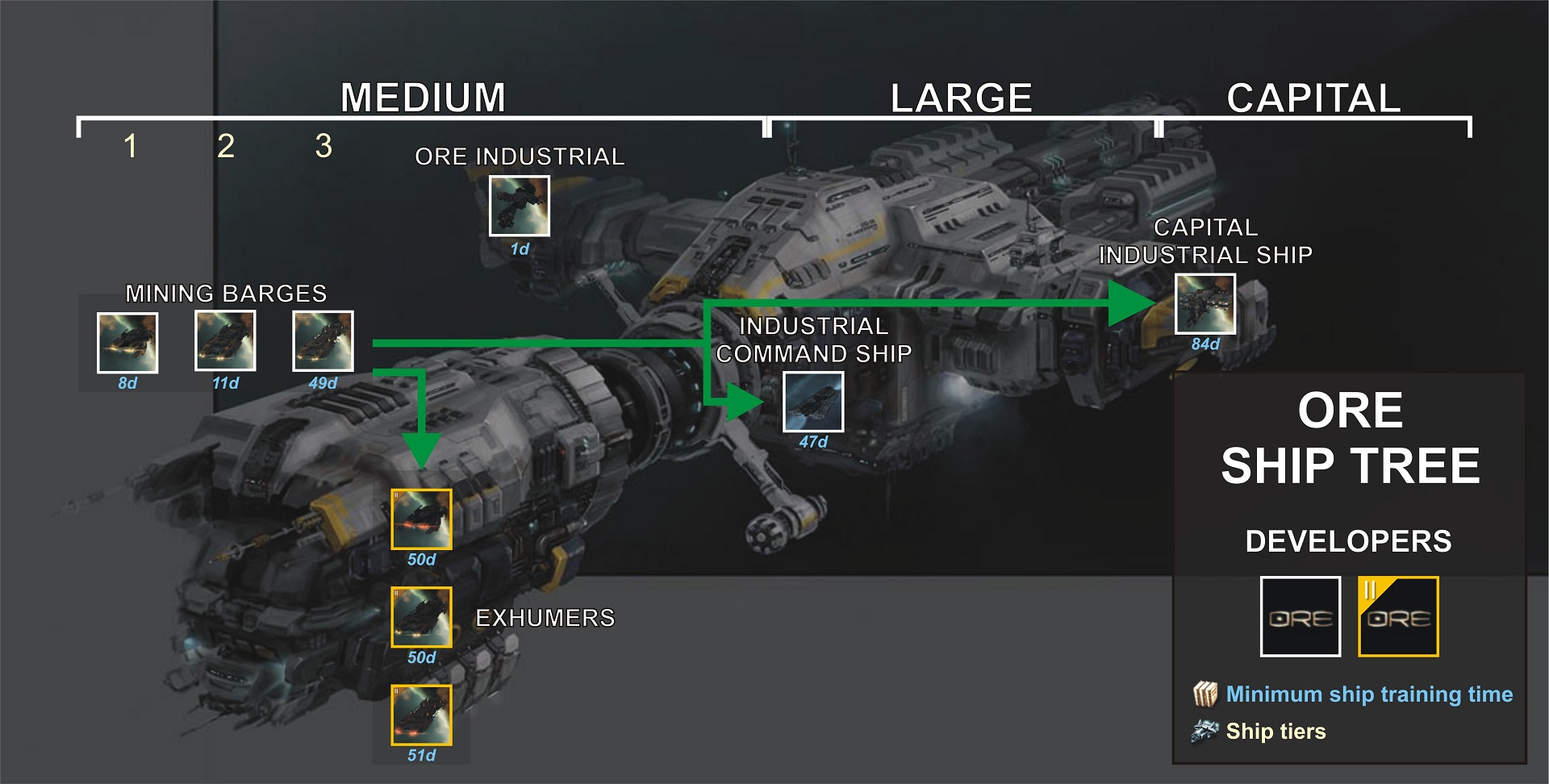 In practice however, after assessing ship slots, EHP, speed, fitting potential and role overlap, we estimate almost half of our currently available ships to have suboptimal use, or are just be plain not worth it at all for pilots looking to min-max.

There are many reasons for that, one is due to the way we balance ships according to the tier system. Indeed, because the tier system dictates raw slots and hit points, it directly impacts ship performance, and thus affects balance. This is most obvious with the tier 1 versus tier 2 battlecruiser comparison, or even with the cruiser class as a whole. Battleship hulls, for having comparatively more base slots to play with, are less affected by this problem than their smaller counterparts.

That is why we want to remove ship tiers altogether, then refocus our balancing philosophy to be based on role. That means finding common themes, or lines that fit ships with the same purpose, then adjusting slot layout, HP and fittings within each class to support this goal.

The advantages of such approach are multiple:

Paving the way for the future

So, how does all that affect you? Starting with EVE Online: Inferno, we will begin revamping ship classes one after the other, making sure obsolete hulls serve a purpose. This is still in the research phase and constructive feedback is most appreciated while we wait for the next ship balancing blog to come out, dedicated to how such changes will impact the Amarr Empire fleet.

Catch CCP Ytterbium and his game designing friends at Fanfest 2012 and chat with them about ship balancing or anything else that's on your mind! More information on Fanfest topics, tickets and travel can be found here.