Hello, we at Team Klang hope that you have enjoyed playing EVE Online: Odyssey so far and in particular all the changes made to the audio of EVE.

With the Odyssey expansion, a lot of new features were introduced and these require audio attention. In this DEV Blog, I (CCP WhiteNoiseTrash) will go through some of the thoughts and the creative process behind the sounds of the new transitions: between jump gates, docking and undocking and when being podded. I will also go over some of the other audio changes such as those associated with the new exploration hacking “game” and the new radial menu.

The new jump gate transition creates a whole new immersive experience when jumping. Instead of the old fade to black and load the new system (including a loading bar), an actual wormhole-like tunnel is formed in space between the two gates in the two systems and your ship is thrust through violently, giving a great feeling of distance and movement instead of instant, magical teleportation.

There is already sound for warping but this type of jump required a bit more detail work---because we can.

One of my main ideas for this was to have the actual jump sound remain as they used to be, but cut them up so that there would be a morphing going on between the sound of the jump and the sound of flying through the small wormhole, as well as when arriving.

Making sure that all these sounds “fit together” is a bit of a challenge. Challenge accepted.

This new feature contains three new elements different from the previous jump mechanic. A wormhole is formed, the actual jump is performed and your arrival at the new star system.

To create a whole new jump sequence when the actual jump is performed I was greatly inspired by a feature I had previously made sound for, the micro jump drive module.  It has a charging period, a jump and an arrival which is different depending on whether you are the ship actually jumping or you are a 3rd party witnessing a jump. I took apart the old jump gate sounds and began manipulating the sound when being fired away through the jump gate and used those waveforms to design a sort of traveling sound, which could then be used to morph between the jump gate sound and going through the wormhole.  In this way no matter what jump sound is used, we are certain that the sound of traveling will always fit the actual jump as well as the arrival. The sounds would be tweaked to fit the sounds used for the jump, so we get a form of audio unity all the way through the jump.

To create the morphing I used Steinberg Wavelab to edit the current jump gate sounds, taking the very last part of each of them and cutting out the individual waveforms and sequencing them again in Steinberg Cubase with added effects. Simple things like phasing, flanger and reverb create a drone type of sound out of the waveforms and I used a lot of time stretching to prolong the sound instead of just looping it over and over.

Above: Cubase mixing session, with heavy EQ work on most tracks.
Below: Wavelab session, going from one jump sound to one jump loop.

By using the same base sound materials that were just played, we can make sure that almost no matter how much manipulation is done to the sound, there will always be aural unification during the entire jump.

Upon arrival at the new star system there must be a sound which suits the other sounds used during the travel, so I used the original sounds of the jump gates again and ran them through a convolution reverb with a specially made impulse response reference.

After some heavy EQ work on the results of this combination, a deeper and almost reversed sound resulted - which could be used as base material when arriving at the new star system. Combining these sounds with others makes your arrival more detailed and different every time.

This jumping effect is also taken into effect when using cynos or jump bridges – as well, there is a new transition sequence when using wormholes, which has also been given a newly remixed sound.

Pre-Odyssey, there was no real visual or audio queues when undocking.

The audio team is working hard to get more “Information” in EVE’s soundscape.  This doesn't mean that this information is a game or experience changer, but more that this is sound that is adaptive to the current situation; it may be very small changes but they are, none the less, important.

Such changes could be that the undocking sound is faction dependent, so depending on your ship’s faction and the type of station you are in the sounds will generate differently.
This is very important for the future of sound in EVE; in this case it will not change game play or give any “useful” hints, but for aesthetic reasons and on other features, such adaptive sounds could give the player just the information one needs to gain a tiny advantage or help to make the right, or wrong, choices.

Pre-Odyssey, when flying in EVE and being shot at (which could be quite often) one could experience the tragedy of exploding and becoming a sitting duck in a pod. Previously there was no transition between these situations or from ship to pod or from pod to death.

The new experience will be that you are dying. And I mean really dying like only a frozen space corpse can.

The sound of the explosion is now much more prominent (to complement with the new visual sequence of the players body floating in space) and is accompanied by the sound of the defeated capsuleer choking in the vacuum of space and taking his or her final breath, along with a re-spawn sound which is race and station dependent.

The new radial menu offers quick interaction with pretty much everything. 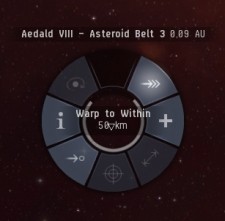 It will have audio feedback as well--not just the usual sound when it appear and disappears. When selecting orbiting or other distance choices, the menu will provide the player with an audio feedback – allowing for basically this to be done with your eyes closed if you know the value you are looking for and how that value sounds.

Odyssey offers many new exploration features and one of them is new signatures and anomalies with hidden sites that can be hacked to gain access to their sweet loot.

The new “mini-games” provide a lot of audio opportunities. First of all, the entire soundscape is changed once entering the hacking interface.

A combination of soothing sounds, atmospheres and interaction sounds will take over, with each type of node has a unique interaction sound depending on the result of the node once clicked.  Every type of tool or object picked up has a sound.

The most important and coolest audio feature in this case is the ability to hover over the yet-to-be-clicked nodes and, as part of the soundscape, hear very subtle changes to the sounds of the computer you are trying to hack.

Each of these provide a tiny bit information about what is to come out of the specific nodes, but what sounds like what, players will have to figure out themselves. This will become extremely useful when dealing with data core hacking when you are just a little low on skills and other things, all information that you can get about the available nodes is important.

All the sounds for it are made by synthesizing the atmospheres which are then used as parts of a generative soundscape through our audio engine.

All the sounds of the actual nodes, both the hovering over the nodes and the interaction sounds, are made from computer sounds recorded by contact microphones of hard drives and other computer parts as well as raw data files made into audio files and edited heavily.

Whenever a hack is successful, the player will have the chance to catch some of the loot spewed into space from the hacked data core. Whenever such an object is successfully retrieved a sound will accompany the looting, giving you audio feedback whether it was something useful, worthless or nothing that you just picked up. 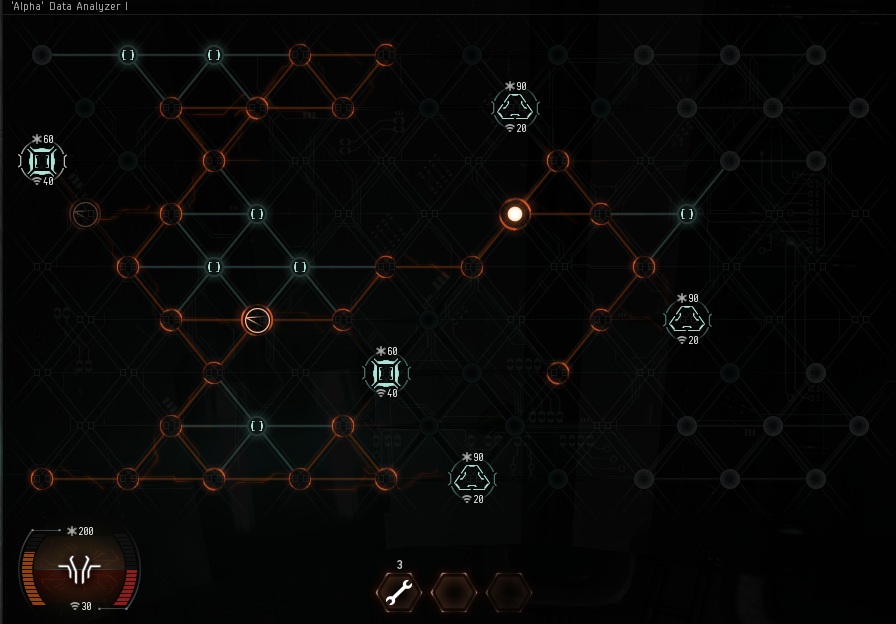 New audio visual warnings:
Whenever a player is low on health, be it shield, armor or hull – EVE will now provide you with a visual warning of this.

The old warning sounds are still there, but there will be a new continuous sound along with the new visual warnings to remind you that you are just about to die or that your other player in another client is low on health.

When closing in on a wormhole or flying in wormhole space, you will experience new musical atmospheres. In nullsec we changed from less repetitive atmospheres. And in low sec you’ll have several brand new music tracks by CCP RealX to listen to while hunting down those new NPC spawns for their sec tags. You can check them out on our SoundCloud page //soundcloud.com/ccpgames -- “Unidentified Phenomenon” “The Day After the Storm” “Pirates Den” “Is Anybody Out There” and “Gas Giant.”

Whenever docked in a station, depending on the amount of players currently at the system where the station is located, the soundscape of the hangars will change to mirror the population level.

All hangars will have totally new revamped soundscapes as well.

This is, along with all the other helpful features, the beginning of our plan to make the sound of EVE a more useful and adaptive “tool” for players to use when playing the game. We want to create greater immersion across the board and make it so that sound is not just there as a luxury but as something both useful and helpful to the player. 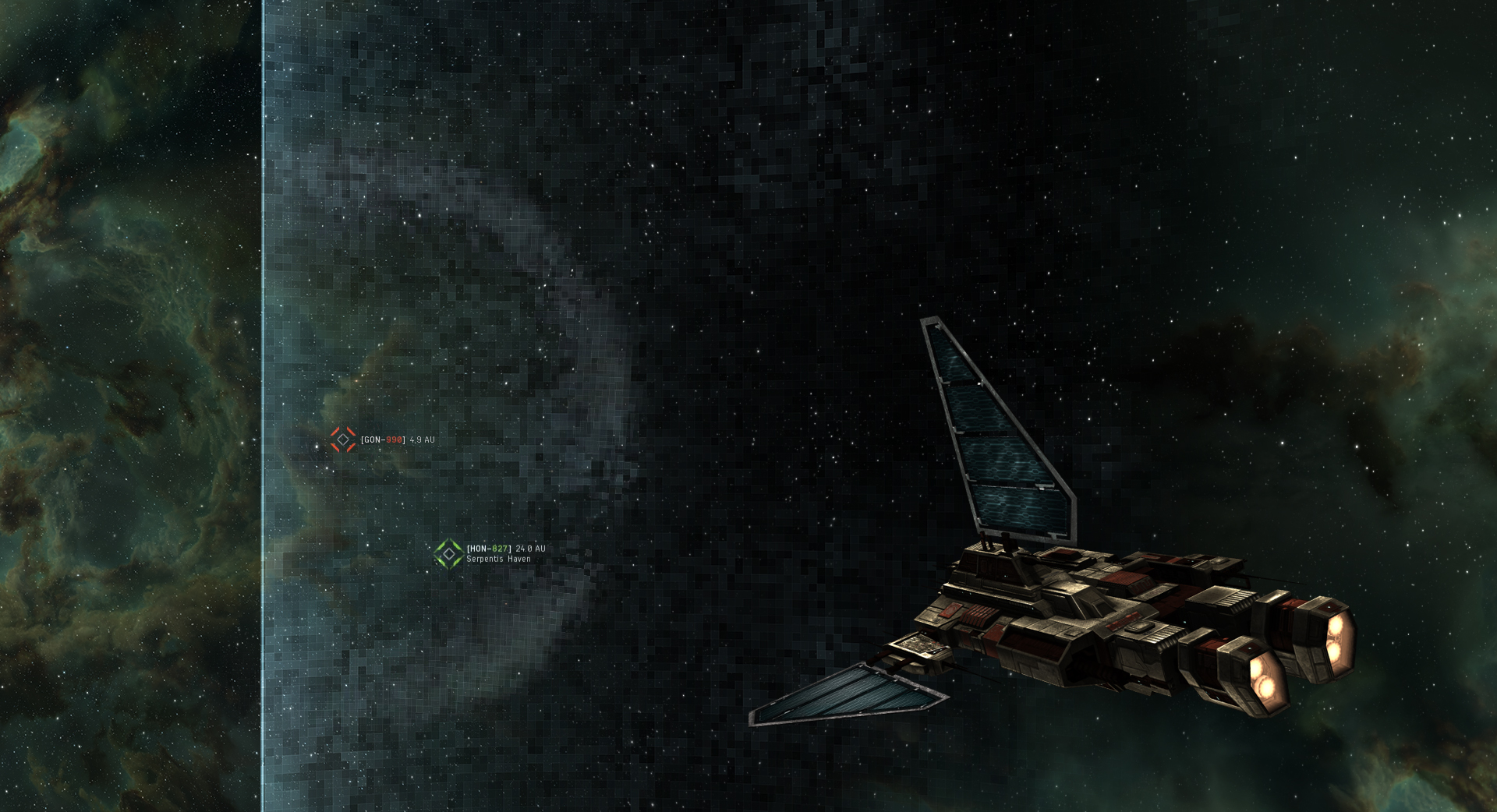 The new scanner system allows for players to more easily discover anomalies and signatures in their current system.

Such a new feature will of course also have new audio features along with it. The new scanner is a remixed version of the old scanner sounds.

Since the scan can be performed quite often, we wanted to keep it a bit subtler. Therefore, after each scan there is a slight indicator sound of whether you found anything or nothing.

Each of these results has a unique ID which will be audible whenever hovered over. Hovering over the result of the scan will allow for the player to hear the distress or emergency radio signal from that specific source, giving an indicator of what there might be at this location.

Players will have to find out themselves what sound maps to what type, but there is an audio indicator on hovering over the results and it may reveal many things about the location. 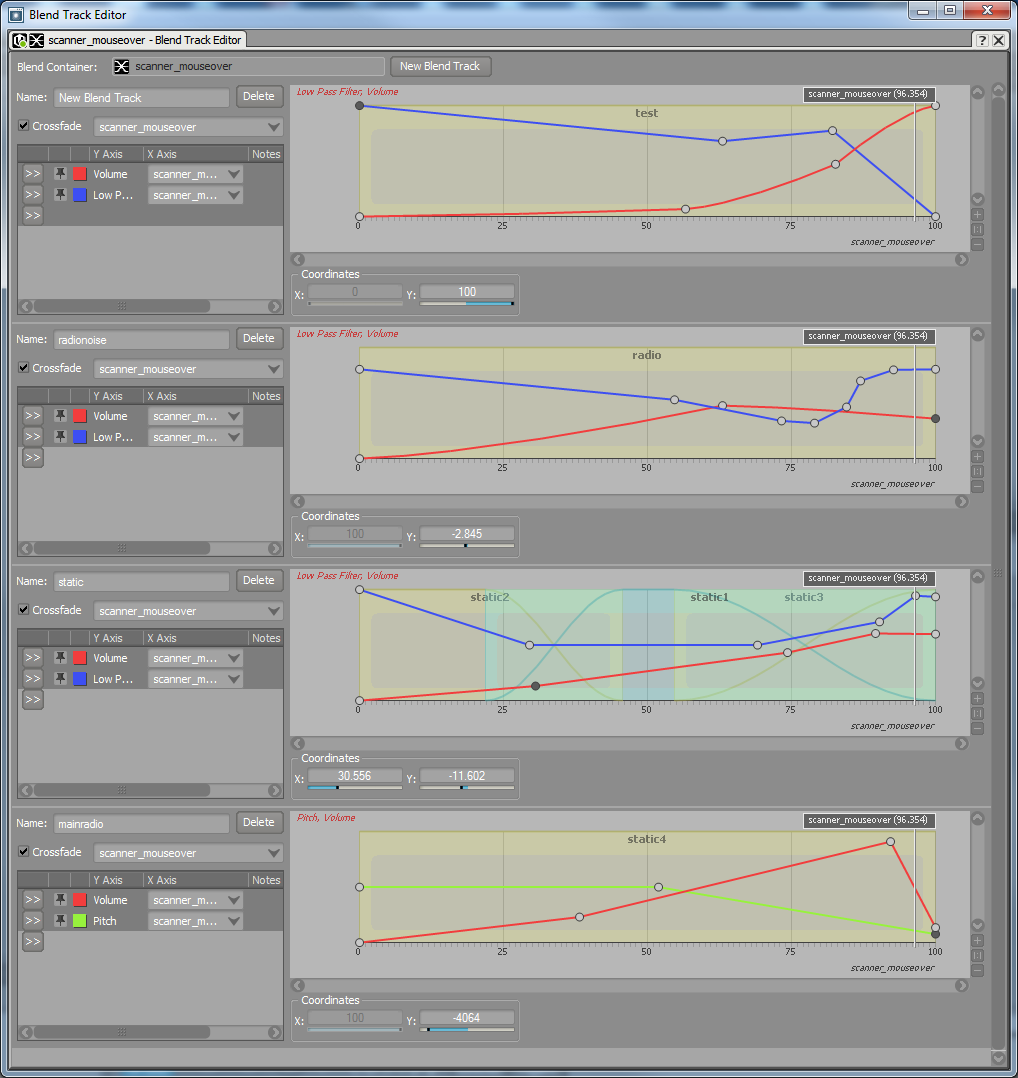 Here is an example of how the radio signal is created in our audio engine.

That's it for all the audio changes in EVE Online – Odyssey. This expansion has, without a doubt, one of the biggest groups of changes to the EVE audio system, with many big and small changes, as well as new ways to communicate with sound from game to player. We hope that you will enjoy it and go exploring, enjoy the new crypto hacking game and hopefully not experience the pod death sequence too often.

Thank you for reading along.