Since this is my first post I would like to use this opportunity to introduce myself to the community. Some of you may already know me from the Security Presentation CCP Sreegs and I did this year at Fanfest. For those who don't, my name is CCP Pollux, and I am a Senior Security Specialist and a member of the EVE Security Task Force.  I joined CCP in February, and my job since then has been to identify and address software vulnerabilities and to design and implement various kinds of security related software functionalities/solutions into the EVE Server and EVE Client.

In the past months the EVE Security Task Force has been assigned various tasks related to security issues, but one of the main tasks this team has been given was to develop new systems and tools to identify, classify and track various kind of unfair player activity. The goal was to simplify and improve the daily mission of hunting down those who, for one reason or another, disobey the rules of EVE and cheat.

One particular type of cheating that the ESTF has been focusing its attention on is programs that automate EVE's gameplay on behalf of a player, or bots. In the past months of our war against the bots, we have been constantly identifying and tracking players using different types of bots, enforcing our policies and giving them their time off from New Eden.

In this blog, we will present you with how to use the Report Bot feature we have recently added to the EVE client.

We recently added the Report Bot feature into the EVE Client. This feature should provide everyone with a straight forward way of reporting Bots right from within the game.

| How to report a bot ? In order to report a player as being a bot you will have to carry out three simple steps. 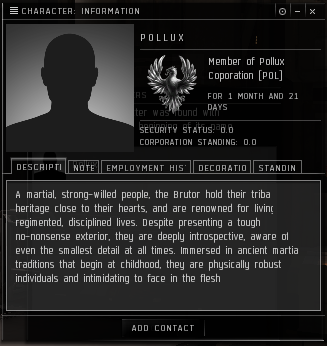 Click on the Actions Menu on the upper-left side of the Character Information Window, and select "Report Bot" from the Menu as shown in the next picture (Fig.2): 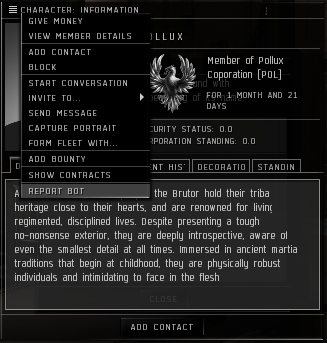 By now you should see the Confirmation Window as shown in the picture below (Fig.3), asking you to confirm the submission of the report. Click "Yes" to confirm or "No" to cancel the submission. 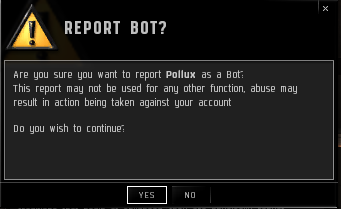 That is all you have to do to report someone as a bot, all from within the game! Easy isn't it? We surely hope it is.

Now, the players reported using this feature are automatically investigated. If a reported player is identified as being a bot, the following policies are enforced:

Note that updated policies regarding botting and other various types of cheating can be found on the policies page available on our forum.

Bots are all about rules (events, states, conditions, transitions, actions) and goals! A bot reacts to events according to a predetermined limited set of rules, triggering appropriate actions in response in order to meet its goals. In a world otherwise driven by human players, most of the times this rule based behavior can be observed under close investigation.

Therefore, before submitting a report, we encourage players to perform a brief but structured investigation.

* Note
There are different types of bots, each type having other rules according to which they carry on their activity. Try to adapt your investigation to the type of bot you are observing.

We strongly recommend against using the Report Bot Feature with any other intent than the one it has been designed for. Abuse of this feature will have consequences.

In addition to this blog, we will soon release a dev blog about Automations that we encourage everyone to read. It describes Automated Game Agents such as Bots and Macros in much greater detail, including the principles, concepts and techniques used to bring them into existence, how they work and what their limitations are. It is meant to give everyone hints on how to differentiate Automated Game Agents from human players right from within the game.

Of course, if you have any questions, shoot!

Fly safe,
on behalf of the ESTF,