The not-so-great-after-all deep safe nerf of 2010

tl;dr EVERYTHING HAS CHANGED. No more deletions! Things will be moved at some point!

A defect reared its ugly head right at the end of last year, detailing a way to "overshoot" a warp, thus allowing you to travel a fairly arbitrary distance in a given direction under certain circumstances. This was fixed by software and marked for deployment in Tyrannis.

Once the actual defect was fixed, we realized that it would also make sense to clear up all the extra bookmarks created as a result of this defect - and, by the by, all the other deep safe bookmarks created by various no-longer-functional legitimate and illegitimate mechanics over the years.

The neatest solution would be to move all affected objects in a given system closer to the sun. However, EVE Development's resident DB guys were booked pretty solid for Tyrannis production, so the quickest solution was to instead make a few code changes to render deep-safe locations effectively inaccessible. Early in this process we committed to informing pilots about this as soon as possible in order to give proper prep time, which in turn focused us on finding a satisfactory solution as quickly as possible: the "quick" solution.

In the rapid process of defining this "quick" solution, we discovered a series of issues with the basic plan, which we fixed with further "quick" additions prior to writing the first blog. Player feedback to this initial bookmark blog identified further issues that we hadn't considered, which would make the "quick" solution even less quick to implement properly. We quickly decided that the "neat" solution was absolutely necessary.

To that end, one of our Ops DB guys has volunteered to find some time in his schedule to write and tune a "move script", allowing us to implement the clean solution without disrupting any of EVE Software's plans for final development of Tyrannis.

We can't 100% commit to this being tested in time for Tyrannis, but we're committing to implementing a full and proper solution on this issue: the move script will be deployed when it's ready, likely either in Tyrannis itself on May 18th, or in a release shortly afterwards.

Thanks to everyone who raised warning flags once the blog went out - we've caught our mistake with plenty of time to spare and we're implementing a better solution instead.

1) Getting ready to deploy the fix for the original defect with Tyrannis.

2) Testing a move script to move the old deep-safe bookmarks and all items in deep space.

The move script will locate all items (physical objects including ships, cans and structures - anything you can collide with is an item) and bookmarks that are more than 20AU further from the sun than the furthest celestial. It will then move them towards the sun until they are exactly on the 20AU boundary for that system. No physical items will be deleted. No restrictions will be made on warping, module activation etc. 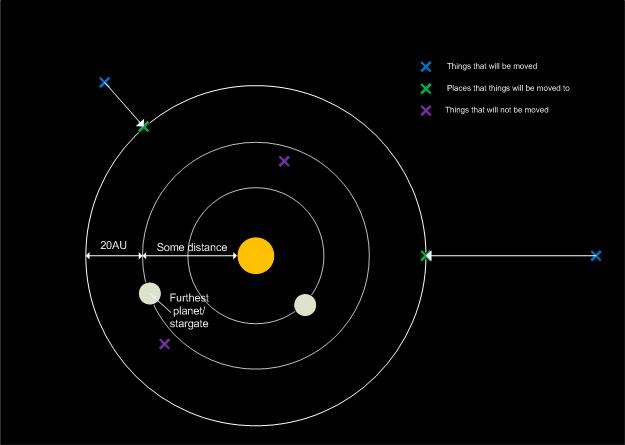 If you have any further comments then, as always, please let us know in the comments thread.

The fun bit at the end

(These statistics courtesy of Ops being awesome)