Good day spaceship people. We have been actively working on a massive upgrade to the EVE in-space camera over the last few months. We initially released it to our public test server, Singularity in November and then moved it to opt-in beta on Tranquility last December, enabling us to collect a lot of great feedback. We’ve gathered a lot of data and made a lot of changes, fixes and improvements.

It is now time to take the next step, which is to turn the new camera on by default on TQ. Since changes to fundamental parts of core gameplay systems can be delicate, we’ve decided to keep the option of reverting to the old camera for about 1 month as of now. If, for whatever reason you feel it necessary revert, please us the forums to let us know why so that we’re able to squash any remaining issues before we pull the final plug on the old camera’s dwindling life support.

The initial driver for this substantial chunk of work was the identified need for a tactical camera that wasn’t necessarily attached to a space entity all the time—in preparation of the Capital rework and more coming in the EVE Online: Citadel Expansion. When we started digging into the code, we quickly realized that the old camera wouldn’t be a suitable foundation. During that digging we also found this:

I want to make it totally clear that my uncharacteristically careful phrase selection of “not suitable” to describe the old camera code is in NO WAY linked to the fact that it was originally written by our glorious, all-loving, all-knowing, dear CEO (that should be enough to keep my job).

Jokes aside, requirements and standards have changed quite a bit in the last 16 years, so even though the old camera did its job just fine when created and has had its share of fixes and improvements throughout the years, it was well overdue for a rewrite. What we have now is a system where multiple, special purposed cameras can happily live side by side to give you the best view possible of New Eden. As a result, we now have three different in-space cameras instead of the one before:

The video description contains time stamps to the various sections and features described below.

The Orbit camera (ALT+2) is active by default when you first enter the game and is fixed on orbiting around an object in space. You can switch to a new object by performing the “Look At” command on that object. This camera is designed to give the player a somewhat cinematic feeling and try to emphasize things like scale and speed while behaving pretty similar to the old camera in other regards.

The Tactical camera (ALT+1) is designed to be purely practical and works in a similar manner to Real Time Strategy cameras by allowing panning. Objects can be attached to by performing the “Look At” command, and detached from by panning away with the right mouse button. In this mode, we don’t have any of the cinematic effects of the orbit camera present.

The First Person camera (ALT+3) is probably the least practical (at least for now), yet most jaw dropping of the three. It is highly recommended that you try it out with the not-so-long-ago-introduced manual flight feature that is mapped to the keyboard arrow keys by default.

Marquee select is simply the act of drawing a box on the screen using the mouse to select one or more things. It can now be triggered by holding down any of the combat command shortcuts (ALT for “Look At” or C for “Track”, etc.) and dragging with the left mouse button over the 3d scene. On releasing the mouse button, the selected command will be performed on the selected entity or entities. Even though this new feature is not strictly tied to the new camera modes, it ended up in this package as it allows you to apply camera commands such as “Look At” and “Track” within the 3d scene, hassle free, as opposed to relying on the overview or right-click menus. “Look at” is now implemented to work nicely even when you select multiple entities at once, essentially allowing you to drill down into large clusters of ships step by step.

The nice side effect is that marquee selection also works nicely with any other in-space command such as “Orbit”, “Approach” or “Warp”. One of the major reasons why it previously wasn’t practical to play the game relying mostly or only on the 3d scene was the near impossibility of picking those tiny brackets moving at lightning speeds. Marquee selection solves this problem quite elegantly as it’s much, much easier to draw a box around a handful of moving pixels than it is to click them. Oh, did I mention you can now use CTRL + Marquee to target multiple things at once? It’s pretty neat. We also added a new “Select” command to be used with marquee which is triggered by holding SHIFT.

To accompany the new camera modes, we’ve cleaned up the camera settings section in the System Menu (ESC). We’ve unified all camera related settings under the one “Display & Graphics / Camera Settings” section, added settings for “Camera speed”, “Invert Y-axis” as well as options to disable the new Orbit Camera “Ship Speed Offset” and “Dynamic Field of View” as we recognize that the more dynamic behavior simply isn’t for everyone. 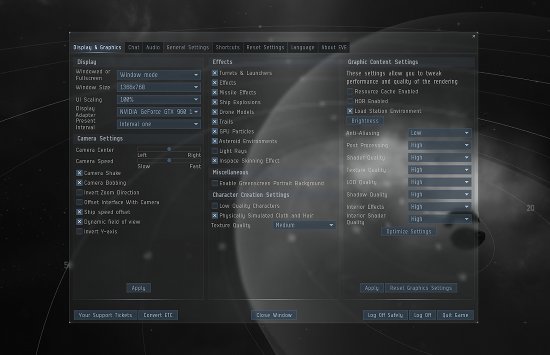 For those of you that don’t agree with us that the old camera needed a bit of work can simply turn off those two options, crank the camera speed up a bit and stick with the Orbit Camera, making the experience pretty much identical to the old setup.

The fact that we’ve now finally unlocked the possibility of having special purposed cameras that we can easily switch between has already sparked a lot of very interesting ideas, so don’t be too surprised if you’ll see some more camera related improvements in the future. There are some crazy ideas flying around let me tell you!

While the new camera remains in opt-out Beta (which, again, will be for about a month) we’ll be extra focused on monitoring feedback and making changes/fixes accordingly, so please make sure to voice your opinions on the forum thread attached to this blog sooner than later.