What is going on with mineral prices?

We have noticed in the past few weeks increased discussion on our forums with regards to what is going on in the EVE economy these days.  The fact is that a whole lot is going on – and it is about to become a even more interesting when the changes described in this DevBlog earlier in April will take place.

Crucible turned out to be a really successful expansion from the standpoint of the EVE economy.  Figure 1 shows the monthly Gross User Product (GUP) in EVE from October 2010 until March 2012. 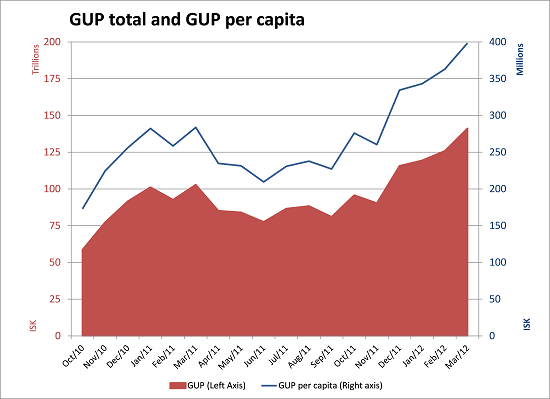 Figure 1:  This figure shows the total value created by players in EVE Online (Gross User Product - GUP).  Total GUP, in nominal terms, is shown on the left axis and GUP per capita is shown on the right axis.  The GUP takes a jump with the launch of Crucible at the end of November 2011.

Per capita GUP jumped by 28% between November and December 2011 and has just continued to increase since then.  This is attributed to increased production (Tier 3 battlecruiser anyone?) but also simply from increased activity in general due to both older players returning to the game and new players joining the pack.  Now as any economist knows, good times and good partying always comes at a cost  ;-) and in this case it is increased inflation in EVE due to increased aggregate demand.  Of course there is also the issue of balancing ISK sinks and faucets which you can learn more about here, so we will not dwell on that part in this short devblog.

The impact of Crucible and the announced changes that are upcoming in Escalation has been somewhat different than we have seen in the past.  In 2010 and 2011 inflation has been driven by price changes in more advanced items in-game, such as Tech 3 ships, Tech 2 items and moon material.  With Crucible things turned around and we saw the largest price increases in basic minerals and Tech 1 items.

It started with changes in Mexallon due to increased demand for the production of the new Tier 3 battlecruisers.   Figure 2 shows clearly the jump in Mexallon between November and December in 2011. 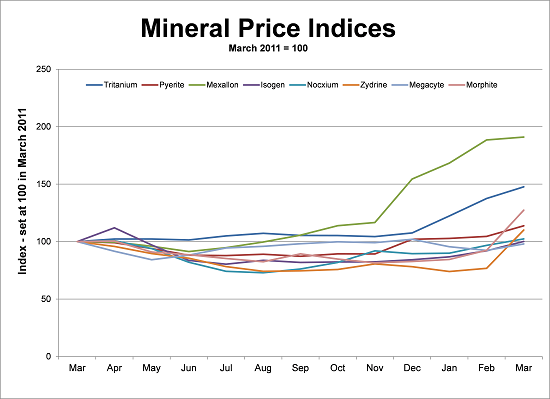 Figure 2:  Price index for all base minerals in EVE.  March 2011 set at 100.  Mexallon starts to increase in December due to the new Tier 3 battlecruisers which need mexallon in large quantities.  Tritanium starts to increase between December and January due to increased overall demand in the EVE economy and all minerals show an increase in price in March due to speculations on the upcoming changes in Escalation.

Another interesting change at that time is the increase in price of Tritanium, which has since continued.  This is attributed both to increased demand for production of Tech 1 items and due to speculations with hoarding ongoing in some areas of the universe.  Speculations seems to become the primary factor in March when we see a jump in Zydrine and Morphite prices.  It seems like the announced changes to the Drone regions as well as the removal of Tech 1 loot is doing exactly what we expected, creating some market uncertainities which will be interesting to see how the free market in EVE will adjust to.  Some might call it a market mayhem – a true Escalation to the Inferno! 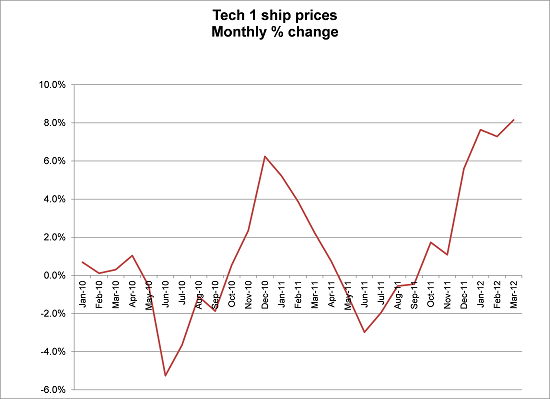 Figure 3 shows the changes in prices for Tech 1 ships.  As the figure clearly shows then price started to increase quite significantly at the end of 2011 and have simply continuned to increase since then.  The price increase is simililar to price increases we saw around the Incursion expansion

These changes are sharp but they are well understood and basically as expected due to the changes that are happening in EVE.   We do not know the future, but we do know that there are some interesting times ahead for anyone willing to risk it and try to outsmart the market.