You might or might not have noticed a thread a couple of weeks back where some rather tech-savvy EVE players managed to fiddle with a couple of files in the client, effectively enabling them to put their own video content onto the Captain’s Quarters main screen. Although we worship the sandbox and love it when you use our game to do things we could never have foreseen, we really don’t like it when people start fiddling with the EVE client files, mostly because it may get you into trouble the next time we send out a patch. We would much rather have you get into trouble within New Eden than outside of it.

The hack was as easy as replacing a .BIK (BINK) video file with one of your own .BIK files, putting you in charge of what’s on TV. Now, most companies would have branded this as a defect and “fixed it” by doing checksum validations on the files or something equally boring. But not us.

Drop by one of your Captain’s Quarters and finally put that sofa to some serious use! Your custom videos will be played one after the next, followed by the normal screen content. The entire loop is then repeated. 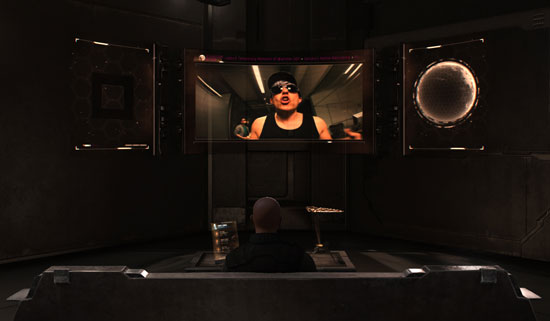 While this is all good and fun, we must not forget that with great televisions comes great responsibility. Of course, knowing our players,  we are of course absolutely certain than none of you would ever, ever think of putting anything even remotely questionable on your screen, given the total lack of constraints and the rock solid moral high ground on which our pilots firmly stand... That said, in a case of your cat accidentally downloading, converting and displaying some morally hazardous material on your screen, you’ll have to take it up with it rather than us, okay?

Since we’re on the subject of screens

There has been a myth floating around CCP HQ that a rogue programmer left a secret encrypted message somewhere on the three screens. The programmer in question seems to have lost the plot a bit since he keeps repeating the words “space equals 20” when he thinks nobody is listening. We would really appreciate your help trying to pinpoint what exactly is going on here.