Today I'm going to talk a bit about some of the math behind the warp speed changes coming with Rubicon (and I'm going to do it using graphs, which are vital to any good dev blog!) With the Rubicon expansion, there are going to be noticeable changes to your ship's mobility as you warp around New Eden.

For a long time, the options available for us to balance how ships warp around have been rather limited. The only really variable we could tune was the top speed. However, as I'll show later, changing this value only has a minor impact on the overall travel time of fast ships vs slow ships. Now that the ship rebalancing train has reached the Interceptor class - ships whose defining characteristic should be their ability to quickly get on top of a target - it was time to take the opportunity to do something about this. With these changes, we should see a more meaningful role for fast tacklers and scouts to be able to snare targets for their larger (and slower) friends.

Firstly, I want to make sure we're all aligned regarding what this does and does not cover. For the purpose of this blog, I'm talking about everything that happens in a warp AFTER your ship's velocity has reached the alignment threshold of 75% of its maximum speed, in a direction roughly oriented towards the destination. Before this point, your ship is simply aligning, not warping. Nothing we're changing in Rubicon affects this alignment phase, only what happens after you see the warp kick in.

A warp is split in to three phases - Acceleration, Cruise and Deceleration:

This graph shows the three phases for a cruiser hull performing a 30 AU warp. Acceleration takes almost 9 seconds, it then spends another 9 seconds cruising at 3 AU/s. Finally it spends nearly 22 seconds decelerating. All ships follow the same pattern, but with higher or lower top speeds according to their class. 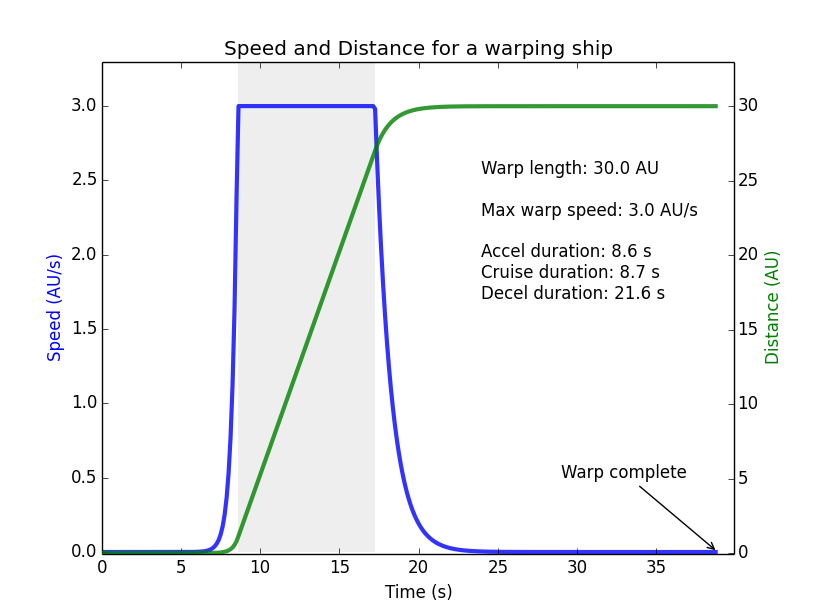 For various gameplay and technical reasons (something to do with hamsters and nanites), ships in EVE don't follow the physical acceleration models that we might be familiar with in the real world (or whatever your favourite digital simulation of real-life might happen to be) - specifically Newton's 2nd Law. Instead we describe their motion during acceleration with the following pair of equations:

where x is the distance travelled (in metres) at time t (seconds), v is the speed (m/s) at time t, and k is a constant (sort of - see later).

For the deceleration phase, the equations are similar, but with a negative time coefficient (and an offset to handle the time/distance elapsed during acceleration and cruise).

So, what value does k have in these equations?

In the old warp behaviour, k=3 (acceleration) and k=-1 (deceleration) FOR ALL SHIP TYPES. Those caps are there because that is important! All ships, no matter their top warp speed, would accelerate at exactly the same rate. This means that for the average warp, the majority of the time is spent following that same curve whether you are in a freighter or an interceptor. Let's illustrate this with another graph...

Here is a graph showing the speed of the same cruiser from earlier, along with an interceptor doing exactly the same warp. Note that even though the interceptor has the ability to reach a top speed 4.5 times higher than that of the cruiser, it only completes the warp a few seconds earlier. This is the ultimate problem that we've tried to solve with the changes in the Rubicon expansion:

For most warps, faster ships should be noticeably quicker at covering distances than slower ships, so that we can have meaningful differences between ship class mobility. 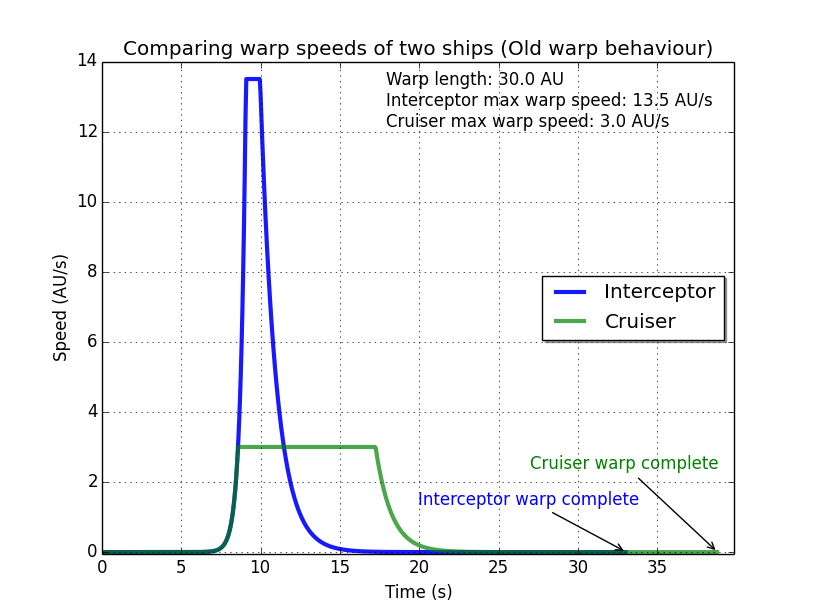 Remember that constant k I mentioned earlier? Well here's how we've changed things. For any ship, k is now a function of that ship's maximum warp speed. This means that ships that have a higher speed will reach that speed sooner than a slower ship reaches its own (lower) top speed.

For the acceleration phase, k is equal to the ship’s maximum warp speed (in AU/s).

For the deceleration phase, k is equal to the ship’s maximum warp speed (in AU/s) divided by 3, but with a maximum value of 2. This maximum is in place to prevent ships with excessively high warp speeds from decelerating out of warp so quickly that they transition from "in warp, many AU away" to "next to your battleship and firing up tackle" in less time than the server, client and player can reasonably handle.

Here's a comparison with the same two ships as they will warp post-Rubicon: 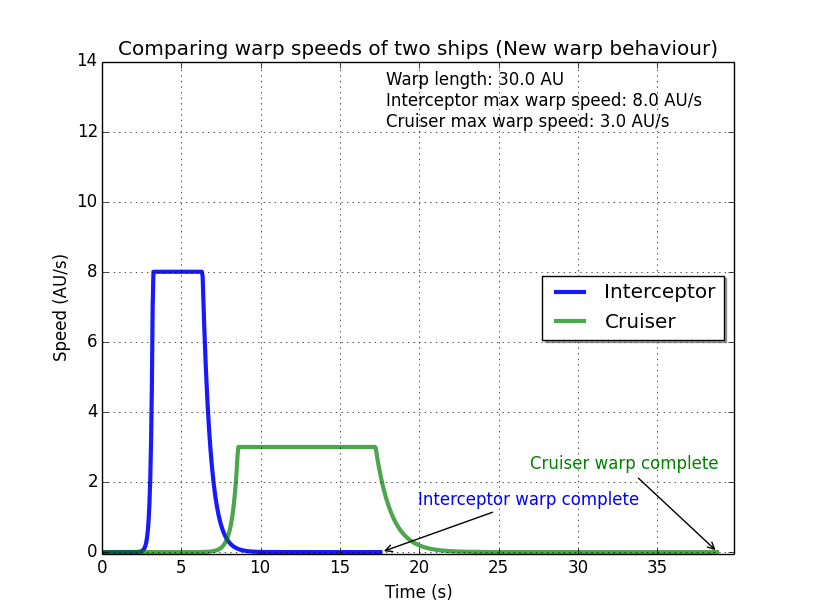 Observe that even though the interceptor's maximum warp speed has been reduced from 13.5 AU/s to 8 AU/s, it still manages to beat the cruiser to the finish line in less than half the time.

The current design has the fulcrum set on T1 cruisers. If you're flying a T1 cruiser with no modifications to your warp speed then you will not notice any difference warping in Rubicon. Every ship that warps faster than a cruiser will see their acceleration increased (and therefore see significant reductions in overall time warping) and every ship larger than a cruiser will see their acceleration decreased (and therefore spend more time in warp). The small ships are being sped up by a larger degree than the big ships are being slowed down, so the average warp speed across the classes of ships is getting faster. These numbers are shown in the following table:

Those are base numbers for each ship class. If you need to go even faster, then you have a few options:

Fleet warps will continue to work in the same way as before - all ships will use the warp profile of the slowest ship, so remember to Stay Aligned and you will arrive together! Similarly, acceleration gates will slingshot your ship using the same warp acceleration as a manual warp.

These changes are already on the Singularity test server, if you're keen to try and see how they feel. I hope you found this interesting, and that you enjoy everything coming in Rubicon.

Last one to that stargate buys the first round!

- CCP Masterplan and the Five 0 team