After a four-year wait, today marked the first day of the return of Fanfest – and it’s already shaping up to be a truly memorable one.

Today the vision for the future of EVE was revealed in the Fanfest 2022 keynote presentation. A selection of CCP developers shone a light on how EVE will move resolutely into the third decade with some exciting plans ahead.

If you want to watch the keynote in full from the comfort of your own home, you can watch the VOD from CCP TV here

If you're after the highlights, below are some of the major updates and announcements from the keynote.

A new narrative approach to development is being introduced through arcs, that allow you to participate in the story and directly impact New Eden and influence new features.

You can expect a number of exciting updates and changes down the road, as a story of the first arc unfolds over the next few months with plenty for players to discover and unlock.

We’re also moving towards reintroducing expansions back into EVE, with the first expected to arrive in Q4 2022.

FACTIONAL WARFARE ON THE HORIZON 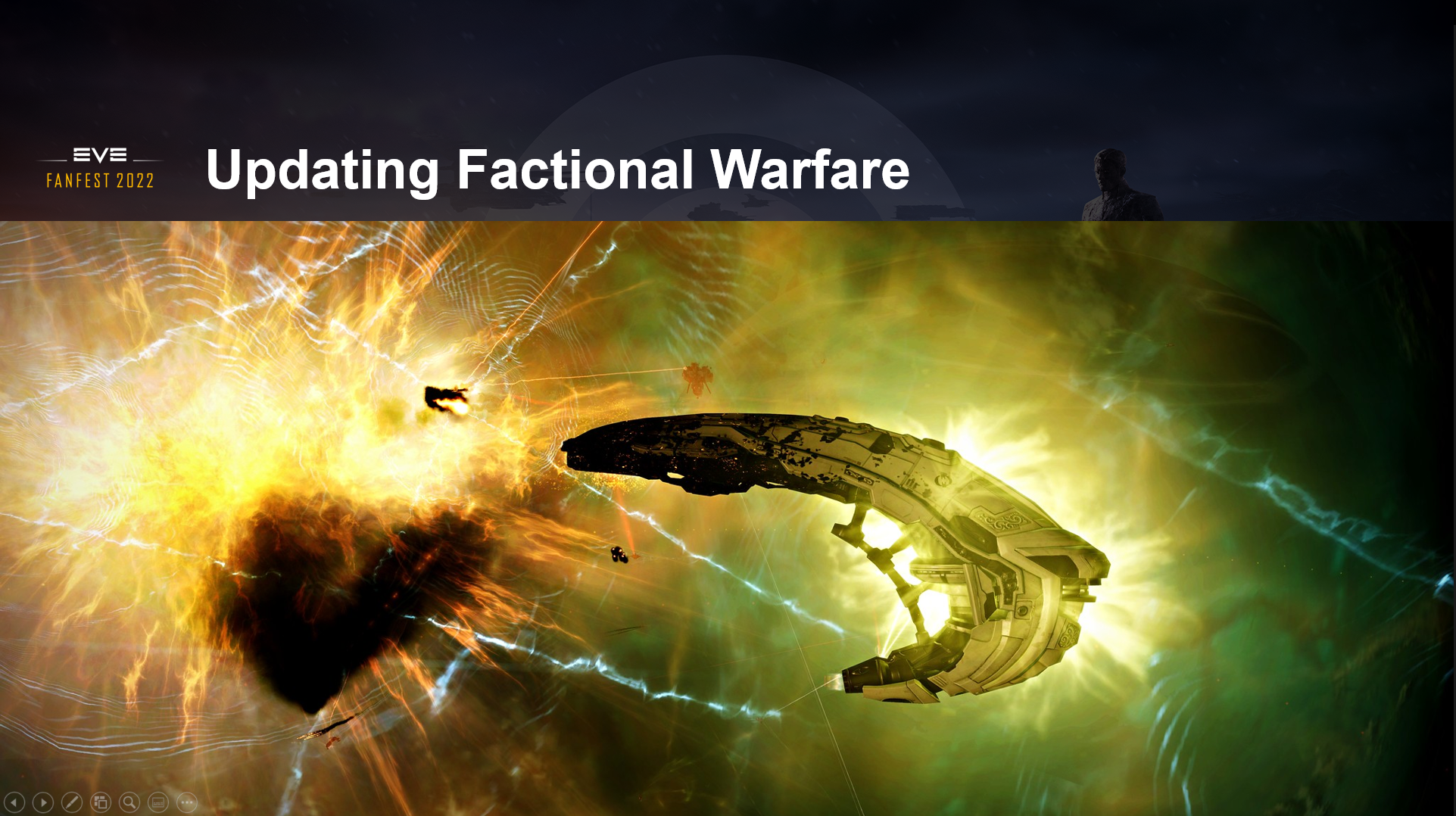 Factional warfare has always been an incredible part of EVE Online that has consistently yielded amazing player-driven stories. Going forward, making factional warfare even better, will be a primary focus for CCP, through future updates, expansions, and more.

Through a carefully planned narrative story and player-driven events, we will use factional warfare as a vehicle to bring updates to many areas of the game. Many of those are designed to spill out into other areas – such as Structure Mechanics, Territory Control, new ships, modules, and balance updates. Even brand-new activities – both inside of factional warfare and beyond.

We are planning to update how players declare their allegiance to factions in EVE. We will be introducing a new allegiance system, allowing pilots to participate in factional warfare content, potentially even without having to leave their current corporations.

We’re also planning to continue updating and making changes to the deployment, use, and role of structures beyond the latest Siege Green update coming 10 May – including within the zones of factional warfare.

We are looking to add more meaning to the geography of factional warfare space by introducing new fontline systems. Areas and systems that border on enemy territories will be declared frontlines and be clearly marked in the game so you can easily keep track of where the action is unfolding. Those frontlines will also offer increased rewards for pilots that scramble to help – and potentially even new, unique content. 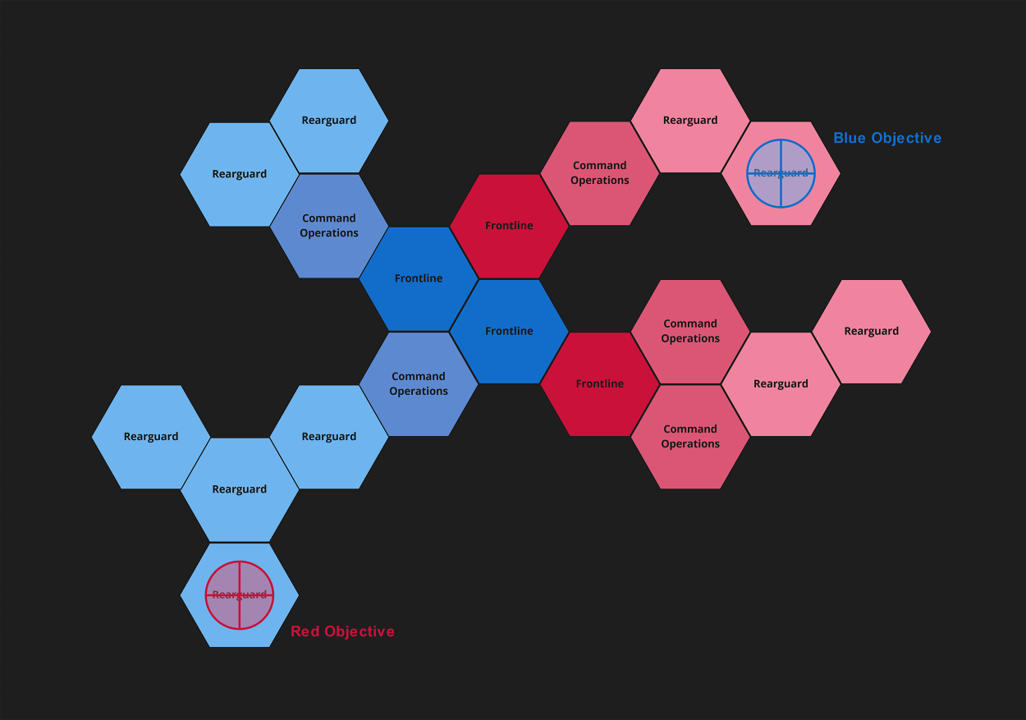 The work on frontlines is still in an early, exploratory phase. But there will be more to share tomorrow, at the EVE- A Living Universe presentation at 11:00 UTC. Be sure to tune in on CCP TV

HERALDING IN A NEW ERA OF IDENTITY AND SOCIAL INTERACTION 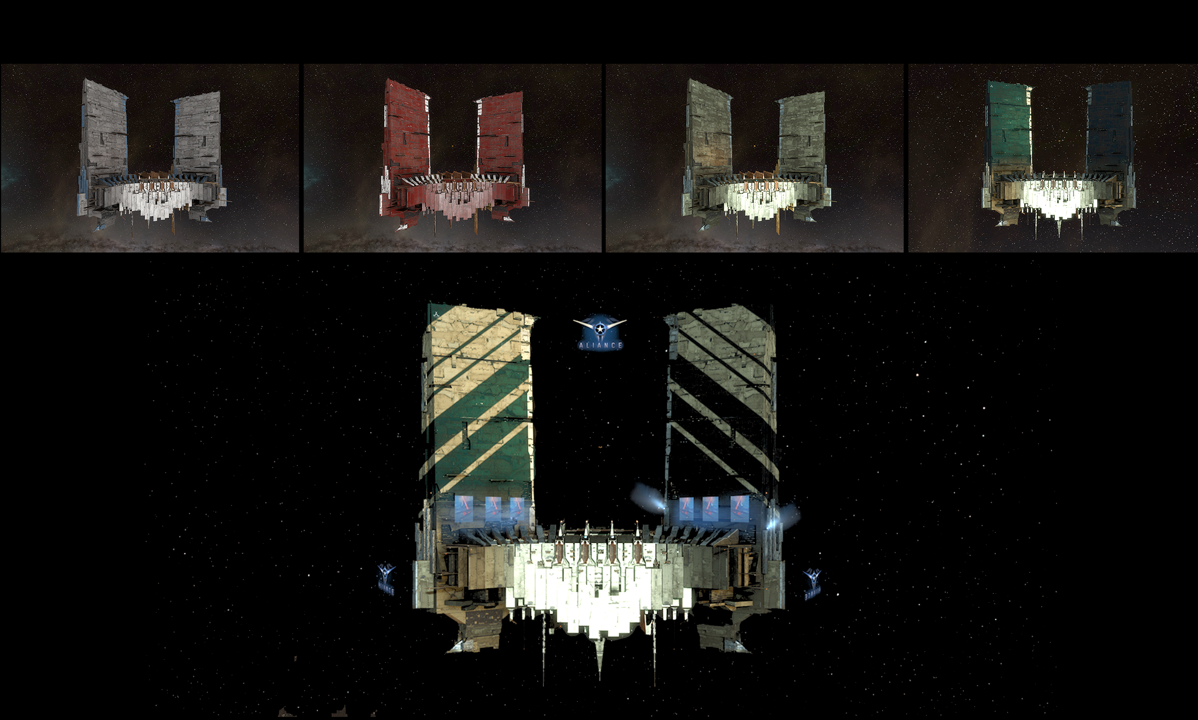 You will soon be able to display your unique identity and loyalty proudly on your ships and hangers through alliance logos, visual changes to your ships, holograms that reflect your social standings, killmarks, structure skins and other customizations attainable through InterBus credits, a new in-game currency. 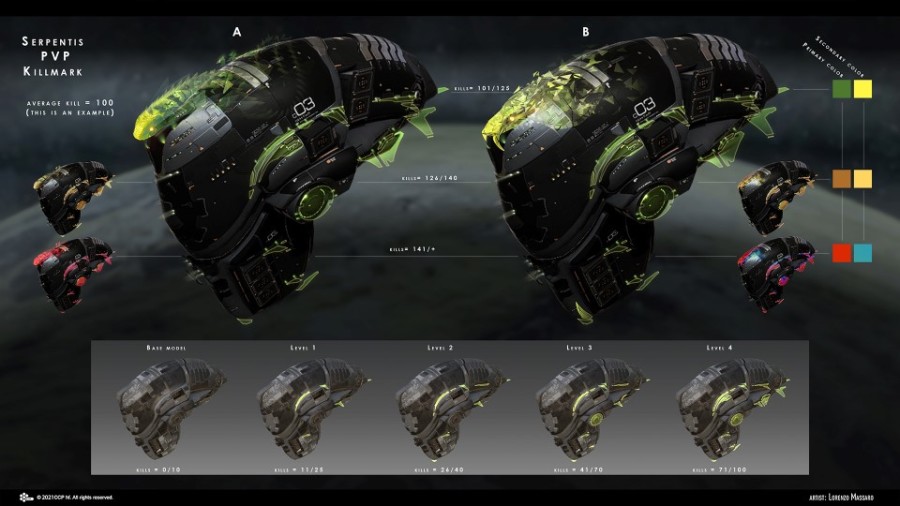 InterBus credits can only be earned in game. They can never be traded between Characters, sold and do not have a fixed exchange rate to any other currencies. 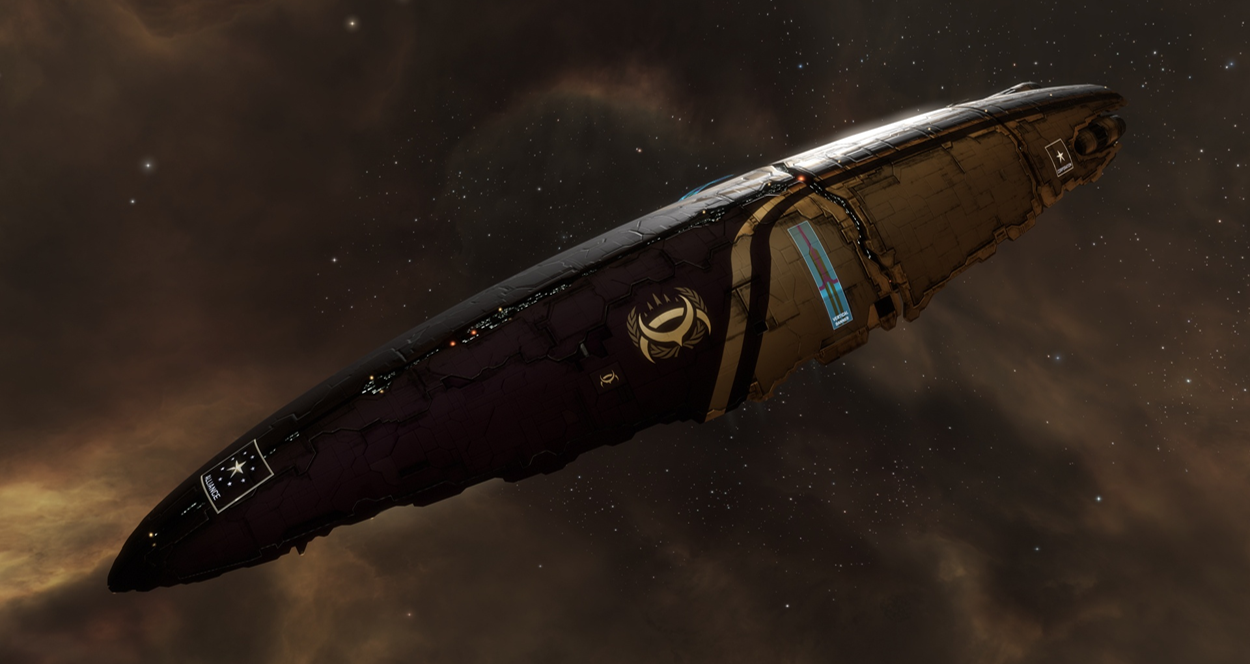 Welcoming new players to EVE Online continues to be a long-term focus with a lot of exciting updates on the horizon.

A new exploration arc will be added to the New Player Experience in early Fall 2022, marking the third instalment in the story that welcomes the star cluster’s freshest pilots.

We’re also overhauling the career agents and introducing a new AIR Career Program, to help new players get into their EVE career.

There’s also been significant work put towards Skill Plans in EVE, with the introduction of Certified Skill Plans with the ability to create Corporation Skill Plans coming at the end of 2022.

There are also some exciting changes that will benefit veterans as well including a rebalancing of all skills, removal of character attributes and a complete overhaul of learning implants. Tune in for a deeper dive on this at 12:00 UTC on the main stage Saturday. 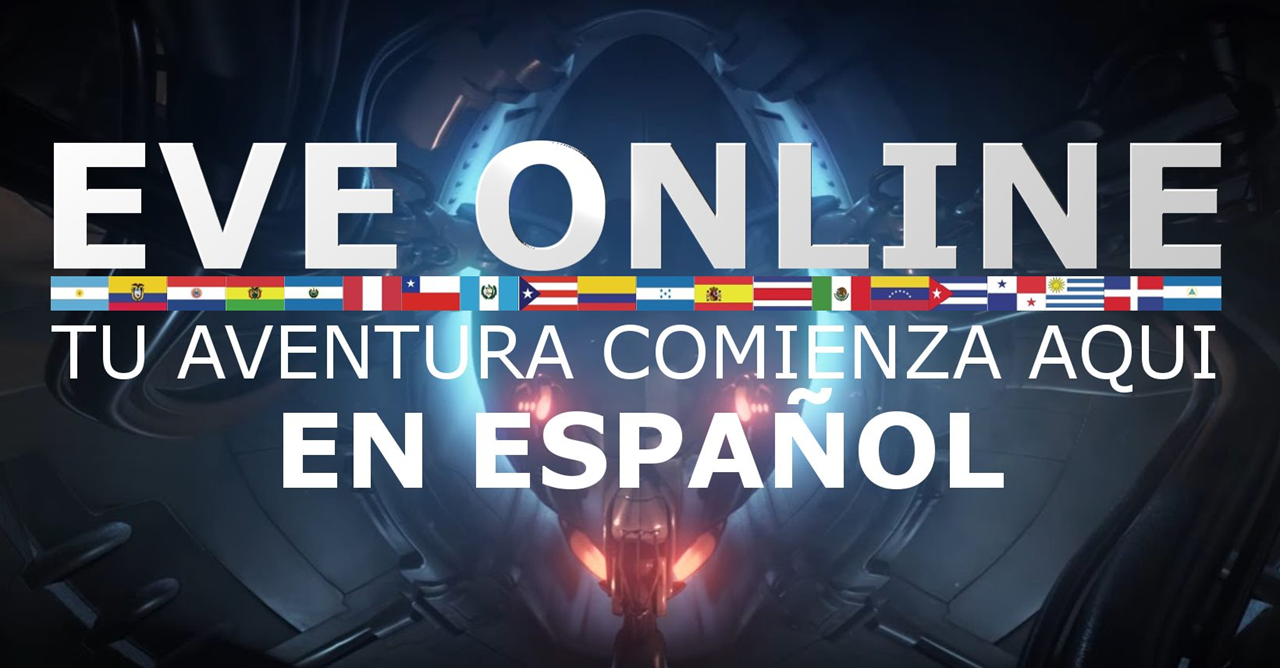 To give new and existing Spanish speaking pilots an experience tailored to their language, a Spanish version of the EVE Client is incoming. The first patch introducing early support for Spanish will launch in September, with the full version available in the winter of 2022. 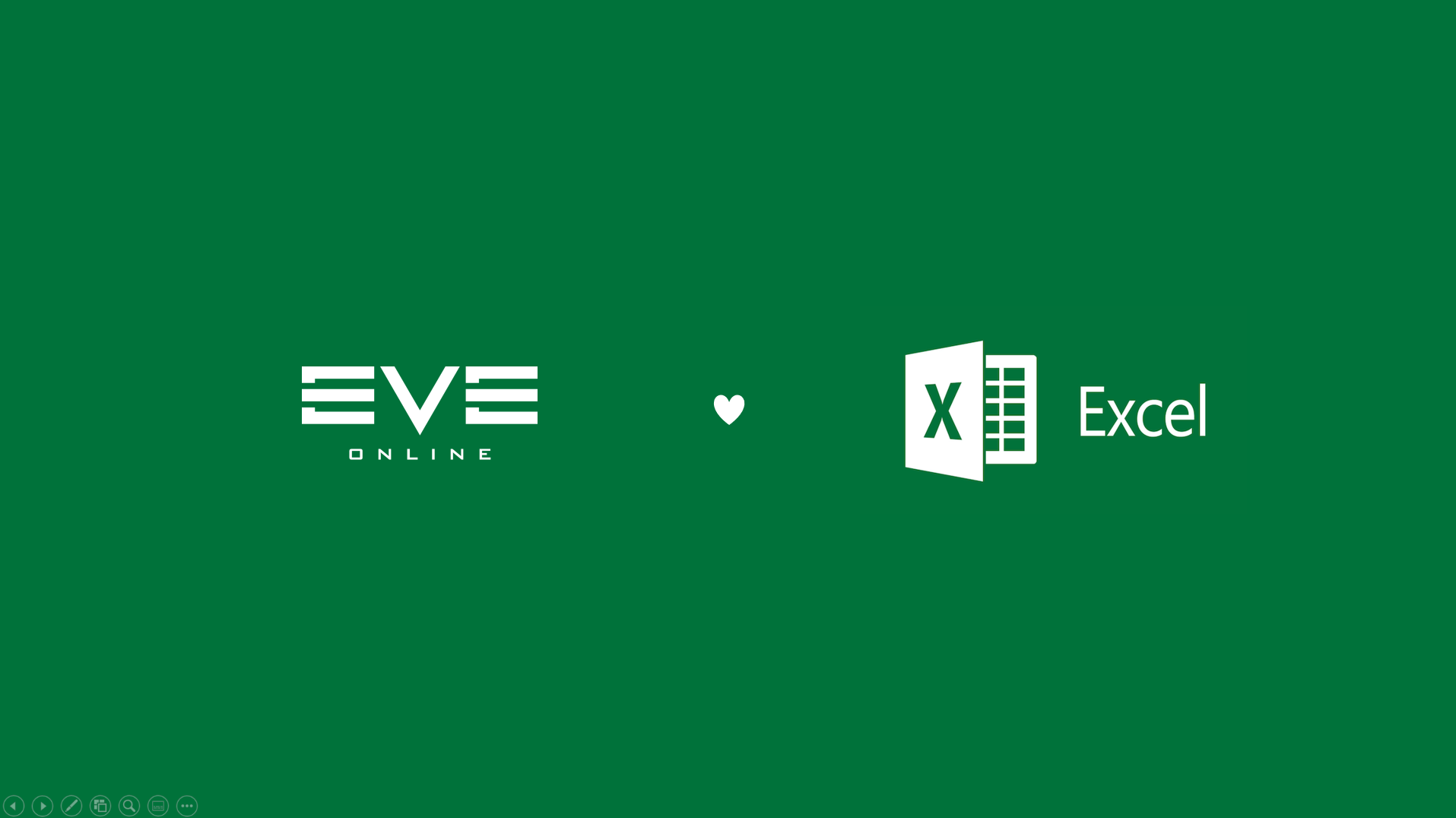 We’re leaning into the phrase ‘Spreadsheets in Space’ by partnering with Microsoft on a project revolving around democratization of data in EVE Online. Soon we’ll even be releasing an all-new extension that feeds data from EVE directly into Excel without any technical experience needed.

We look forward to sharing the protype for this project later this year.

The Capsuleers Chronicles’ second issue is out now, and free to download. We will have two more issues coming out this year with the hardcover of all four issues is expected at the end of this year. Preorders are available now!

MODERNIZING EVE FOR THE NEXT DECADE

The Fanfest 2022 keynote also included a number of other announcements that plot out the next decade of EVE Online.

We are continuing to put a great deal of effort into modernizing EVE Online through significant improvements to the UI. We’re excited to continue to improve Photon UI, and we're also continuing to explore other UI elements, such as allowing multiple overviews.

We're investing heavily in improving the overall visual and audio experience of EVE Online. Multiple visual enhancements are planned that will improve the look and experience of EVE, including high-resolution nebulae, level of detail optimizations, new paritical effects, and a stunning new docking animations which will ensure that New Eden becomes an even more stunningly beautiful place. This is being backed with technical support through the upcoming Fidelity FX Integration, improving performance for medium and low-end machines- bringing a more beautiful EVE to all.

There will be plenty more presentations, developer interviews, announcements, and more as Fanfest continues on that you can catch live on CCP TV. Be sure to tune in, because we’ve still got lots more to share with you.

And in closing, here is a special message from Chairman Akimaka Saraki, Chair of the Chief Executive Panel and head of state for the Caldari.