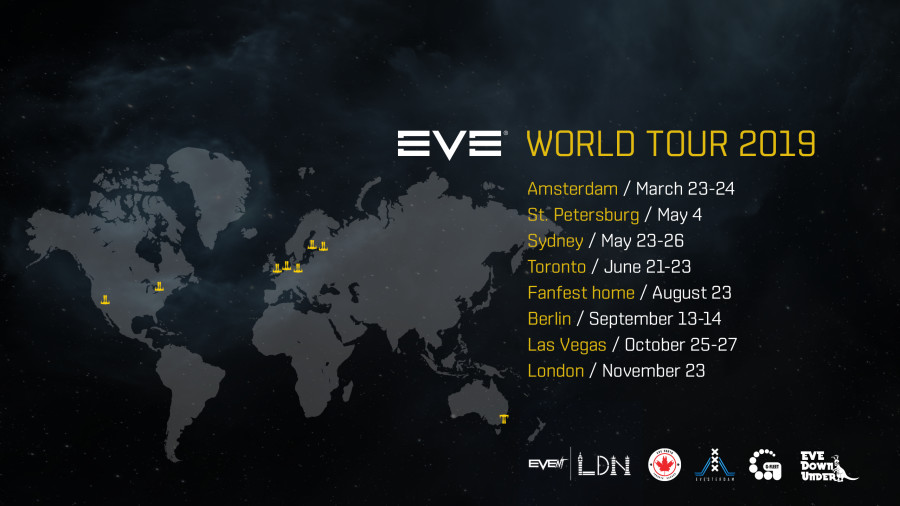 I am here today to inform you about your vacation dates for 2019 and to announce the locations for the EVE World Tour.

At Fanfest in April, and EVE Vegas in October, we promised we would take EVE on the road next year.

We talked about how it was time to try new things and use the resources from Fanfest to meet new people, to bring EVE closer to you than ever before and, create unforgettable experiences in several different locations around the globe.

At EVE Vegas we shared a glimpse of some destinations for next year and since October we have been working closely with leading event organizers from the EVE community to bring events to life.

We have joined forces with Streamfleet and their army of streamers to deliver the best viewing experience to those who can't join us in person.

Now, I am pleased to share the list of cities that will host an official World Tour event next year:

The good people behind EVEsterdam have laid a solid foundation and made Amsterdam one of the world's party capitals. A keynote presentation will kick off the tour and give insight into what lies ahead for EVE, players and developers will speak, battle in spaceships and of course explore the Amsterdam nightlife.

We look forward to connecting with one of EVE's largest and most passionate communities in Russia. We hope to gather players from around the region for a day of merriment, spaceship action, amazing developer-led sessions and exclusive content.

EVE Down Under has harnessed the unique Aussie community spirit for years and we are excited to partner with them for a weekend of presenations, developer sessions, spaceship brawls and upside down partying. We are confident this event will have no downtime.

The first official EVE event in Canada´s proud history will take place in beautiful downtown Toronto in partnership with EVE North, the stalwart organizers of countless, regular local meets. We look forward to showing Canadians, and travelers from the eastern seaboard, everything that a proper official EVE Online event has to offer.

From one great city to another...

This event differs slightly from the rest. As a result of the Fanfest HOME video competition, we will host a personal, home-sized version of the legendary Fanfest in a player’s living room. Of course we'll invite everyone else to watch what happens because it wouldn't be a Fanfest without a live stream.

The G-Fleet crew always puts their heart and soul into making their events extra special and with CCP's full backing we're certain this one will be wunderbar. A perfect mix of community passion and official content in the heart of a great city.

The legendary EVE Vegas needs no introduction and will of course be part of the EVE World Tour in 2019, bigger and crazier than ever.

If we know the UK community, they will no doubt flock to London for this epic finale, closely co-produced with the EVE London organizers. We'll look back at 2019, look at what's ahead, blow up some spaceships and conclude the World Tour with a massive London party!

These are all the details we have for now and we hope this gave you enough insight to plan your year accordingly. On January 15 we will announce ticket sales and more details about each event will start to emerge around the same time.

Before we end this, we'd like to give a shout out to all the community event organizers who will be running their regular events throughout the year and we urge you to keep an eye on those as well. There's one new very special event organized by the queen of event volunteers, Greygal, that we'd like to award honorary World Tour status. Cruisers of EVE, a first time, 7 day luxury cruise for hard working capsuleers, between Seattle and Alaska.

Have a wonderful holidays and we'll see you in 2019!