I'm CCP Ripley. You may have known me previously under the name CCP Nerfherder, which I used when I was manager of game design and content. Unfortunately, Nerfherder came to a fiery end after a suspicious in-game scandal (no doubt some lucky pilot out there in New Eden still has his frozen corpse). Officially I blame it all on CCP Tuxford, of course, because blame just looks so good on him.

Anyway, a little bit more about me. I am now the Senior Producer for Release Development. This means I'm producing the next release as well as preparing for the release after that. I run around the development floor all day trying to solve problems or trying to bring in the right people to solve the problems. I basically try to align all the things we want to do with the things we are able to do. In the words of Winston Wolfe: “I solve problems.” So with that out of the way, let's have a look at what the teams are working on for this expansion, Retribution.

Team Pony Express is all about the player experience and they know that it's usually more fun and beneficial to gang up with other pilots. Therefore the Ponies are improving the corporation recruiting interface, making it easier to search for a corporation. They're also improving the UI for corporation advertising, in addition to which they're going to give us some improvements to the whole recruitment process. Team Pony Express is also working on making the inflight UI a little nicer for all of us.

Team Five-0 are working on law and order. After reworking the backend system for Crimewatch in the last release they are set to focus on changes to game play including simplification of our flagging mechanics and making all timers visible in the client. Team Five-0 are also taking a look at the rogue drone regions so you will see new and improved content there. The NPCs are also getting some love with the team working on a new NPC AI.

Team Super Friends wanted to shake things up a little bit. For one, they want offensive actions to have consequences, regardless of whether they are player-to-player or corporation-to-corporation aggression. To this end, they are working on a new bounty hunting system. In Retribution, players will be able to sell kill rights as well as place bounties on characters, corporations and alliances; and that's just scratching the surface of the changes made in the new system. The team has been working with the CSM taking their input into account.

Team Game of Drones is working on the Inventory and Factional Warfare. Since launching the inventory changes in the last release they've closely followed your feedback on it, and based on that feedback you will see a lot of Inventory improvements and iteration when Retribution rolls around. Team GoD has also iterated on Factional Warfare by adding some really cool stuff in the process. In addition to that they are also working on rebalancing frigates, destroyers and cruisers.

Team Gridlock has been working on missile acceleration fixes so the projected range of missiles will now be more accurate. They have also been improving inventory operations, both optimizing the movement of large number of items between locations and introducing fleet hangars in ships.  Another thing they’ve tackled so far is a new backend configuration system allowing e.g. access configuration and forcefield passwords on ships to persist indefinitely over jumps and over downtimes.

Team Klang is responsible for the sound in the game. They are working on new turret sounds designed to better capture the scale of battle and sound good at different distances. They are also making different music playlists play in hisec, lowsec and zero sec to capture the mood of each region and connect better with the visuals of each security band.

Team TriLambda are specialists in visuals. They work on almost everything graphics releated in EVE including spaceships, turrets ,explosions, graphic engine features, tools, pipelines plus a whole host of other good stuff. Amongst the items they are working on for the Retribution release are  4 new destroyers, added to that you will see upgraded graphics for the Tempest and it's factional variants like the Vargur. The Stabber and it's factional variants will also get the same treatment. This release they are working on the visuals for new ships, such as the new destroyers and the Ore mining frigate. Finally, Team TriLambda is also working on the Planetary Visualizations for the EVE part of DUST 514. 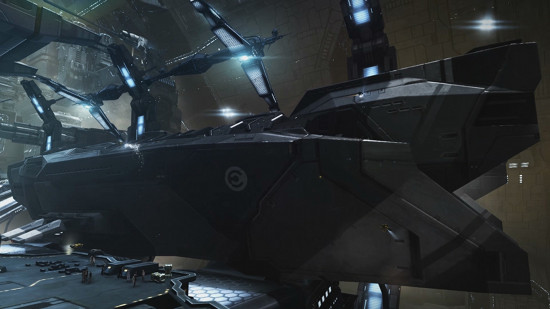 Well, that's it for me this time around. Keep your eyes and ears peeled for more juicy tidbits from the teams, as we ramp up our efforts to bring you the best expansion we possibly can. In the meantime, fly safe, enjoy the game… and if anybody knows the whereabouts of that Nerfherder corpse, I might want a word with you…