Welcome to an update on some of CCP’s anti-cheating efforts in 2020. There is a lot of exciting stuff happening so let’s dive right in!

One of the recent changes is an automatic reply sent to all users whose in-game bot reports led to CCP taking action. This has driven use of the Report a Bot feature and added a much-needed feedback loop to make you all aware of the work being done daily to keep Tranquility healthy.

It is important to note that CCP never bans players based on reports alone, and each case is investigated and reviewed by the team.

Let’s have a look at some numbers:

Here is a visual representation of the year so far, in terms of amount of reports sent:

It is fantastic to see how many of you are actively helping by sending in reports! Here is an anonymized top 10 list with the number of reports individual Capsuleers sent which have resulted in permanent bans:

Thanks to everyone for their reports so far this year and please keep them coming! Of course, there is still much work to be done, but sending a report is the best way to get potential cheaters on the security radar.

If you simply can’t get enough of juicy graphs and botting talk, it is highly recommended that you watch CCP Larrikin’s talk from EVE Vegas 2019.

Plans to reward people for reporting bots are currently being evaluated.

A quick recap of how bots are handled at present:

The next graph tracks attempts at hiding from the law, year to date.

You can see an increase, and many people banned for botting nowadays know full well that it is against the rules. Bringing these numbers down is currently one of the key focuses. 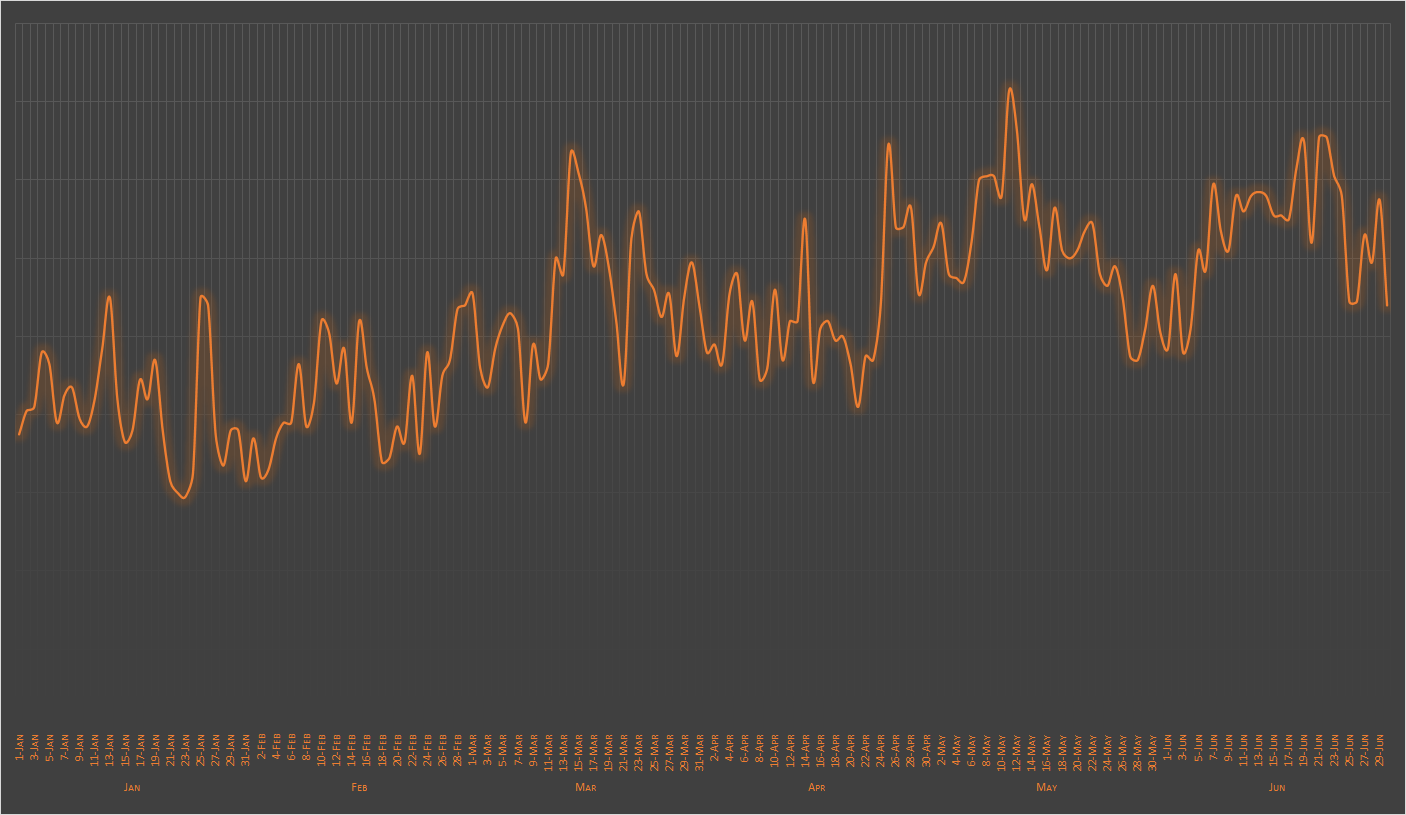 Moving right along, this graph shows connect events from NVIDIA’s IP’s, and the teal line annotation is the launch date of their GeForce Now cloud-based game streaming service.

Disclaimer: the gap in May should be disregarded

Using GeForce Now to play EVE Online is great and allows you to play on essentially any device if you have a good connection speed. It is allowed and not against the EULA.

This is being mentioned primarily because there were some reports earlier this year of people being banned for playing through the service that were unintentional. This should all have been corrected, but if not, please contact support to have your case reviewed.

Here is an illustration showing that bad guys are actively trying to get into legitimate players’ accounts:

The flat yellow/orange line is your baseline for a healthy EVE Online, and the spikes are attacks, where groups driven by financial motives are trying to break into EVE Online accounts. If you log into your account and check https://secure.eveonline.com/LoginHistory.aspx you might be able to see some of the activity.

So please, please activate 2-Factor Authenticator today and protect your assets. Dormant accounts are particularly at risk. Also, for your own protection, NEVER reuse passwords anywhere.

This kind of malicious activity is driven primarily by Real Money Trading (RMT). Another way to help is by not participating in such things and educating others, particularly new players, about the illegality of it in order to raise overall awareness. You especially do not want to be on the receiving end of stolen goods, whether it’s your corpmate’s brain goo or PLEX originally bought with a stolen credit card. If you purchase EVE assets from illegal third party sites, you are a part of the problem.

Thanks for reading and stay safe!