State of the Union | EVE Online

State of the Union

It’s been several months since Fanfest, where we announced major updates to Factional Warfare. Since then, there has been a lot of progress made to bring some of the ideas discussed during those presentations and roundtables to life. For those that want to revisit this topic from Fanfest, you can watch the EVE – A Living Universe Presentation here.

There are a lot of exciting elements when it comes to Factional Warfare, and here you can get an update on how things are progressing on the frontlines of development as we march towards introducing these features later this year.

For those looking to dive in on these topics, tune in to the CCPTV stream tomorrow (4 August) at 15:00 UTC with CCP Psych & CCP Aurora!

When the exploration of Factional Warfare began, one major thing that was considered was the scale of warzones as they are currently very spread out. When each system is essentially the same as the next, and the optimal strategy for earning LP is to try and avoid conflict, it makes Factional Warfare feel more like scavenger lands rather than an active warzone. Additionally, for Factional Warfare newcomers, or those not yet in established Militia groups, it is difficult to know which systems are important, and which objectives you should go after.

Frontlines also helps to give the warzone shape – as systems change hands players can very clearly see the progress of their faction as it moves across the warzone. 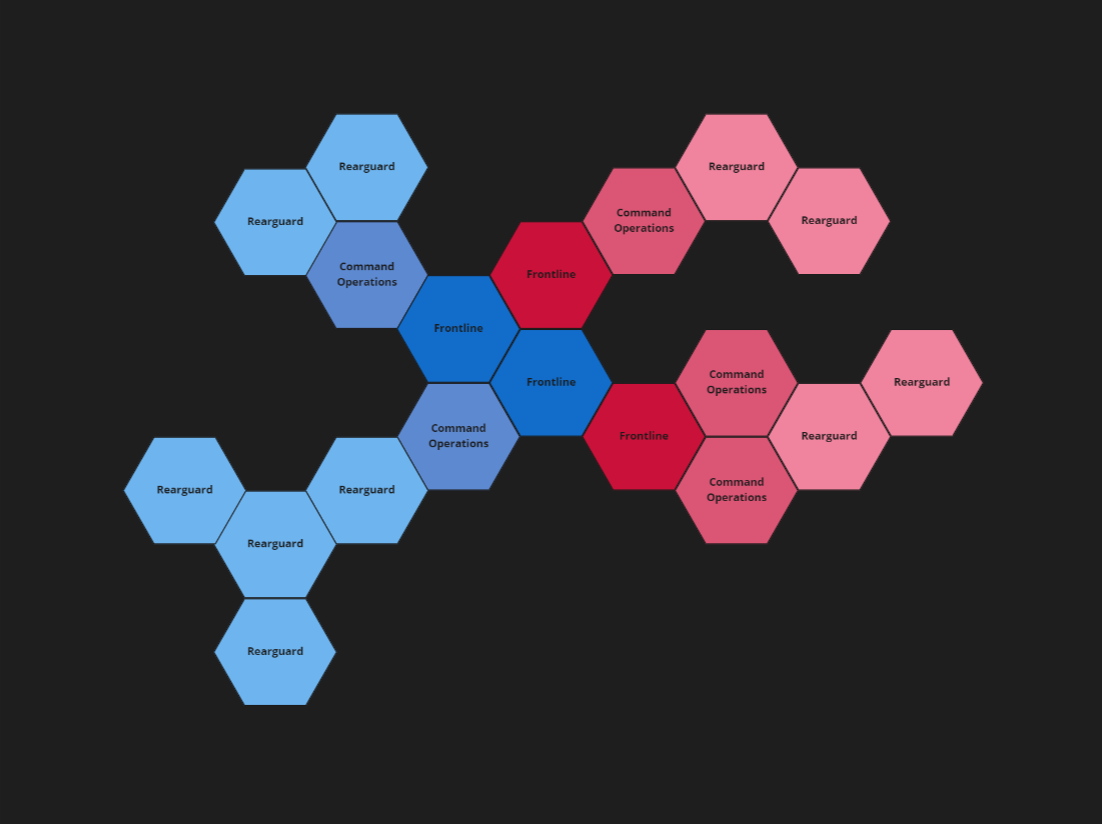 There are a few different system types that will be part of the new map:

This system also provides new opportunities and objectives which challenge factions to push the frontline and capture key systems. The details about these new objectives are being kept under wraps for now, but the possibilities are exciting, and we look forward to you discovering more as the ongoing story emerges in New Eden!

Factional Warfare complexes play a massive role in FW life – they are in-space conflict drivers where players fight for system control, earn LP, and interact with each other. An update to the existing complexes is underway, adding more variety of sites, with the goal of ensuring players can easily understand what type of site they are warping to by updating the naming conventions.

This new naming system aims to add more clarity on which ships are allowed in these sites. The idea is to make each complex name consist of three of the following elements (names subject to change):

These attributes would form the name of the complex. For example, a Medium NVY-5 Complex would be one that only allows T1 or Navy ships up to cruiser size and has rewards which scale up to a group of 5 members.

New complex site types will be added as part of this including the sites with new Navy and T1 restrictions as well as Frontline specific sites which have rewards that scale up for small groups.

A rework of rewards (both Loyalty and Victory points) will put a greater emphasis on larger complexes, while ensuring smaller ones are still useful. LP rewards in some frontline sites may also scale with the number of players, allowing small groups of allied players to naturally form. We hope you find some fleetmates – or even new corpmates - out there!

Conquering a system takes more than just combat prowess. When an empire goes to war, there are many factors at play which the current Factional Warfare system does not take into account: factions have materials that may be needed, battlefields to be salvaged, resupply routes to be considered, and propaganda that needs to be spread.

A new system is being developed to address this which we're currently calling the ‘Advantage System’ (name subject to change). The main goal behind the Advantage System is to allow players to support a faction engaged in FW, giving them a leg up through meeting specific objectives in the system.

These objectives which help to support a faction will grant them ‘Advantage Points’ in each solar system. This isn't just a single bar that each Faction must max out for efficiency - instead, the ‘Advantage Bonus’ comes from the net difference between the two factions in each solar system as demonstrated in this chart. 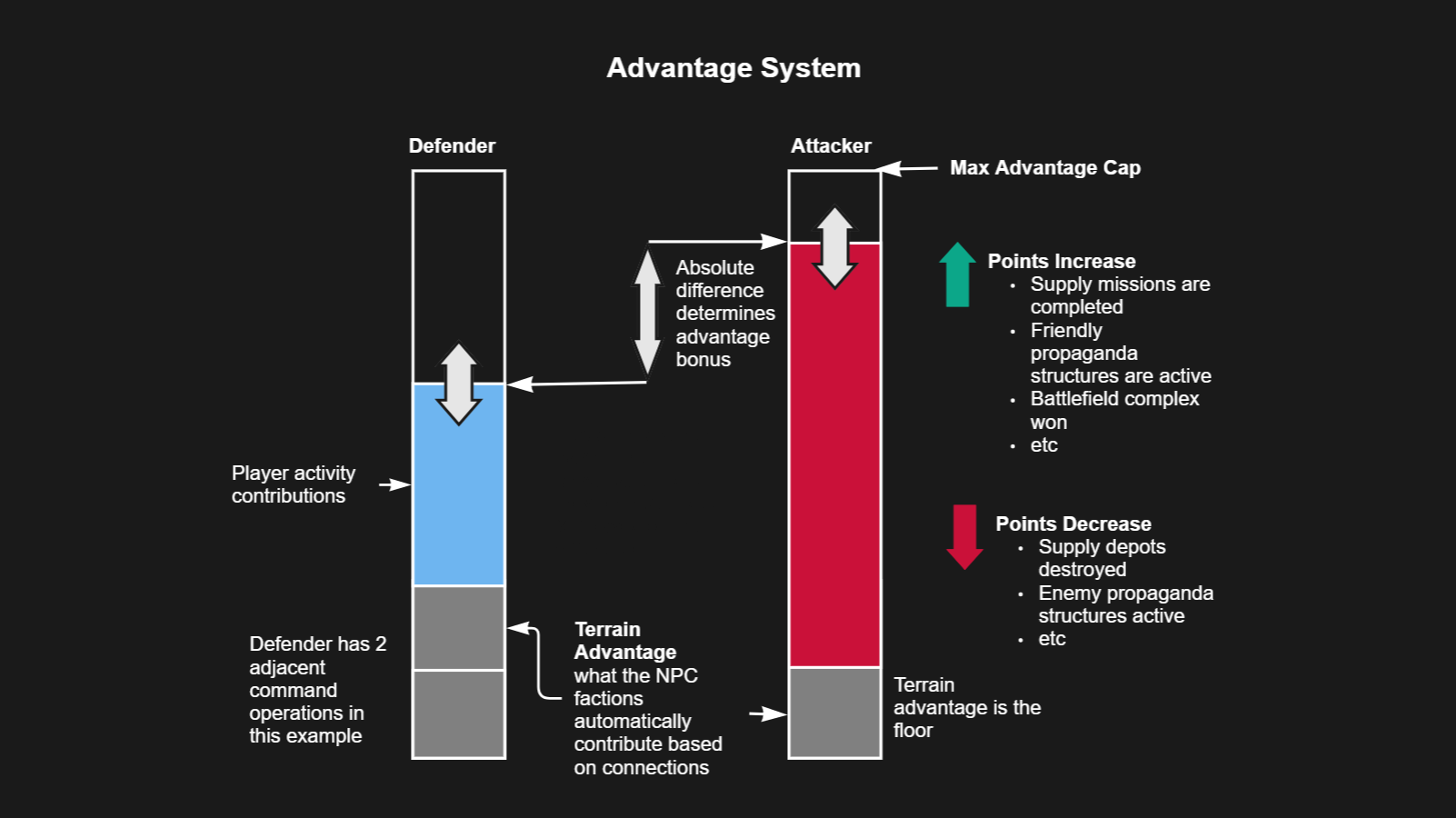 The ‘Advantage Bonus’ modifies the Victory Points rewards for the faction in the system with the net advantage bonus. The Advantage System will also allow a variety of new objectives to be introduced to Factional Warfare without the need to develop new systems, which means way more exciting upcoming challenges for you to tackle.

We look forward to going into more detail on this new Advantage System and how it impacts your life in EVE in upcoming streams, Q&As, and future blogs.

You’re already beginning to see this new Advantage System play out in the first narrative arc, which will become part of the narrative prelude to further upcoming Factional Warfare changes. Some of you have already risen to the call from Empire leaders and have helped discover and decipher clues scattered throughout New Eden that provide intelligence on how events are progressing. The goal with arcs is to make the universe gradually change – which you can notice, and even take part in.

We’ll be going into more detail on the status of the first arc and narrative driven development later, but if you’d like to keep track of how things are heating up amongst the factions, participate in the storyline, and speculate on how ultimately this will impact Factional Warfare in EVE, you can follow the #NewEdenNews on Twitter and keep your eyes peeled for clues. 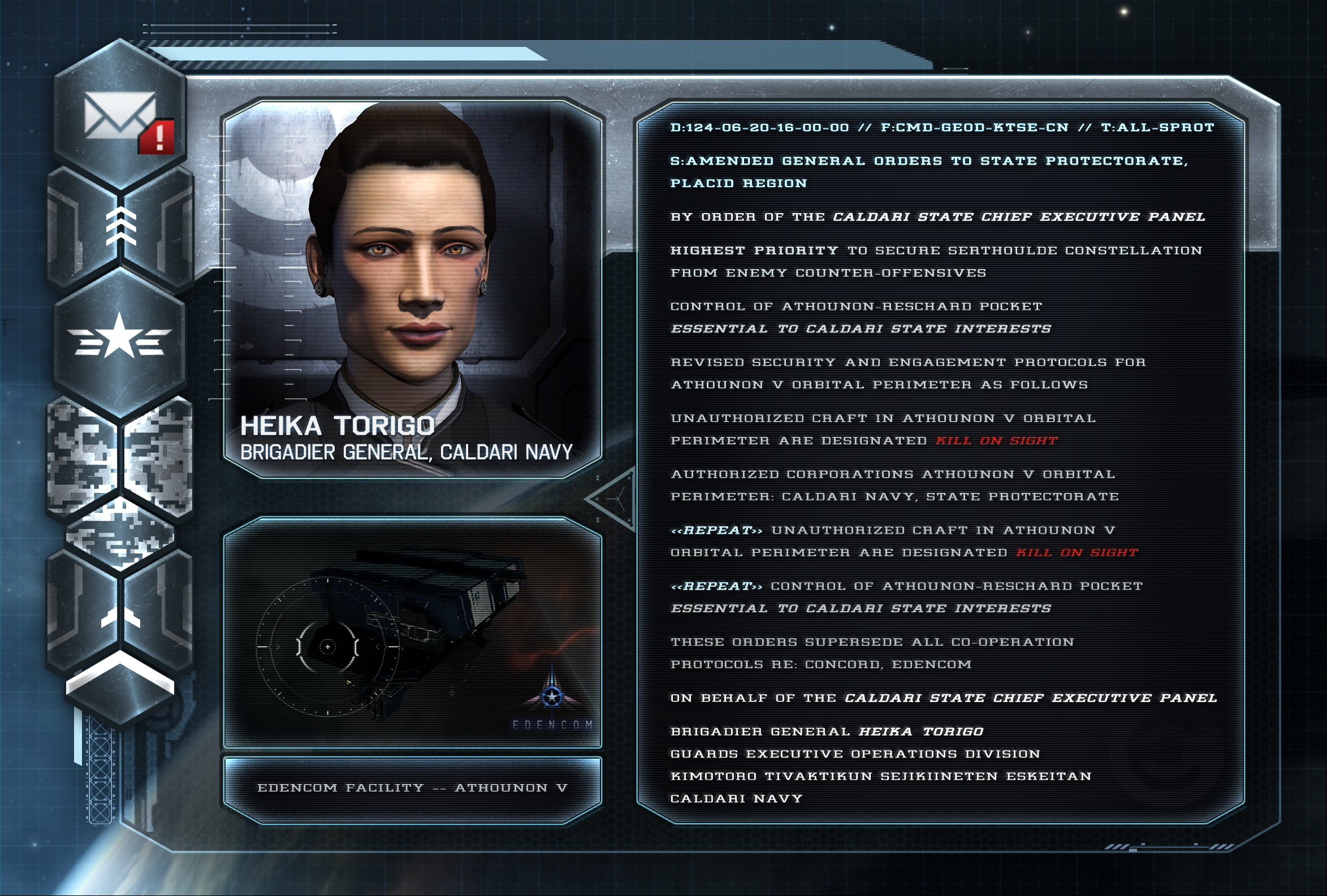 That’s all on Factional Warfare plans for now. Be sure to tune into the CCPTV stream this week to learn more. If you have any questions, you can submit them here and we’ll answer as many as we can during the Q&A next week!

Until then, fly safe capsuleers!

To join player discussion about Factional Warfare & Frontlines, please head over to the official thread on EVE Online forums.