The New Eden Universe is a wonderful place, filled with amazing visuals and beautiful graphics. Since the earliest of times its beauty has inspired the EVE Community to develop and produce videos featuring New Eden’s incredible environments and sceneries.

Amongst all the amazing videos produced so far, we have one video series that needs special mention. One could easily fill an entire evening by immersing in its thrilling story of a time and place where heroes are real heroes, where spaceships are rusty and held together by duct tape and where space battles deliver the tingling sensation of pure excitement.

This place is our New Eden Universe and this is the story of John Rourke and his Clear Skies! 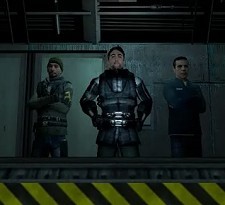 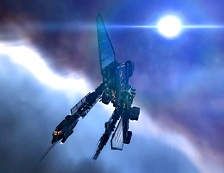 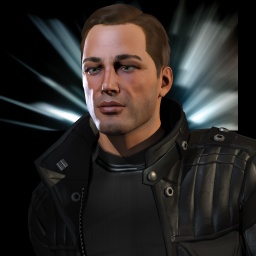 The crew of Clear Skies

Clear Skies is a machinima movie series in three independent parts featuring Captain John Rourke and his battleship Clear Skies (hence the name of the series). According to the author and producer, the general setting of Clear Skies can be described as “Red Dwarf meets Serenity”. The combined total playing time is 160 minutes and with more than 300.000 views to its name, the series can safely be considered quite popular.

Three main characters appear in all parts of the series: Captain John Rourke who can be described as an old school “my-way-or-the-highway” kind of guy possessing excellent skills which he attempts to hide behind a seemingly ignorant attitude. Charlie Fodder is the ship´s gunner, a man who really enjoys knocking holes in other ships with the assistance of the ship's massive Howitzer artillery cannons. Being very good at his job, he seems to prefer the brute force approach to problem solving. Solomon Burke, the ships engineer, completes the trio. He usually ends up getting the ship out of whatever trouble his other two buddies got it into in the first place. Even though he is somewhat pessimistic about the abilities and skills of his two friends, he is very loyal and always willing to come to the rescue.

The general space cowboy underdog attitude of John Rourke and his crew, while fighting misfortune and powers that would like to hunt down and blow up Clear Skies for various reasons, feels like something the average EVE Online player could experience quite vividly in the game itself.

Ian Chisholm, the author and producer of Clear Skies, is a veteran EVE player from the first days of EVE. He worked for almost six years on this massive project, spending over 4000 hours creating his masterpiece.

Following his first, more traditional videos (involving clips from EVE Online set together with music), Ian discovered the potential of the chroma key effect in combination with the Source engine and decided to follow his dream of telling a full story. The combination of this 3D engine, the availability of characters together with EVE Online’s stunning space visuals became the foundation. But it took another two years to finish the first episode of Clear Skies. First a proper script had to be written (Ian emphasizes the importance of having a rock solid story finished before starting any filming), the ability of the Source engine had to be tested and then the exterior shots had to be included into forming a proper story.

Lip synchronization is a challenging problem in every machinima and for Clear Skies this problem was solved by manually lip-synching every line of text in the Source engine. The lip-synching for the first two films was done by Ian and the third part was done by a friend. While lip-synching is extremely time consuming and very difficult (possibly the most taxing part of the whole project), it is also very important for the immersion of the audience.

For Clear Skies 3 Ian Chisholm also used iPiSoft´s motion capture system.  It was in beta stage at the time so Ian helped with the development of the software through the development of his own project.  IPiSoft uses three Logitech webcams to track a person in 3D space and to produce motion data for injecting into the characters – the results in Clear Skies 3 are quite spectacular!

So far, Clear Skies has been download from EVE-Files, and viewed on YouTube, more than 300.000 times. This high popularity is even more astounding when you take into consideration that the promotion of the project is mainly done by the EVE community itself on a word-of-mouth basis. Clear Skies is neutral in regards to corporations and alliances and it is quite easy for EVE Online players to identify themselves with the main characters, the situations the crew finds itself in and their means of solving them, as well as the humor involved.

Clear Skies is recognized beyond the EVE Community in its own right as full SciFi machinima masterpiece and not only as an EVE movie.  Clear Skies 1 won the Mackie Award in the category Best Long Format Film at the New York Machinima FilmFest 2008 and the Grand Prize Jury Award of the Machinima Expo 2008. Clear Skies 2 won again the Grand Prize Jury Award of the Machinima Expo 2009. It is an interesting side note that some of Clear Skies’ fans had never heard about EVE Online or the New Eden Universe before they saw these films. The Clear Skies series is candidate for the Dragon Slayer Award 2012 (the voting is still open at date of publication of this Spotlight).

With the great succes of Clear Skies it might be sad to hear that Ian has no plans for a fourth part. He has pushed the borders of the machinima format further than anyone before him, and moving even further would require a massive budget of both money and time. Asked about the most rewarding moment in regards of the whole Clear Skies project Ian answered that it was watching Clear Skies 3 on a cinema screen with 70 other friends and family members – certainly a wonderful experience. Ian has for sure our thanks for creating such a wonderful and exciting piece of art!